Twenty years after the blast the common population is dwindling. Struggling to get food, water, and other necessities of life the people continue to push on. If things weren't hard enough already a plague called Green Lung has a tight grip over the population. There is no cure, but a vaccine that can hold back the illness from becoming terminal. But the governing body, called The Aristocrats, are careful to whom they give out such a precious supply to. Citizens can take jobs from the government to gain a lottery ticket to try to win a vaccine for themselves or another in need. Amy Wellard starts off on one of these difficult missions risking her life for a chance of such a wonderful prize, but the events that are ahead of her are far more dangerous and heart pounding than she could have ever imagined. Shardlight is an indie point-and-click adventure by Wadjet Eye Games, the same team who also brought us Technobabylon, Gemini Rue, and Primordia. This dark and gritty post-apocalyptic tale is filled with astute puzzles, astounding artwork, and an amazing story that is easy to get lost in.

Everything in this adventure is done with the mouse. Click to interact with something, and right-click to examine. Your inventory is at the top of the screen and it should be noted that when you have the correct item for someone it is not given to them automatically. Also, there are times where you may have an idea of where you need to go for the next portion, but it won't appear on your map until you speak with the right person about it... Amy, apparently, needs the directions. But it's never too hard to do a sweep-through of everyone if you're stuck somewhere. Also, not all exits to new areas are obvious and sometimes you'll have to scan the screen with your mouse waiting for a description to pop up. But after a bit of playing the system isn't hard to get down, and it will be rare to be stuck for too long unless it's one a very clever puzzle. Shardlight is unique with its puzzle solving and you'll have to think outside the box with some of the items you use though everything is logical. It's great as everything feels so fresh. Fetch quests never feel like fetch quests and any solution you find you can credit to yourself and in-game hints and not past experience with other point-and-click games. 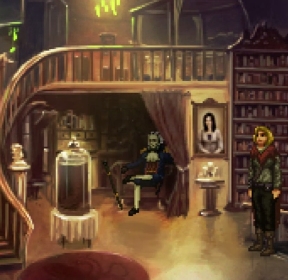 Shardlight deals with some heavy themes and has some really dark moments. The story itself is full of symbolism though there may be a point or too where it feels a bit preachy, but everything in the game feels very real. Death is all around and how the characters handle the events is very human. It's easy to be entranced in this world. It also helps that the voice acting is on point and the art is just vibrant and beautiful, even for a post-apocalyptic wasteland. While the game gives you three different endings and leaves the choice of which completely up to you, provided you have the right items for the right people, all of the endings, but one, are meant to leave you feeling a bit unsettled. It's clear the writer had one right ending in mind even though you may disagree. So while you have freedom to choose it's freedom to choose the "right" one. However, the right choice doesn't make you feel like you've lost something and it's easy to see why that was the truest ending. There is a great deal of beauty in this game and the story is what makes up a good part of it from start to finish.

No mention of Resonance? That is by far Wadjet Eye games best release to date.

You must be kidding. I even forgot I played that game, that's how mediocre it was.

If I'm kidding then I'm a terrible comedian. I'm sorry you couldn't find enjoyment in a game that someone else did. Not everything is meant to be enjoyed by everyone, we don't all get to have the same experience. Unfortunately that means some of us miss out on the incredible joy others find in an amazing title. Because of this I understand it's hard not to become envious of those who found the miracle themselves. I'm truly sad for you.

By the way, did you get stuck on any of the puzzles? I can help. If not, let's just be happy with the fact an amazing company has made another amazing game.

It really disgusts me that the only comments for this wonderful game are people arguing in the most petty way about a completely different game, so looks like I gotta come out of my shell and actually say something about *this* game.
So...griping about other people aside, this really is a wonderful game. The graphics are pretty much exactly as we've seen in other Wadjet Eye games, except that the portraits that appear when a character talks are much better imo, very realistic. That said, though the graphics quality is uniform to their other works, it is quite lovely.
I will say, I was surprised that there were multiple endings, but then on the other hand they did the same thing with Primordia - no real plot decisions up to the player till the climax, when one crucial decision can change the course of history, making or breaking the destinies of key NPCs and deciding the fate of the world. Exciting!

The biggest thing, though, for me, was that you're playing as a woman, and one who feels very real, whose abilities, whose strength and intelligence, whose loyalty, is never called into question without reason (there are people who have their reasons, natch - it couldn't be an adventure game without the character proving herself through quests, afterall); the game never relies on sexist tropes to outline the character's personality, and so far as I can recall, no character behaves in a sexist way towards her, though of course not everyone likes or trusts her. You might be surprised, but this is actually fairly rare in a main character who happens to be a woman, in games in general. So I appreciated that. It was nice to just relax and let myself sink into the character, without that awkwardness and alienation that invariably arises in the presence of misogynstic tropes.
And even more than that, there were also *other* women in the game! And they weren't thinly-veiled tropes either! (Well, alright, except for the rich, vain gossips, which I could've done without. On the other hand, all the rich people were overblown stereotypes, probly cuz they were The Bad Guys (TM) and also Symbols (TM) of economic inequality, so I guess the devs might've had their reasons to tropify *them*, at least.) And so but the rest of the women even had completely different personalities and backgrounds! Astounding! And one of the main NPCs is a black woman, who is a leader who stands up for her rights and the rights of others, which actually makes so much sense really. So I was happy with all of that. Color me pleasantly surprised.

I stayed up all night two nights in a row and slept during the day, I was so involved with it**. And I might even do it again soon! It was worth the money.

**Do not try this at home, kids. Insomnia is bad for your health, even if the game is really good and it's the weekend

@Hannah
Thank you oh so much for your comment!
I wanted to talk about how her gender effected the game (or really how it didn't!) but I only have so many paragraphs.

I loved that there was no 'Golden Bikini' moment and also that Amy could be both empathetic and still kick butt. It seems in most media women are either completely softies or cold-hearted BAs.
Amy had touches of both which made her feel like a very real character.

@RamblinRob
No judgment against Resonance. I tried to pick games that had the same writer, as Wadjet Eye (as far as I can tell) is a company that has a few different developers working for them. So I found the games that had the same man credited as the dev. I could be wrong though and that they all worked together. In which case I'm glad you brought it up so others who loved this work can go enjoy another great one (Have they actually made a game that wasn't good?).

Actually, Resonance was reviewed on this site in 2012.
Cheers!