It's been a long time since you've been home, but you were hoping to return under better circumstances than this. A phone-call from your distraught sister, Violet, tells you your father has died, and you're to return to Morton Castle to settle some family matters. What are the chances that will involve divvying up the old Christmas presents hidden in the attic or tracking down dear old Dad's famous Beer Can Chicken recipe? Well, considering Vogat Interactive's hidden-object adventure is called Shades of Death: Royal Blood, you can probably assume it's going to involve less feel-good family times and more ancient unspeakable family secrets. That's okay... that actually makes me feel better since that's how all my family get-togethers wind up anyway. 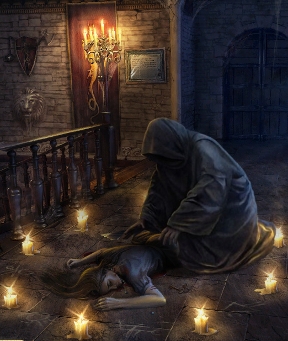 Gameplay is strictly standard point-and-click adventuring, solving hidden-object scenes and figuring out where to use the plethora of items you'll amass in your inventory. The game offers two difficulty modes, one with more help and one with less and longer hint/skip timers, but whatever you choose, you'll find yourself progressing easily as long as you remember to stay nosy. Investigate everywhere. Items, clues, and notes are tucked away in unlikely places, and naturally your family has invested in every sort of puzzle lock imagineable. I don't know, you guys, all I'm saying is that I don't have any sliding tile puzzles in my bathroom and I've never had any issues with malicious shadow creatures. I'm not saying the two things are necessarily related, but... don't they have, like, a spray for that?

Analysis: Shades of Death: Royal Blood really manages to feel like a mystery, and a wonderfully creepy one at that. A lot of work has gone into creating a lush atmosphere that straddles the line between fantasy and horror, and the end result is a satisfyingly macabre, though never particularly frightening (with the exception of a jump scare or two), adventure. Naturally, in your investigation into your family's disappearance and the ruined nature of the castle, you quickly discover that there's an ancient evil afoot, and if you don't want to become its next target, you'll have to track down a mystical amulet and delve into the spirit world for answers. 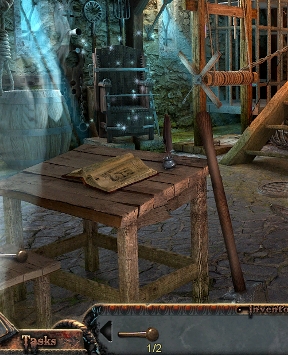 Perhaps ironically for a game primarily about sneaking around a dusty old castle chock full of nasties, the best way to describe the gameplay is clean. Everything about it is well designed and smooth to play in a way you don't often encounter. Hidden-object scenes are beautifully drawn with art that's appealing to look at but doesn't let style interfere with function which is a common mistake many other titles in the genre make. ("Oh, I'm sorry, did you want to play the game? We thought you wanted to stare at our exaggeratedly sketchy and heavily stylised chest of drawers for an hour.") You'll encounter a fair amount of puzzles as you go, but I'd be surprised if you told me you had to skip any of them; so much of what you'll have to deal with is simple trial-and-error to be solved in less than a minute or reassembling images in some form or another that players looking for a meaty challenge might be a little disappointed.

It's not particularly long, mind you; at somewhere between three to four hours for most average players, it's the sort of thing you sink an enjoyable evening into rather than something that'll suck your brain away for long stretches of time. It's a pulp paperback of a game, but that's not necessarily a bad thing, since it costs less than a movie ticket and will keep you entertained for at least as long as your typical flick would run. Shades of Death: Royal Blood is the perfect choice if you're looking for a solid evening's worth of entertainment, and maybe to save the world from unknowable shadow evils in the process.

can i ask something? why i can't pick up the hot key using tongs?? and i can't place the lever in iron maiden??
thanks :)