From Intenium, the makers of the equally awesome Insider Tales: The Stolen Venus 2 and Tulula: Legend of a Volcano, comes Sandra Fleming Chronicles: Crystal Skulls, a hidden object adventure with heavy emphasis on the latter. Sandra Fleming cuts out most of the casual stuff we see in modern games, leaving you alone with a strange world with nothing but your wits to get you out. It's a challenging and intriguing game that goes to greater lengths to satisfy your puzzle solving itch than most other games of its species! 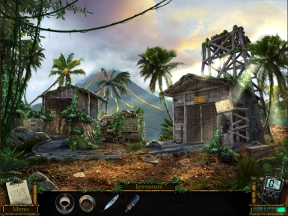 Summoned to the museum by a curator friend, you learn of the legend of the Crystal Skulls, relics of the old world hidden away by the natives of South America and sought after by conquistadors. The museum has one of the skulls, but now, information has surfaced leading to the remainder of them, sparking your pal Tom to head out on an adventure. You quickly follow, landing on the beach ready to scour the landscape for clues.

Sandra Fleming Chronicles: Crystal Skulls is much more adventure-oriented than most hidden object hybrids out these days, and for that reason alone, you should try it. You'll spend most of your time searching scenes for the odd item or two, poking your cursor around sparkling areas and investigating small mini-scenes within the larger areas. Often times you'll come up with a useful item or two, stashing it in your inventory for later use. Only when you collect the right things can you start solving puzzles, and even then you'll find you have to go exploring to pick out more necessary objects.

Puzzles take the form of multi-part riddles that require a number of items as well as some sleuthing on your part. For example, early on you'll be confronted with a locked safe with a three digit combination. Normally, a casual adventure game would throw the numbers on a piece of paper and place it right in front of your head. In Sandra Fleming Chronicles, however, you'll learn these numbers one at a time, but only if you're paying attention to your surroundings. They're never thrown right in your face, forcing you to actually get involved in the game! 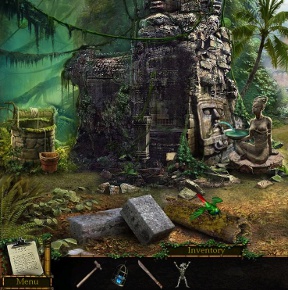 Analysis: Sandra Fleming Chronicles: Crystal Skulls isn't quite your ordinary hidden object adventure hybrid game. In fact, in a number of areas it goes out of its way to be just the opposite, preferring not to hold the player's hand and opting instead to throw you in head first to see if you can survive. Fortunately, even for non-adventure game buffs, it's easy enough to stay afloat, as the difficulty level won't drown you as long as you keep an eye peeled for random clues hidden right in front of your face!

Sandra Fleming Chronicles: Crystal Skulls has a lot of nice animations that are both fun to play with but also serve to liven up the hidden object scenes. Some of them add a bit of depth to a scene, like doors that open to conceal items hidden on shelves, or things you have to repeatedly click to swing them out of the way. Try clicking on everything, see what moves!

Sandra Fleming Chronicles dares to do what every other popular hidden object game does: provide a challenge, and draw the player in to the game's world. If the same old formula is what you're looking for, this game probably won't please you. If you want something different enough to be satisfying, Sandra Fleming Chronicles: Crystal Skulls should be the very next game on your "to buy" list!

I'm getting really weary of having to scroll past reviews - and even outright ads - of shovelware hidden object "games" (if you can call a set of still picture you look at then mindlessly click on a 'game') just to get to the actual JIG content every day. I do understand JIG has to pay the bills, though. Still, it's doubly frustrating when you're a horror fan and so many of these have some kind of tepid delusion of being 'dark'. "What's this? A new horror game! Well, let's take a closer look- oh darn it all."

[I'm sorry if these types of games don't appeal to you. You're of course free to your opinion and to call them shovelware if you want to, but there is a large audience of casual game players who are eating these games up. Even for me, since running this site for almost 10 years now, playing games can easily become a chore, especially the more hardcore games that are more difficult or that require a heavier time commitment to play. When I have free time to sit, relax and enjoy a game, hidden object games are increasingly filling that space because I don't have to think or work hard to play them. Also, people who don't necessarily consider themselves a "gamer" are playing these types of games in large numbers due to the interactive story elements and the casual gameplay they contain. If they weren't so popular, we wouldn't be featuring them in the quantity that we do. By the way, signed-in visitors see far fewer ads than do anonymous visitors. That may help with the scrolling that seems to be wearing you down. -Jay]

Fewer ads, eh? Well, sounds like a fair compromise to me. Anyway, no offense to the site or anyone on it; I'm just espousing my personal opinion (or "comment"). Obviously I don't expect everyone to share it. Sometimes people just want to air out their petty grievances. They get mildew-y if you don't now and then.