The following is a reader-submitted game review by Mongo:

With almost 10 years in the making, Sanctum from Nioga is a very unique game. The best way to describe it would be to say it's like combining chess with Magic the Gathering in a miniature game board setting. It could be one of those classic board games we played as a child, except this game is all digital and played only online.

Players get to choose one of the 12 Houses from which to deploy armies: War, Abomination, Hope, Death, Despair, Body, Justice, Life, Making, Mind, Nature or Unmaking. With each having its own unique style, the other half of the battle is choosing the individual spells you want to add to your customizable deck. There are over 500 cards in your arsenal to choose from, including spells that can do anything from creating monsters, towns and cities, to pumping up your minions, or causing destruction on a massive scale. 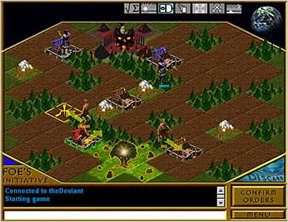 After downloading the game, it may take a little bit to get used to moving the pieces, casting spells and so forth. Once acquainted to the game, it feels a lot like two generals planning out and executing a war. Nonetheless, each game involves a good amount of strategy, a little bit of mind games, foresight and some good ol' medieval fun.

Now, granted this is a collectible card game, but that doesn't mean you have to spend much to play or to be competitive. The game can be downloaded and played without cost; however, with just $10 you can be permanently ranked and able to trade cards with others. There are no monthly fees or anything that makes you keep going into your pockets. And one of the best parts about the game is that the community is friendly, warm and often giving away free cards.

So if you have a little patience and are someone who enjoys good strategy games, then Sanctum may be right for you. It may not look all flashy or high tech, but Sanctum is a very enjoyable fantasy medieval game.

Update: The game is back(!), and players can now temporarily play with ALL the cards for free!

Seems like a decent game. I collect M:tG myself so I already have an idea about what strategies to use, but the boardgame-like outlay give it a unique twist. Hope they add more cards soon

I used to play this game way too much before it was transferred to nioga. The guys who made sanctum went on to make Star Chamber, which is kind of similar but set in a sci-fi universe.

this game causes massive internal haemhorrhaging in my computer.

Oh wow I just started with making a tile-based multiplayer flash game, but I hope it won't take me 10 years :P

I was considering to put trading cards in it too, but I'm not sure about much of the mechanics yet :)

everyone keeps looking for all those flashy games.. but finally a solid strategic game. with no CHEESE

I found this game a little while ago and LOVE it! Not sure why one guy said can't load, since it would run on a 486 PC. It doesn't require much. He should send an email to [email protected]! Anyway, Great Game! Check it out!

For the record, Sanctum contains 500+ cards and is expecting a 98 card expansion titled "Allies and Traitors" in the next few months.

Duckyeight is hosting a tournament right now, and I'm participating in it.

I'll tell you how far I get. Apparantly, being in a tournament and finishing a two out of three round is extremely impressive for a newbie.

For JIG, I suppose. Huzzah?

Well, I got to the prize round, technically, because I got past the first three rounds, but unfortunately got knocked out after that.

It's a great game, for sure.

It has worked out where its files have gone and is now playing quite a nice game.

A truly awesome game! I'd say someone should have clued us in years ago! I'm hooked already!

I cant seem to access the site anymore. It keeps timing out. Nob-body else I know has this problem. Can anyone help?

I can vouch for the game; I've been playing it for the last eight years, 10-30 games a day, and I've never played the same game twice. The replayability seems infinite.

Wow, this is an excellent game, man! I love them anubis guys! And the cyclops's are cool too. Takes some getting used to but I'll be buying cards fer sure!

Dear, I can't find nor Sanctum nor starchamber.
Does anyone have links please?

[The game is no longer available. I've updated the review and removed the tags. -Jay]