Samantha Swift is back, and once again she's traveling the world in search of mysterious items, hidden object/adventure style! Welcome to the third installment in the successful hybrid series, Samantha Swift: Mystery from Atlantis! 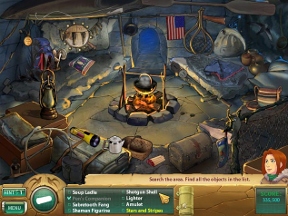 You begin in Alaska, searching for a native totem that is apparently more than it seems. As soon as you find the artifact it's taken by someone from the military, leaving you to wonder what's so special about that little thing. The answers will come as the game progresses, but the first thing Samantha and her trusty team discover at the Museum of Secrets Lost is that they need to find the pieces for a legendary item, the Harmonic Senses of Atlantis, to combat whatever threat the totem possesses. And it possesses a lot of threat...

Hidden in the totem is a meteorite, and inside the meteorite is a strange bacterium. The effects of the bacteria are two-fold: they make a person look much younger while simultaneously rotting them from the inside and making them susceptible to suggestion. An evil businessman (is there any other kind?) plans to exploit this to the fullest, creating the "Dorian Gray" skin creme (nice Oscar Wilde reference there) that will, naturally, be wildly popular in today's youth-obsessed culture. The plan is to get enough people hooked on the creme and then start the mind control via TV and the internet. Once they have enough of the bacteria, production can begin. Unless Samantha can stop them, of course.

Gameplay is familiar to anyone who's played a hidden object game before. You begin each scene with a list of objects that need to be found, some of which are for your expedition, some of which go in your toolkit for later, and some of which will end up in your museum. Yellow text denotes "clues" for that object, so you might see "monkey treats" and will need to figure out that it means "bananas". Once you exhaust the first list a second one will appear, this one loaded with objects that are completely hidden from sight and can only be found by using items in your toolkit or solving puzzles in the scene. 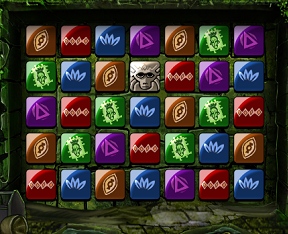 Of course, Samantha does have some help along the way. A limited hint system points items out, and Samantha's trusty scanner will show the outline of any object in your list. Also hanging around is your trusty PDA which carries information about each scene and enables Samantha to talk to her team back at the museum. Along with everything else there are two birds (swifts, of course) hidden in every scene. Find enough of the swifts to unlock a special bonus mode that allows you to revisit several of the hidden object scenes to compete against the clock to see how fast you can find random lists of items.

Analysis: How does Samantha Swift: Mystery from Atlantis stack up against its predecessors? Well, that's a tricky question, as the underlying structure of the gameplay has completely changed from the first and second games. Previous installments were more point-and-click adventures, wandering back and forth from scene to scene to complete an area. Mystery from Atlantis, on the other hand, has jettisoned the moving about and created a game that is much more of a classic hidden object with adventure elements. The emphasis is now on item finding, not adventuring. Is that a bad thing? Not necessarily.

In order to bolster the hidden object elements, timed and untimed gameplay modes have both been added, the former obviously providing more challenge than the relaxed timerless experience. Finding items is, naturally, more difficult as well, evidenced by the tricky yellow hints present in your list. Putting the blue "really well-hidden" items at the end of the scene was a nice touch, allowing you to fill your inventory with tools before you start the real hunt.

If you're after gorgeous hidden object gameplay with a slight adventure flavor, Samantha Swift: Mystery from Atlantis is sure to scratch that itch. Fans of the series will probably feel a pinch of sadness to see the adventure flavor so diluted in the third installment, but regardless of the shift, a superb casual game sits right below the surface.

Samantha Swift and the Mystery of Atlantis - Walkthrough

Bought it. It's a good game. They've fixed the access violation bugs from v.1. In addition to the lightning bolt hint system they've added a 'swift bird' tally to give you access to an added feature. I recommend it. The Swift games (3 so far) have never left me disappointed.

By the way, when is that next Serpent game gonna come out?

Samantha Swift and the Mystery of Atlantis - Walkthrough

There seems to be a problem with one of the puzzles near the end of the game.
The 'Monkey / Sense of Touch' puzzle shows the sequence to follow, but only for a couple of minutes, then it's gone forever. No amount of clicking or exiting & reentering the game makes a difference. Without the sequence there can be no solving of the puzzle & one is just stuck there.
I finally went to the BFG forum & it appears quite a few people have encountered exactly the same problem.
I have emailed BFG, along with I'm sure, many others.
Sure hope I don't have to start my game at the beginning...I won't be a very happy camper! :o

Great game but I had the monkey puzzle problem mentioned above- but only after I couldnt understand the directions, exited the game, checked a walkthrough to understand what i was supposed to do then restarted the game. The sequence was gone. Unable to finish.

I started a new player name to play it over just to see the ending, and got to the colored ball puzzle and then got the access violation error! The first time, that error didnt happen.

I read the access violation was fixed, but doubt the place I got the game has the new version. I gave up, the only part I was missing was the ending cut scene. Other than those technical glitches, I thoroughly enjoyed all the Samantha Swift games, and play-wise they are standard I judge other games by.

The silhouette turns yellow when your cursor is close to an item and orange when the cursor is on it. This is the same for the Golden Touch and Atlantis.