Imagine you are sitting in your living room, bored and with nothing but your iOS device to keep you your loneliness at bay. As you listlessly swipe through the app store, you stumble upon Sage Solitare, by Zach Gage, and think, "Why not? I'm already alone." Soon you'll be engrossed in a nice twist on solitaire games and be glad there's no one around you have to share it with. The object of the game is to clear the board of all cards while getting the highest score possible. But this is no ordinary solitaire game! Instead of one row of cards, there are three rows of three piles each. The number of cards in each pile decreases from top to bottom. Unlike traditional solitaire and a lot like poker, you have to make hands from these cards to clear the board. Hands are very similar to what you find in poker, with pairs, straights, and flushes, though not exactly the same. Hand types and their point values are listed when you tap the hand type button at the top of the screen. But of course there's a catch! You have to use cards from at least two of the three rows or the hand is invalid. That nice row of lucky sevens you were dealt isn't so lucky after all. When you can't make any more hands, it's game over. 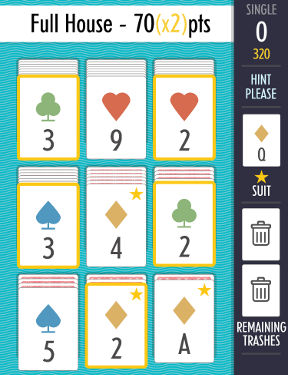 You do have two trash cards you can use whenever you want to clear something off the board. This is helpful for when there are no more hands on the board, or if you are feeling lucky and want to try for that straight flush. Trash cards are replenished when you submit a hand. If you can't see any moves, but want to make sure you're not missing anything before trashing, just tap the hint button. Some strategy comes in when you realize that while you do get points for clearing a pile, you might not want to if you have the choice. If you eliminate the entire bottom row (which isn't too hard, since the bottom row has the fewest cards) it makes it much more difficult to make a hand, since you have to use cards from two rows for it to be valid. Each game also randomly chooses one suit to be the bonus suit. Any hands including a card from the bonus suit gives you double the amount of points, so it might be more points to make a usually lower points hand with a bonus card, then a higher point hand without one. While you can play the basic game for free as often as you like, you get more options if you buy the full version. This unlocks two more game modes and tracks your stats, as well as cosmetic changes to the background and card back patterns. Instead of playing with one deck of cards, you can play with two, and there is a way to play where you can also make a hand out of any cards that add up to 15. Sage Solitaire is one of those "just one more game" type of apps, where before you know it 45 minutes have gone by. It's the perfect game to relax with, whether you're alone or not.