Here's one for Dear Abby. When your boyfriend gets distracted from preparing to propose to you by summoning a succubus from a magical book you left lying around, who are you more mad at... him or yourself? Our heroine Tiffany has no time to point fingers if she wants to save her boyfriend Mark from a fiery fate in Alawar's hidden-object adventure Sacra Terra: Kiss of Death. Turns out that "book of love potions" she picked up from the flea market because she was sick of Mark dragging his feet in their relationship wasn't such a gag after all, and now she has to contend with a succubus, the well-known slinky homewrecker of the abyss, who went and carried Mark away. Tiffany's only option is to head to Sacra Terra Island, the place the book was written, but the old monastery there may only add to her problems. Let this be a lesson to you, kids. Don't speak Latin in front of books. 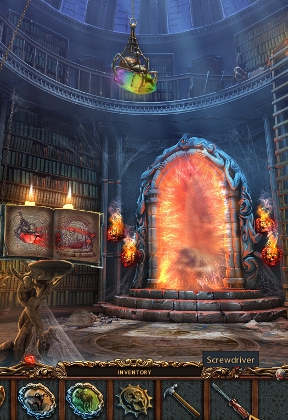 Turns out the succubus isn't all that interested in setting Mark free. She claims he's been dreaming of a woman like her (bad makeup, cheap corset), and believes that's proof enough that love is a lie and lust is the only truth. And, y'know, since she's not just any succubus but Lilith herself, chances are you won't be able to deal with her by dragging her onto a talk show and throwing a chair about her while screaming about "not being woman enough for your man". Fortunately, you don't have to give up and go home to make a new dating profile just yet, since it seems like this old island still has some secrets left in it. You'll soon find yourself able to use a mysterious portal to travel beyond the island to places and people also suffering from Lilith's dark designs and fueling her power. Search around to uncover clues and mystical artifacts used to complete rituals, solving puzzles and hidden-object scenes in order to proceed. You'll also get an incredibly helpful map, which not only uses colour-coding to show areas that have available actions in them, but can let you hop around to any place you've already visited at a click. You would think that would be something Lilith would have specifically made sure you wouldn't have, but hey, far be it from me to tell a man-eating nether witch how to do her job. 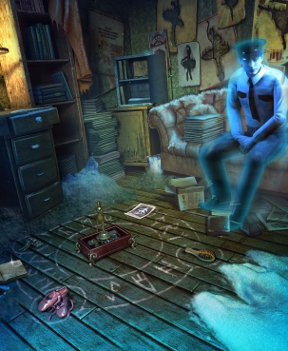 Analysis: Kiss of Death is one of those rare hidden-object adventures with style to spare, fueled by a cinematic story and top-notch voice acting that brings the experience to life. If you don't like having to constantly track down the mystical doo-dad du jour the endless barrage of obstacles overcome by magic rituals might be a bit much, but if fantasy's your thing prepare to be dazzled. It's an absolute stunner of a title with imaginative environments and beautiful visuals, and combined with its rich atmosphere makes it difficult to tear yourself away from once things get started. It's a surprisingly long game, carrying you through with high-quality cinematics in a way that never lets you get bored. I'll say this for Lilith... for an unrepentant demon-spawn of darkness who just wants to suck your soul dry, she sure knows how to show a girl a good time.

If there is a criticism, it's that the puzzles you'll encounter tend to be lovely but fairly dull, of the "swap these things" or "match those things" variety with little actual brain power required. You'll also need to do a lot of backtracking, though your handy-dandy magic map pretty much takes all the sting out of that. It's unfortunate that it's hard to really care at all about Tiffany as a protagonist, since she rarely speaks or even appears and is thus overshadowed by both Lilith herself and the other people you'll be helping. Despite those quibbles, however, and a little hokiness in the plot, Sacra Terra: Kiss of Death is a hidden-object adventure that's exceptional in virtually every single way by a developer who never disappoints. It's beautiful, polished to a mirror sheen, and filled with excitement and drama. Fire up the demo and see if Lilith is a girl you'd like to make a date with... even if you probably shouldn't take her home to mother.