Stranded in a dusty, limbo-like town, a freaky sheriff marching around, a little girl running around the streets, and mysterious messages telling you to stay in your hotel room. This sure is a strange part of Resurrection, New Mexico, especially when you consider the bricked-up wall with Native American symbols preventing your escape! Time to explore a bit and find a way out. This puzzle-filled hidden object adventure game from Media Art, creator of Love Story: The Beach Cottage, has a vibe that sits somewhere between an old western tale and an episode of the X-Files. Only, you know, with more ballerinas and serpent/dragon tails slithering about! 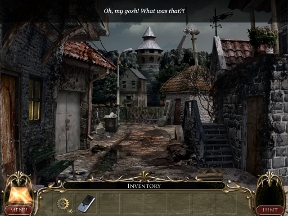 It really bites when you miss your daughter's dance recital. What's even worse is the car accident you get into on the way there. What's even worse than that is the strange hotel room you wake up in and doors that board themselves up when you walk near! As journalist Amy Walters, you're not about to sit on your hands while your daughter needs you, so you break free and start your search, sifting through clues and talking to the unusual inhabitants of this strange town.

As hybrid games of this nature go, Resurrection, New Mexico falls right in the middle of the casual adventure/hidden object category. You'll travel through the more "abandoned" side of Resurrection, talking to people and gathering items you happen to see laying around. You have a bit of freedom to roam where you please, but puzzles that require certain items to complete block your progress, so there's a definite order to things. Hidden object scenes serve up small lists of items to find, and when you're done, you'll get something new to hold onto. Your inventory is where most puzzles take place, so keep an eye on it and try using items whenever you get stuck. 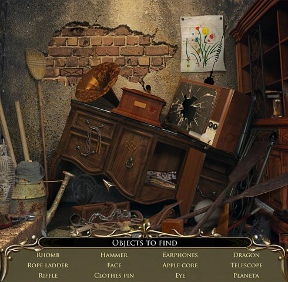 Analysis: Resurrection, New Mexico walks the tested line of hidden object/casual adventure hybrid games without leaning to either side. It's exactly in the middle of the road, offering few deviations from the formula, which could be a good thing or a bad thing depending on your tastes. The puzzles are largely inventory-based and thankfully trend towards the logical, though anyone who tries fixing pliers with tape will learn a quick lesson in durability!

Resurrection, New Mexico requires a lot of searching, clicking, and, well, guesswork. If the generous hint button wasn't there, you might often lose your way because of a randomly missed fold on a piece of paper or an unusual spot on the wall. Sparkles gently guide your eye to certain places, but there's always something else to find by moving the cursor around and clicking when it changes to a hand. Trial and error are often effective as a brute force tactic, so whether or not you notice the little details usually doesn't matter!

One peculiar omission from Resurrection is voice acting. While most casual adventure games seem inclined to include it, developer Media Art decided text was enough, leaving you to read the game's sparse dialogue on your own. While some players prefer a little aural flavoring, others would rather have silence instead of half-baked actors stiffly reading lines. We're going to call the lack of voiced characters a good thing!

Great game (bought the collector's edition). Were it possible to slow the text down, I would agree regarding the lack of voice-acting; I'm certain I missed half of the dialogue because it advanced before I'd got halfway through the line. Not everyone can read at the same speed! (Indeed, in coding my own Flash movies, I often found it helped to read the text aloud like an actor, clearly enunciating everything, otherwise I'd get complaints that my speech bubbles vanished too fast...)

Good mix of hidden object and adventure - and an interesting backstory in the collector's edition. Some of the plot points seemed a little odd (the key to the padlock in the evidence room is WHERE?! (note: CE backstory only)), but that's a minor gripe in an otherwise great game.

Jim Gamma -
If you play in window mode, you can grab the top window bar with your cursor to stop it so you can read what it says.