When tornadoes strike Greefield Island, who you gonna call? The rescue team, of course! Clad in the finest orange overalls and wearing the highest-tech helmets available, the handy crew sails in, hammers at the ready, willing and able to clean up the debris covering the island and repair each and every building along the way. A time management sim in the vein of My Kingdom for the Princess II and Roads of Rome II, Alawar Game's Rescue Team aims to take its own slice of the road repairing, house rebuilding pie, one level at a time! 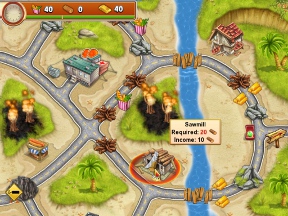 Rescue Team is all about telling workers what to do, and there's plenty for your small crew to accomplish on each level. Each map is filled with a nest of roadways that are blocked by piles of wood, debris, or broken roadways/bridges. In order to get to the houses, sawmills and cafes that need repairs, you must clear the streets so you can pass. However, you can just send workers out to do their thing whenever you please. Each task costs a certain amount of gold, wood, and food to accomplish. Managing these three simple resources is where the game's challenge comes from, and you can't rely on random resource drops to fuel your mighty team of rescue workers!

Each level in Rescue Team has a set of goals you must meet in order to pass. Usually this is something simple like "collect three gems", "rescue two survivors", or "build three houses and earn lots and lots of gold". Pretty basic stuff, and nothing that will make you put on your challenge-defeating socks to accomplish. Getting the gold in each level will take some practice, though, so don't expect to master the game in one sitting!

Between levels you get to spend your points on fixing up a house that's in dire need of repair. Broken windows, shattered doorways, busted car exteriors — you name it, this house has suffered it. You can't always fix a chunk of the property with each visit, as some of these repairs are prohibitively expensive. But after a while, you'll have everything patched up and like new, which is a satisfying sight to see! 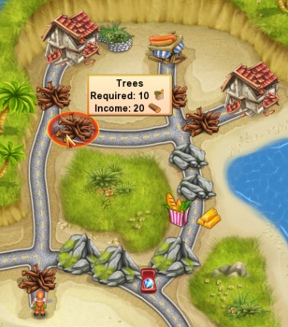 Analysis: Rescue Team is a fine example of walking the well-laid expectations of an established genre. The game is careful to stay in the middle of the road, never taking any chances with gameplay tweaks, never attempting to push anything extraneous on to the player. Instead, Alawar chose to give us exactly what we expected: time management, simulation, and resource management with a smattering of quick-clicking. It's enjoyable, and it's never frustrating, which is sometimes exactly what you want from a casual game!

There's no tutorial in Rescue Team, but the game starts slowly enough for you to get the picture. There are three areas to play through with 60 levels in all. Plenty for several solid hours of fun, much more if you're determined to get the gold in each stage. The good part is you can't really "fail" in Rescue Team, only get a lower score, making this very accessible to first timers and the younger members of the casual gaming collective!

Unfortunately, Rescue Team lacks the depth or fine-tuned gameplay its genre buddies possess, leaving it feeling a bit flat about midway through. If you're new to this sort of game, it's actually not a bad introduction to the repairing/building time management genre, but the missing depth and gameplay variety hurts the experience if you're already a fan of games like this.

Despite its relative simplicity, Rescue Team swings in with a fine time management/simulation offering. It's straightforward and fun, two things that meet the minimum requirements for a casual game, without anything weird or wacky to bog down the rest of the experience!

First, this is available for the Mac.

I'm generally a fan of these games and My Kingdom for the Princess is one of my all time favorites. I've seen some complaints about that game being a bit too hard for some people or kids, so this is a good alternative. I got gold on every level with only a couple having to replay and make much effort. For me, that was a disappointment.

Also, the way they tote up and list the score, you never seen a total for what you got on any one level, so there's minimal replay value -- you can't really try to best your own score since you don't know what it is.

If you're steadily getting gold, you'll rebuild the player's house (similar to the castle in MKFTP) long before the end of the game. In most games I've played you need gold on every level to do this. So you're midway through the game and don't have a lot more to accomplish other than really similar levels.

The game play doesn't vary much through the levels, new elements aren't added on later "islands" and the difficulty doesn't increase much.

Graphics are okay, but on a bunch of levels the arrow for the path points *into* the game not out.

Overall, it's not bad and game mechanics work fine. I'd give it a B, maybe a B-.