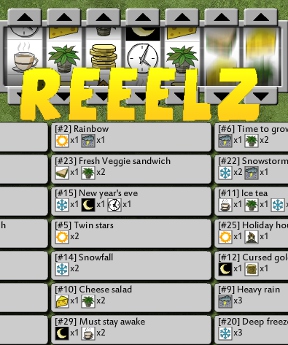 C'mooooooon cheese! Mama needs a fondue party! C'moooooon... aww. A potted plant. Well, I'll just click this up arrow here, and bingo, another combo card is filled in Reeelz, an addictive blend of skill-based puzzle and luck-based slot machine from Game In a Bottle. No more mindlessly feeding coins into the one-armed bandit; if you prioritize and have a long term plan, you'll certainly come out on top. Take that, Las Vegas!

The controls may seem complicated when written, but they'll quickly become second nature when you're actually playing. Your overall goal is to complete all the combo cards with the most possible tokens left over. The cards list combinations, like

"Lunar Outpost (one moon and three houses)", "Long Hedge (four plants in a row)" and "Strict Vegan (no cheese)". The cards that you can complete with your current spin will be at the top and highlighted yellow. You can click on a highlighted card to fill it and cause the slots to spin again-- but not so fast.

Here's where the strategy comes in. You only have so many tokens (15 at the beginning), and each spin costs one token. You can lock reeelz that you don't want to spin by clicking on them, making them yellow (this doesn't cost anything). You can also spend one token to "step" a slot up or down one position by clicking on the up or down arrows. In my introduction example, I needed a cheese, but when I clicked to spin, I got a plant instead. The cheese is above the plant, so I clicked on the up arrow to move up to the cheese and complete my card. For completing an ordinary card, you get one token back. If the card is a little bit harder, it will have a star on it and earn you two tokens. The hardest cards have two stars and earn three tokens. 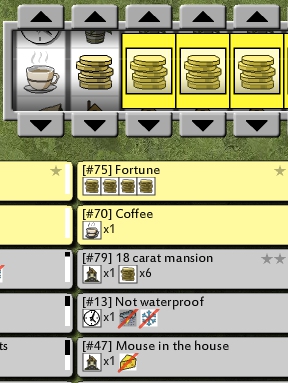 Token management is critical. If you run out of tokens, you lose the game, but you also have a limit to how many tokens you can have at once. You start out with 15 tokens and a limit of 20. If you have 20 tokens or more and complete another card, the tokens are wasted. Every ten cards, your limit increases and you receive a token bonus.

Once you clear every card, you've won, and you'll be told what your rank was. In the later games, you'll need to finish well over the token limit to get the highest rank.

Analysis: Game in a Bottle is probably best known for their tower defense series Gemcraft, so Reeelz may seem like something of a departure for them. The two may have more in common than you'd think. Both games are about looking forward and planning for the end game at the beginning. Both games require prioritizing. However, whereas Gemcraft is a time sink of the first caliber, the toughest level of Reeelz will take only 40 minutes or so to clear its 150 cards. In fact, in my opinion the game is most fun in its 60 and 90 card incarnations, because it becomes more of a coffee break challenge.

The game is a lot less luck-based than first appearance would indicate. Sure, the spinning is pure luck, but it's really a matter of judging based on the initial random spin which of the starred combos you can obtain quickly by locking, stepping and spinning. So you get all the casino excitement of chance without the frustration of losing due to factors outside your control. You can always win. So give it a spin. C'mon, c'mon, sandwich!

I like this. It's easy to pick up and get into, but there's more strategy involved than you'd think at first glance.

The different levels let you adjust your playing time based on how much free time you have. Plus the combo names are pretty clever and funny too.

There goes my morning.

The game is incredibly fun, but man... got to the 90-card level and lost with one combo to go. I needed a loan button :(.

It was odd, but nice, that if you had extra tokens you didn't immediately lose them. I can't help but feel that it's still largely luck-based, even with all of the strategy: I scraped by the beginner and intermediate levels with few extra tokens, but on the hard deck I ended with almost 70 extra. Pure luck.

Maybe I just started with the right strategy going in, but I didn't really find this a challenge at all.

Because there are so many combos to build, it really does take the luck out of the game. A fresh, random spin is going to to be lucky for some combos and unlucky for others, but because you get to choose which ones to go for, you can always pick the combination that gives you a big head start. Eventually, the luck will even itself out for all of the combos in the game.

Advice: On a fresh spin, first check to see if you have any high (3 or 4+ depending on difficulty) combos already. Then look at the top few "almost-there" combos for the highest combos there. Often, you'll only need to spend one or two tokens to get the last parts of the combo in place by stepping. Also keep your eye on the 2-star combos... when you can get a good head start (at least 3 showing or 5 with steps), forget about everything else and go for those. I'd say try to finish one of those about every 10 combos.

What tripped me up the most was I forgot that the game gave you a bunch of bonus tokens every so often, so I ended up going over. But, that gave me an excuse to start working on one of the big combos.

Same, I found it too easy too. I actually played through most of it without holding any of the slots because I forgot the option was there :P The only strategy was the mantra: don't be frugal!

This game is nice :)
I was spending ages just struggling on the 2nd deck until I realised you could step, then I finished with 32 tokens remaining =D

I enjoyed it, but like many I found it very easy. In the last game I ended it with more than 10 tokens over the max because I managed to get a majority of the starred items before I reached 100 combos - I found myself pretty much using the same strategies as listed above, and after the last game I kind of gave it up. I will say, a decent test of luck combined with skill is seeing how many tokens you can end the first game with. I was so close to getting a total of thirty, but I failed completely to get the "Only Calories" item, which I find rather challenging a lot. I find it interesting that the first game provides a more interesting maximizing challenge than the last ones.

remember its a loop

"Midnight" seems broken am I missing something?

Just checking, but in the easy level (I just started) none of the combinations have stars on them. Are they all considered equally easy? Is that what makes it "easy"?

Starred cards give you bonus tokens when you clear them. They are definitely more difficult though.

in order to get the credit.

A bit boring, and yet challenging enough to waste an hour...

Has anyone noticed that Midnight Ritual somehow involves CHEESE?