Do you think you're safe from the denizens of the night just because you turned the light on? Does the warmth of the sun scare away evil just because it's bright and cheery? Think again. As Redemption Cemetery: Children's Plight aims to prove, you're never safe from the demons of this world (or any other world). A follow-up to the first point-and-click hidden object/adventure hybrid from ERS Game Studios, Redemption Cemetery: Curse of the Raven, this installment forces you to ask the difficult question: how the heck am I going to fall asleep tonight after witnessing that? 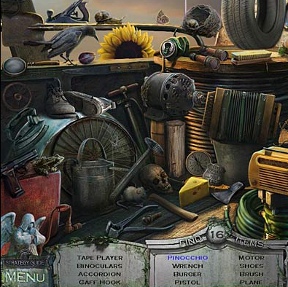 Your day starts off with a major bummer: a powerful warlock has recently escaped from his ancient tomb, and he decides the first thing he's going to do is mess with you. You survive the encounter thanks to a helpful crow (a.k.a. a friendly wizard guy), but you were cursed and are now trapped in a cemetery. The only way to get out is to find the warlock and defeat him.

Pointing and clicking are all you'll need to do in this game, so ignore your keyboard and snuggle close to that mouse of yours. The cursor (a skeleton's hand, yikes) changes when you can interact with objects or take a closer look at certain areas, so a few quick swipes across the screen and you'll get a good idea of what you should do next. Puzzles, even though they might be staring you in the face, usually can't be solved until you find certain items, usually by grabbing them in a hidden object scene or finding them laying around the adventure portions of the game.

As for the hidden object scenes, expect a mix of riddle-style items as well as straight-up laundry list searching. Some things you'll have to create or assemble before ticking them off of your list. For example, to find a jack-o-lantern, you'll need to locate a knife, then use it on the pumpkin to carve a nice face into the front. Only then can you collect the item and call it a day! 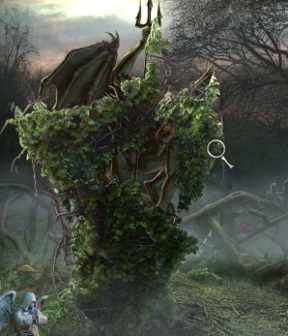 Analysis: Did you pick up Redemption Cemetery: Curse of the Raven? Then you know exactly what to expect from this spook-fest of a sequel! A solid four to five hours of gameplay round out the experience, complete with a number of challenging chapters, mini-games, puzzles, and the like. The visuals are superb, the music is quite fitting, and the atmosphere of doom and gloom is excellent, exactly the kind of thing you expect from ERS Game Studio.

Detracting from Redemption Cemetery: Children's Plight's almost pristine exterior is the sad fact that it's structured almost exactly like every other ERS hidden object adventure release. While that list includes some fantastic titles (Grim Facade: Mystery of Venice, PuppetShow: Lost Town, and Haunted Halls: Green Hills Sanitarium, just to name a few), sometimes it's nice to have something different to satisfy that casual hidden object yearning we often have. The spooky/eerie dark and dreary casual adventure game has been done, and while Redemption Cemetery does it extraordinarily well, it doesn't exactly reinvent the casual wheel, so to speak.

Chapter 2 - Through the Well

Chapter 2 - Through the Well

Trying to enter the toy store. It will not work for me. I have completed all tasks needed, but I haven't been able to go left to enter the store.

Do you mean you can't get to the area at all? You should be able to travel there, regardless of what tasks you haven't yet completed.

While standing at the Square, the directional arrow to travel to the Toy Store should be on the left side of the Town Hall building, as if you were going around the back.