QuantZ from Gamerizon is a match-3 (or, rather, match-4) physics game with puzzle elements. There's no story to be had, although the font apparently used for decoration on borders and in the background looks pretty similar to the one used for elves in Lord of the Rings, so maybe I'm missing out on a lot of epic exposition because I'm juuuuuust not quite that nerdy yet. More likely it's just gibberish or insults, but gosh it's pretty, isn't it? You'll find that "pretty" is QuantZ's middle name. 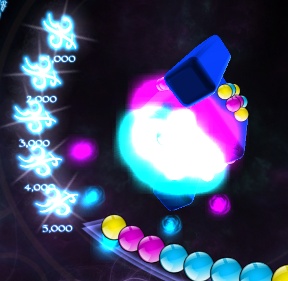 The object of the game is to clear all the orbs clinging to the surface of the object floating in the middle of your screen. (Swing your mouse around to rotate it.) You do this by firing coloured orbs at matching clusters, which will cause groups of four or more to burst. Use the mouse to aim, and click to fire; a guiding beam of coloured light will show you where your shot will land, although bear in mind that the physics at work behind the game makes stacking tricky. If you happen to catch a differently coloured orb beneath the group you've eliminated, it will explode and turn into a fireball that you can direct at matching colours to destroy them. Use it to burn off orbs, or to ignite other chain reactions to keep the combo going; crackles of electricity will show you other places that can launch a fireball if you land your current projectile in the right spot. Going too fast for you? Click and hold the left mouse button to freeze time to help you aim your shots precisely.

As you progress through the stages, each made up of multiple "waves", the playing field becomes more and more complex. While you initially will almost always have more than enough orbs and time to complete a given level, later stages will force you to think more strategically to work with limited materials. You'll also see more colours added to the palette, and different types of orbs that need to be dealt with, such as frozen orbs that can't be moved by rotating the playfield. 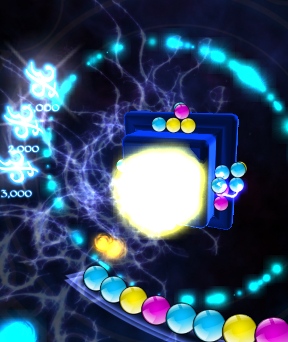 Analysis: QuantZ is lovely, and it knows it. Nearly every action you take is heralded by an angelic choir or proceeded by enough pulsing blue glows to put any Winamp visualisation to shame. The problem is that it really, really wants you to know how pretty it is, and as such gameplay doesn't feel as quick as it could when the game slows everything down to play some otherworldly music and flash some mystical icons whenever you make a combo. During all this, you can't fire another orb, and the clock continues to tick down. It's only a few seconds, but it can get frustrating. I've never lost a level because of it, but the relatively slow pace it forces on the gameplay means it isn't quite as forget-to-eat hypnotically engrossing as, say, Bejeweled.

The different modes available provide a good variety of playstyle depending on your mood. Puzzle can be a challenge, but sometimes the challenge is less in the way the pieces are layed out and more in trying to fiddle everything into the right place by flipping the cube around until you have everything where it needs to be. Aiming your fireballs can also get tricky the more complex the shapes get, as glows given off by potentially explosive clusters can obscure your targeting light.

Exceptionally flashy and easy to play, QuantZ is a good choice if you want something that you can pick up easily with whatever time you have available. The presentation is top notch, and the difficulty curve is smooth and gentle. There are a lot of stages to play through, and you can replay the ones you've already won if you want to better your high score, or just need another dose of that sweet, sweet glowy blue light. Some players may find it a bit too easy or slow (which is why I would recommend the demo), but with a top-notch presentation and fluid gameplay, QuantZ is easily one of the better titles of its genre on the market.

Just a note, the title says Windows only, but a Mac version IS available.
(You even linked to it)

[Thanks for pointing that out, the tag was misspelled. It should be fixed now. -Jay]