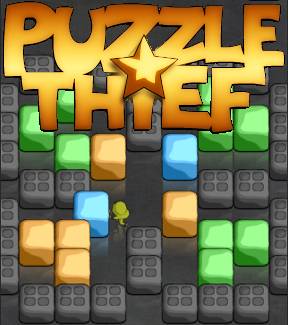 Digital Seed's newest title, Puzzle Thief, is, well, a puzzle game about a (you guessed it) thief who steals his loot by solving block pushing puzzles. Why these colored blocks are so enticing isn't explained, but your only concern here is to get all the blocks to disappear so you can proceed to the next heist. Click and drag a block to get the thief to push it in the direction you indicate. Your thief isn't an acrobat; if he can't walk around to the opposite side in order to push the block where you want it, you can't move it. A block disappears when one of the same color is placed adjacent to it, but as you progress, you will also be given the power to zap a block with lightning by double-clicking it, which makes it disappear on the spot. This is a great way to get rid of a loner or cornered block, though using it can also prevent you from earning three stars on a level... which would be a crime for any puzzle perfectionist!

The difficulty progression in Puzzle Thief is well done, never carelessly throwing you into an ultimately hard level. Challenge is given to you in little bite-sized chunks before you're handed a full king size bar of deviousness. It can at times become tedious to have to tell the thief to move a block one square at a time, waiting for him to do so, but at least the graphics give you some eye candy while you wait. On the surface they may seem simplistic, but once you take a closer look, you'll see great little details like the mirrored floor or the idle breathing movements of the thief. This game offers a fulfilling experience at 25 levels, with more available if you purchase the iOS or Android mobile version, but as it stands, Puzzle Thief is a simple but fun way to start your morning off with a bit of challenging thievery.

I think there was a block-pushing game a while ago that looked and played a lot like this one, only it was keyboard-controlled and the viewpoint was semi-isometric instead of parallel.

I bet you're thinking of Cubrius, one of Digital Seed's previous titles.

Yes! That was it.

Pretty well done game, but I think I would prefer keyboard controls, as the mechanics are a little awkward with a laptop touchpad. It seems like it would lend itself perfectly to the traditional u-d-l-r controls.

Yes, keyboard controls would be better, unless you were playing this on some kind of tablet PC I guess.

There also needs to be a quick explanation as to which shapes etc are acceptable, so I don't feel like an idiot at level 2...

So it's basically Cubis... except the controls suck.

I noticed this game is available as an android app. That might explain the controls.

It's a variation of the evergreen Sokoban, but with a slow animation between each turn, and no clear reason as to why I have to undo a combination to re-do it and only then it scores.. meh..

3 stars on all but the last level, where I can't do better than two ...