Pony Island, by Daniel Mullins Games, is an indie puzzle game that's hiding a dark and terrible secret... or, well. Not hiding, really, since the game's official description gives it away, but DARK AND TERRIBLE NONETHELESS. What seems like an innocent and cheerful yet broken game about ponies takes a turn for the macabre... though you'll need to figure out how to fix the game first. Of course, once you've started, you can't stop, because the Capital-D Devil is literally in the machine and wants to keep you trapped in it forever. To escape, you'll need to literally break the game by discovering ways to crack the options and otherwise bend the code to your will. Originally conceived as a Ludum Dare game, whose original version is still available in your browser to try, Pony Island is strange, but we like it that way. 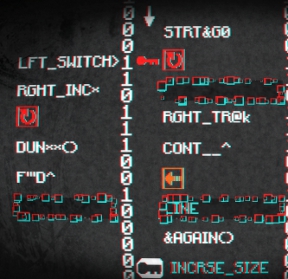 Pony Island is mostly played with a mouse (the game does not recommend a trackpad), though occasionally you'll be prompted to type things in. It's presented as if you're playing on an old computer, and from the very beginning, you'll need to treat it differently from your usual game since hitting "start" won't do much. Describing the gameplay is... difficult without directly spoiling it. Much of the game revolves around your process being stymied by that darn ol' devil, and figuring out how to get around it by rooting through any options or files you can, and experimenting to see what works. Rather than merely ticking boxes to proceed, you may have to uncover hidden abilities, move text around to suit you, figure out or find passwords, or reroute a command. You're never given any direction or instructions, so you'll need to think outside the box in order to proceed. You will, however, occasionally need to take part in some fast-paced action sequences, so make sure your hooves are up to snuff.

While there have been other games that have dealt with similar concepts (that is, the idea of a "possessed" game), Pony Island grabs this concept and sprints with it, managing to pull off nearly every aspect of it quite well, apart from a tendency to be so melodramatic as to be too corny to be scary. The atmosphere is ominous, with an old-school tilt to every aspect of the visuals, but it telegraphs everything so obviously in regards to its story and characters that you'll see any twists coming a mile away. Fortunately, Pony Island's puzzle-based aspects are a lot more engaging, and a big part of the game's charm. While in most cases you'll be left to figure out how to proceed on your own, fiddling around with everything from the core mechanics of the challenge you're working on, from programming puzzles to turn-based and more, or just prying away at the game's UI to find what secrets you can, is extremely rewarding. Make no bones about it, Pony Island is weird, but it's a clever sort of weirdness puzzle fans will want to embrace, with a lot of surprises to be found for players who are keen enough to whittle their way through the layers. It's over the top in some pretty great ways, with a lot of experimentation and tricks to its gameplay, making it an easy recommendation for anyone who likes their puzzles games to make them think in all dimensions outside the box.

This review piqued my interest at once and I was determined to check this out later, but I somehow completely forgot about this again. (wtf, brain? -_-)

Then, recently, I watched this in a twitch livestream by one of my favourite let's-players (you probably know him, if you're German ^^) and I was constantly alternating between surprise, laughing and simply wtf-ing, sometimes all at once… (°_°)

So, even I had already seen the whole playthrough, I had to buy it on Steam afterwards (for a few bucks and my soul, it's quite a bargain, really). Because the game commanded me to. And now, I'm too afraid to not recommend it. Did I mention, it's very well programmed as well? *nervous twitch*

Honestly, if you like weird, macabre, but not too scary games and, of course,

, you should definitely check this one out ;)