One of the more unique tower defense titles that's been released this year, Plant This! is a highly-stylized, maze-based strategy game. Instead of featuring a pre-defined path for "creeps" to follow like we see in most tower defense games, it employs the "open field" design, in which you create the path by using your towers to corral the creeps down the map as inefficiently—or slowly—as possible. Plant This! features a pretty slick graphics engine and contemporary interface, even by download-game standards. The music and sound effects really complement the lighthearted "garden" theme, helping to make it accessible to most kids as well as adults. 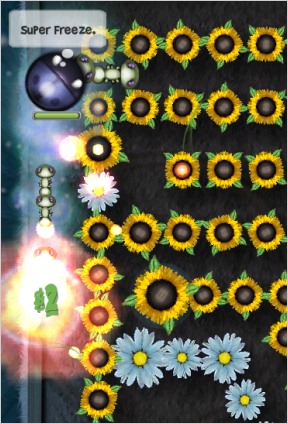 That's not to say it's a kiddie game, though. Despite the floral-themed tower array and cutesy cadre of insect creeps, even the most hardened tower defense vets will find a challenge here, especially past the "easy" setting. That said, the storyline is a bit ridiculous, placing you in the role of "Gopher," some sort of laboratory-designed super-rodent who used to play chess with his lab professor before being tasked with defending gardens from an onslaught of invading bugs. Okay, maybe it's more than a bit ridiculous. But that doesn't detract from the cool gameplay, which is what really makes this game noteworthy. Even though I'm crazy about tower defense games, I was never really attracted to the "open field" subset of the genre, found in titles like Desktop Tower Defense. I can't easily articulate why; I suppose I just found it counter-intuitive to waste resources on towers (rather than cheap walls or blocks) to create a forced path for creeps to follow.

But Plant This! just makes it work (mostly by using a combination of gameplay mechanics that usually aren't implemented—all together—in the same game). For one thing, you receive the full amount of money back when you sell a flower-tower, making it easier to correct mistakes. Also, the basic flower (a sunflower) is super-cheap at only five bucks apiece. This makes it easy to use them as building blocks to form your maze, while only spending more cash upgrading specific ones as you see fit. There are a nice variety of flowers as well, and you won't have to wait until the end of the game to unlock them all. A new one automatically gets unlocked every few stages. You'll find your typical "slowing" towers, area-of-effect towers and rapid-fire towers, as well as a few that are unique to this game's mechanics, like the tulip (which can be used to fill smaller gaps in your maze) and flowers that counter specific abilities of creeps, like jumping.

The overall objective is pretty standard fare: bugs will enter the field from the top of the screen in waves, trying to reach the bottom. Every bug that successfully reaches the bottom of the field will subtract one "life" from you until you reach zero, at which point you lose. The tutorial stage does a pretty good job of prepping you, although it's still a bit unclear as to how the bugs' "pathing" works. Through trial-and-error you can begin to predict how they'll react to things like dead-ends, or whether or not they'll turn right or left when presented with the choice. Still, a little more clarification would have been helpful. Trying to design the "perfect maze" quickly becomes an addictive factor in the gameplay. The longer the bugs are exposed, the easier it becomes to destroy them. You'll find yourself trying to design long "fake-out" corridors in the maze, causing them to turn around and retrace their steps. The key is making their journey from one end of the field to the other as inefficient for them as possible, and placing the right combination of towers throughout the field (as well as keeping them upgraded). 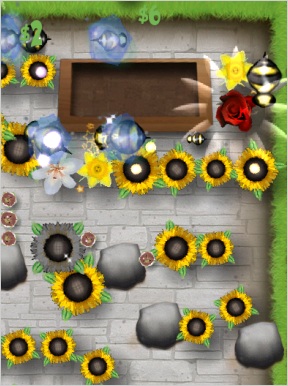 Flowers are upgraded in ranks, up to a maximum of five. The cost of upgrading each flower is relative to its base cost, so expensive towers will cost a lot more to upgrade. Like many tower defense games, it's usually better to upgrade a smaller number of towers to max rank than to upgrade a lot of towers to mid-rank. In addition to planting flowers, there are several other ways to defend your garden. Every once in awhile, a "special" bug will come out mixed in a wave of creeps. You can click on these bugs to have all nearby flowers target it, which will focus their attacks on it. Once it's destroyed, it will do a number of things depending on what color it is, like giving you an extra life, or freezing all nearby bugs in place. You also have a "Squish" ability that's a little less useful than it sounds. By planting a flower on a bug, it will damage it or trap it (I found this to be inconsistent sometimes, probably a "bug"—ha ha—in the gameplay). Use at your own discretion, although you can always sell the flower to get your money back.

Analysis: There's enough content and well-designed gameplay in Plant This! to keep it fun and interesting through multiple sessions, whether it's for 15 minutes or a couple of hours. Fifty levels spanning over three difficulty modes is a respectable amount of content, and there are lots of staged events throughout, like alterations of the field (sometimes a pain in the neck) and even "toy" bosses and mini-bosses. Thankfully, your carefully-designed mazes persist through 10 levels, so you don't have to start from scratch too annoyingly often. The game does have its downfalls though, most of which are preference-based. There's no "relaxed" mode, which is something players have complained about. The wave timer is always ticking down, sometimes making it tough to re-design and tweak your maze before more bugs are on the way. As mentioned, creep pathing isn't always obvious, and the "invisible grid" of flower placement versus that pathing isn't well-defined. Sometimes you won't be able to predict whether or not a creep will be able to get through unless you actually let one try.

Achievement-junkies will appreciate the various "trophies" that can be earned in-game, as well as the emphasis that's placed on scoring. There are some cute little distractions like your "flower book" and "bug jar," both of which can be referenced to review what you've encountered and unlocked. Aside from the few setbacks it faces, Plant This! proves to be a well-polished and stylish game that will attract many players who usually don't enjoy tower defense games. Most fans of the genre will love it, and fans of the "open-field" or "maze" tower defense subsets will go absolutely bonkers for it.