I know what you need. You need a haircut. How can you expect to solve a crime with unruly locks like those? Johanna's fiance Mark has failed to return from his time at sea, made more mysterious by the claims people have made of seeing him on the streets of London until a short time ago. What begins as a quest to reunite two lovers ends up revealing a much more gruesome secret in Penny Dreadfuls Sweeney Todd, a hidden-object/point-and-click adventure with big production values and a grim story based on the original short story. Come to think of it, you look a bit peckish too. Fancy a slice of pie? 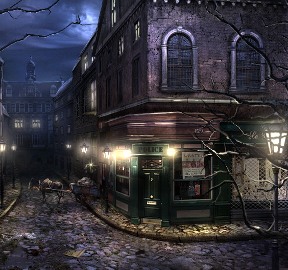 With the help ("help") of Fowler, one of London's finest, you'll need to scour London from edge to edge. Or at least, the seedier bits anyway. Navigation is left to the mouse, clicking on sparkles to investigate items or trigger hidden-object hunts. Once you gain the map, you can move through London by clicking on the map icon and choosing your location. Throughout each chapter, you're given a list of evidence to find, and once you've got it all, you'll have to literally piece together a puzzle to give you a clue as to what happened. And speaking of puzzles, you'll have your share of those, as well. The genre's old stand-by, "move this blocks to slide these pieces over here", makes an appearance, but the rest are a mostly clever mish-mash of various puzzle types that keeps the game from feeling stale.

Happily, Sweeney Todd's outstanding visuals lend themselves to some very well done hidden-object scenes. They're immensely detailed and can be challenging without being obnoxiously crowded. More than once I found myself reaching for the recharging hint button. It's a bit disappointing to see that they apparently couldn't find enough items from each scene's location to make the pictures look more natural, instead of stuffing, say, a laundress' work space with peas, lollipops, and other toys.

But while the HOG and puzzle scenes are by and large very well done, the standard adventuring on the streets of London falls to the same spotty logic that occasionally trips up other point-and-click games. Examples include making keys from the ground, triggering a bear trap, and cleaning a cash register with a solution you probably won't immediately think of unless you're a seventeenth century housewife. It's especially frustrating since at the time you'll have several items that could serve the purpose just as well. It's annoying because after the third time it happens, it starts feeling less like a misguided idea the developer had, and more like a cheap way to pad the gameplay. 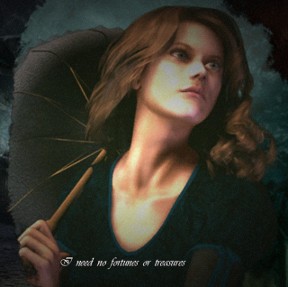 Analysis: Based (loosely) upon the original penny dreadful story that started the legend, although much more pared down, this Sweeney Todd is less a tragic figure exacting his own brand of justice, and more a greedy fellow you wouldn't want to meet in a dark alley. At least, not without something protecting your sweet, luscious throat. The story unfolds in story-book style cutscenes between chapters, and while I might have wished they were integrated a bit more into the actual gameplay, I was typically enjoying myself too much to care. Sweeney Todd possesses one of the most all-around lavish presentations in a HOG to date. The environments are beautiful, the character models (mostly) well done, and it's extremely entertaining despite a somewhat anti-climactic ending.

The only sticking point, in fact, may be the singing. Sort of singing. What might be called singing. It's hardly the actors' fault, since most of them have perfectly serviceable voices. The trouble lies in the fact that they're not singing songs at all; just ordinary conversation. They pick up and drop tunes in the same sentence, and nobody really sounds like they're working from the same script. I actually enjoyed it, but depending on your approach to it, it's either hilariously over the top, or incredibly annoying. Imagine I came up to you and asked you where I could find the post office. Now imagine I did it by warbling each word into what could charitably be called an off-key tune. Not only would it be frustrating, but think of the inconvenient jail time after you started thrashing me when I refused to stop.

Penny Dreadfuls Sweeney Todd is a remarkably polished title and marks the start of a very high quality series to watch out for. You can expect to sink several hours into the game, if not longer. It isn't a perfect title, but it does definitely earn its place amidst the cream of the crop. Give the demo a chance to woo you over. And hey; it's also the only game out there that can give you the closest shave in town.

A Collector's Edition is also available. It contains an in-game walkthrough that can be handy for some of the game's more odd-ball puzzles, and the ability to instantly replay any hidden-object scene or puzzle from the Extras menu, along the soundtrack and more. Remember that Big Fish Game Club Members pay only $13.99 for Collector's Editions (or 2 club credits), and collector's editions count 3 card punches of 6 total needed for a free game.

Watch Lane: On the Street

Lime Wharf - Above the steps

Junk Street - on the street

Walkthrough written by Kayleigh of JIG

I definitely plan on picking up the regular version in a few weeks. I thought the demo was alright but I'm not much of a fan of...that style of music. Yeah, it's annoying when you've found or seen like 3 or more keys in previous HO scenes, but then all of a sudden need an inventory key to proceed.

Reviews are getting far too long lately... I know that commercial games are now a big part of the site, but I still think one can review a hidden object game with far less words.

Watch Lane: On the Street

Lime Wharf - Above the steps

Junk Street - on the street

Walkthrough written by Kayleigh of JIG

I'm surprised this has received so few comments. I thought it was terrific.

Great atmosphere, top-notch graphics, and really wonderful sound. (Except that singing!) The hidden object scenes were probably the best I've seen outside a Mystery Case Files game, hitting that sweet spot between clever and impossible. I did have to use the hints a couple of times, but it was mostly for things I didn't have a good mental image of -- I could barely tell you what a modern fishing bobber looks like, let alone one from a couple of centuries ago. There were a couple of illogical puzzles but none seemed that bad to me. (I was fine with the cash register puzzle, but the wasp's nest drove me crazy. Why did I have to use that particular object when I had half a dozen in my inventory that would've done just as well?)

Terrible anti-climax of an ending, though.

Thanks for the review!

I also hope there are others playing this, well worth the $6.99 I thought and I'm not a huge fan of hidden object games.

I second georgina's comments above about the atmosphere (creepy and kind-of gross, but not too much), graphics, and sound.

The singing? I actually appreciated that they tried that, kind-of an interesting convergence with the musical roots of this story (Sweeney Todd, the Demon Barber of Fleet Street). It could have been annoying if it was all the time but it was only cut scenes between levels, and one could skip them if they wanted. It wasn't Broadway or anything but it was different.

Like I said the hidden object stuff is not my cup of tea, but actually got into it here and thought the graphics and atmosphere helped me enjoy it more than usual. The random comments by the officer narrator were funny and weren't overdone (but just on the edge though).

The puzzles were well conceived for the most part, but will second that they ranged from easy to hard but still logical to hard and not so logical.

I thought it was worth the time and money, and I thought I was doing much worse than my final "grade" reflected so that was rewarding! Probably will even play it again to see how much I can improve.

# There is a hint telling, that the first one has to be clicked last and for sure the solution has some to do with the plate with engraved numbers on the top, but I don't know what exactly. I can give the solution, but not the reason, why it is right :(

Reason: The numbers in the metal plate are assigned to each doorknocker, from left to right (5-1-3-4-2). With those numbers assigned to each knocker, you pull the knockers in numerical order (i.e., 1-2-3-4-5).