There's this one, annoying, nitpicky thing about evil villains: they keep coming back. Last spring, you thought you stopped the nasty Shade for good, rescuing the innocent yet magically-gifted young Fiona to boot. Happily ever after isn't always forever in fairytales, and here it doesn't last longer than a day—as soon as you've escaped the danger at Fiona's house another turns up in the very place you thought she'd be safe. Now you must stop the Shade again by gathering magical artifacts from a pernicious pixie, baleful banshee and unforgiving nyx in Otherworld: Omens of Summer, a dark fantasy adventure hybrid from BoomZap. 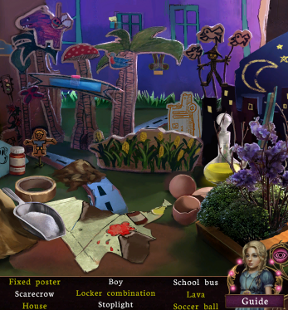 Arriving at Fiona's boarding school, you discover the Shade's nefarious friends are none to happy about his defeat. The place is seeping in a dreary, foreboding magic. Using "the sight," you're able to break the spell and so begins your quest. Fiona joins you on this leg of the journey, providing her magic as well as companionship to help in tasks and give assistance when you need a hint. How much additional help depends on which difficult level you selected and whether or not you have the collector edition's built-in strategy guide. Also at your disposal is a very useful smart map: check it for unfinished tasks and click on it to be transported wherever you need to go, eliminating the drudgery of backtracking.

After righting what's wrong at the school and activating the mirrors to new dimensions, you have three choices of where to go next: a campsite where true love was corrupted, an underwater city where bitterness hardened a father's heart against his daughter, or a deep forest where jealousy destroyed happiness. Each chapter presents a new subplot to engage in while bringing additional answers to your own scenario. Memory mirrors provide additional clues and your journal keeps track of your findings. Again, as in the first Otherworld, complete a side quest of finding fairies hidden in every scene and other achievements. 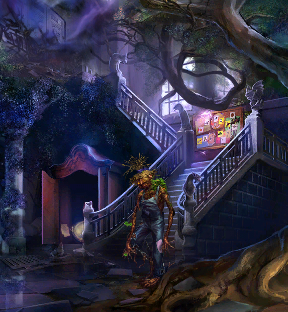 Analysis: BoomZap's follow-up to their popular Otherworld: Spring of Shadows is right in line with fans' expectations for gorgeous, color-saturated graphics, high quality production values, and creative content. Gameplay is evenly balanced between adventuring and minigames with a much lesser emphasis on hidden object scenes. Those few hidden object searches that do occur vary in their presentation: sometimes you're finding multiples of one type of object, others are the more standard interactive scenes, and there's also the occasional need to find fragments or replace a missing item.

The puzzles are not quite as engaging in comparison to the first installment of the series; although inventive takes on the familiar, they are inconsistent in difficulty. BoomZap makes search scenes that you really want more of; they're designed with such care and expertise, beautiful to behold and incredibly enjoyable especially compared to those in most other games. Likewise, Otherworld: Omens of Summer is staged with gorgeous graphics and mesmerizing atmosphere, creating an environment you want to get lost in. So the plethora of minigames sometimes distract from that immersion. As a plus, along with a beautifully-rendered epilogue that is, alone, worth the extra purchase, the collector's edition includes an option to replay all minigames, including the hidden object scenes, so you can skip now, dig in later.

Take note that Otherworld: Omens of Summer is not a light, sweet fairytale about princesses and unicorns as in the Awakening series. Rather, it's a fairytale aimed at a more grown-up audience; it has a theme and setting that's more foreboding, dreary and sometimes disturbing. Yet it is also never gory, bloody or spooky. Instead, Otherworld: Omens of Summer is a sumptuous, rich fantasy with a unique story to tell. It builds on the series and stands on its own merits, giving us something to look forward to in subsequent seasons.