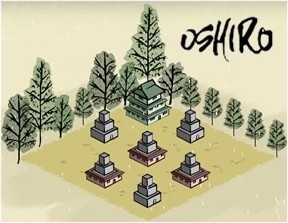 At first glance, it appears to be a Towers of Hanoi puzzle, and maybe that is why I did not play this game the first time it crossed my path. Not because I view Towers of Hanoi unworthy, for it's a classic puzzle game and one that is often used to teach recursive algorithms in programming. I passed on it because I thought it was unoriginal.

However, I continued to see people reference this game, the last time being at Alice's Wonderland games blog a few days ago. So, I finally decided to give it go.

Oshiro, which is Japanese for "castle", is played with similar rules as ToH, though the similarities end there. The game makes use of various sizes of blocks that form building stacks. You pick up and move entire stacks at once, distributing the blocks to adjacent pegs. You may pick up and move a stack if it has a block of your color on top, though you may not pick up a stack of only one block.

To move, you may only move a stack to an adjacent peg that isn't already full, onto which the bottom-most block gets dropped. You may not drop a larger block onto a smaller one. Continue by moving the remaining stack to another adjacent peg. This is repeated until all blocks have been distributed.

Puzzle mode is where anyone just learning the game should start. The demo features puzzles of increasing difficulty, with the early ones being very easy and the later ones rather difficult. It is presented as a tutorial with instructions and diagrams explaining the goals each step of the way.

Survival mode is a time-based game in which you must clear an increasing number of completed stacks by moving them using the rules stated above. As the interval timer hits zero, additional blocks are dropped onto the pegs of the play field.

Head-to-Head is a chess-like game played against the computer or a human opponent at the same computer. Each player begins the game with the same number of stacks, and then takes turns to gain control over the board. One point is awarded to each player for each stack with a block of their color on top. The game ends when a player cannot make any more moves. The winner is the player with the most points.

Oshiro Online this mode was not functioning in the demo version I played. However, I am willing to bet that in the full version this mode will allow you to play Head-to-Head matches against human opponents over the Internet.

The online demo version of the game is rich with features. Several different modes help to keep the gameplay fresh, while its appealing graphics and soothing soundtrack make this game an excellent choice for a casual game break. 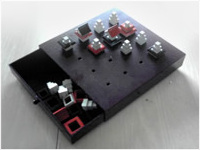 Oshiro is a new game idea from Walking Ideas, a San Francisco Bay area company composed of Shawn Chiao and Rick Hou. Together they create new game ideas and pitch them to toy companies around the world, while implementing online versions of them, too. Oshiro is the first of their ideas to come to fruition with the availability of this limited online demo version, with the full version to follow as well as a physical board game.

Thanks also to Nick for suggesting the game. =)

this game is hard O.o

Too bad we can't play against each other. =\

I love logic games like this, nice find! It's surprisingly relaxing too, I think it's the music.

I just finished the tutorial episode ^-^

Thanks, Sariko. I've updated the entry with that fact. =)

I've played this game before! It's fun, but very challenging. I'm glad you found this, because after I played it, I wasn't able to find it again. :)

This game is really fun! Thanks for recommending it!

Hmm...a change in the background. if i recall correctly i've seen this one before. one of my personal favorites. = )

anyway, this is a great game. i love the graphics too. so simplistic yet benefiting to the game.

Anything in episode 2 is impossible!!! GAH!!!

Hmm, I love this game! Really logical and relaxing. But I'm stuck at Episode 1, Stage 8.

Repeating what others said, brilliant find.

I finished Tale of all Tale, but how do I proceed to Cherry Blossom?