Oasis, by Mind Control Software, is a turn-based strategy game drawing inspiration from the likes of Civilization and Age of Empires. Instead of playing one campaign for weeks on end, Oasis condenses all of the same strategy goodness into short, three-minute levels. These small rounds play a larger role in the story arc. The steep learning curve has been removed to allow anyone to get hooked on a strong dose of gaming fun. 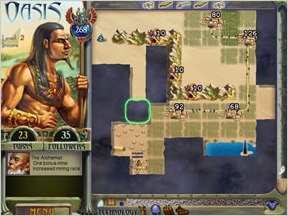 You play the future Scarab King whose father has been murdered. Egypt has fallen into chaos and an evil fog covers the land. Your job is to lift this fog, gather followers and rebuild your empire to defend against the barbarian hordes. Along the way you'll discover many remnants of the great civilization and be able to use them against your enemies.

The game takes place in a traditional overhead view and everything is handled by pointing and clicking with the mouse (with optional but rather pointless keyboard control). All civilization managing details have been simplified into a system of turns. Each level has 85 turns, at the end of which barbarians attack. During this time you must balance your strategy between defending the cities you find, uncovering land, gaining followers, and finding the hidden oasis where the magical obelisk resides.

Just like any strategy title, Oasis lets you gain technological advancements. You don't have to worry about adjusting stats or anything of the sort, simply have some followers start working in the mines. The technology bar at the bottom of the screen shows your progress. You can also find advisors, treasures and more goodies that will tempt your attention away from defending your empire. 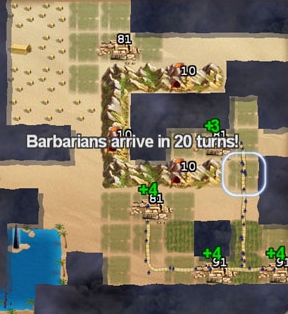 Analysis: Oasis successfully reproduces the strategy game formula without bogging itself down with lengthy or complex gameplay. It's a light and refreshing experience to have shorter levels, and yet the sense of strategy and discovery has not been diluted.

The overall story arc is a little weak, however, and after playing a few levels I felt like I was playing an arcade game rather than a strategy title. Oasis walks a fine line between the two, and sometimes I wasn't sure which it wanted to be. The identity crisis is a small one and the end result is a very polished and rewarding experience that anyone can jump right into. I've always been a fan of the Civilization series, but the time commitment became too great when life intercedes. Oasis is a good replacement.

Nice! Good find and Thanks for posting!

I ended up buying it a month-ish ago. It's a good strategy game (the levels get reeeeally hard) but it's over-priced for what it is. Still, I find myself going back to play every now and again....

For a basic strategy game, it's near-perfect. Just too pricey for what you get.

Great post, John! Make me almost wish I didn't have a Mac... Nah!

In a perfect game, you can niether add nor take away.

Oasis was imperfect. The core Minesweeper/Connect-The-Dots/Climactic Battle thing is fine. What got me was the Mining/Researching/Searching for Relics part. It had an impact on the core gameplay that was intangible at best and at worst, distracting. Needlessly complicated. I found an Engineer, my roads now take 2 servants instead of 5. Huzzah. Except that this changes nothing. Couldn't he just give me, say, 20 citizens and be done with it? It's all the same at the end of the level. The Reasearch bonuses has the same problem. If the citizens become more powerful as a result of reasearch, wouldn't make sense to give the player bonus citizens at the end of the level (based on the citizens he already has and exponentially increasing with every level reasearch) instead of having that meaningless arrow, helmet, spear progression? Keep the icons if you want, but at least give me a bonus I can see. +26 Reasearch Bonus!! What did those 35 citizens labor 10 turns for anyway? A different noise when they meet that Big Scarab in the sky?

boo for strategy games! but this actually wasnt that bad :)

Capt, it gets harder as the levels progress...and for Hard and Insane levels, every bit of help counts.

This is a pretty, Civ/AOE-style game - but veeeery basic. They obviously put the money on the eye-candy, not the AI.

It's pretty, it requires at least a modicum of thinking, and you don't go nuts over figuring it out. Like I said, for a BASIC strategy game, it's near-perfect.

Capt_Poco: Interesting ideas. The game certainly could have been simplified even further, but I think that might have damaged it more than helped it. It is already a massively watered-down strategy game, so removing research items and advisors would have placed it square in the arcade game category. I don't think it really makes it as an arcade game, but strangely enough it works as a strategy game.

As a fan of Civ4...this game is completely pointless. You often have to use battleship style clicking to find a city (many times the crops denote 2 cities.) It's also hard to even complete the objectives without luck, rarely can you find the obelisk, the towns, complete roads and mines, and find where the barbarians are coming from with the turns you have.

Dah, you could have warned that the trial was time limited.. I might not have bothered with the tutorial then >.>

I was just getting into it too, though I don't think I'll be buying a copy. The gameplay is kind of addictive, and it looks pretty, but I can give in to my minesweeper addiction far more cheaply - or a fair few free addictive games that have been reviewed here for that matter.

I haven't bought the whole game, Ive only played a demo of it, but I completed that well in the hour that you got it for. Did they give me a cut down version, becuase it didn't say any where the usual "BUY TODAY AND GET 200,000,000,000,000,000,000,000
MORE RICDICULESLY EASY AND BORING LEVELS", or are they just thick and are missing out on a stupidly obvious marketing ploy. Or am I just blind??

Or did I get an early version of the game?

Oliver: The part that you completed was probably just the tutorial. The full game has 9 replayable scenarios and 4 difficulty levels. Certainly more than an hour of gameplay.

This game wins the best top independent game in 2005!

It may interest Oasis fans to know that the levels in the game can be edited. There's instructions in the forums on Mind Control's site. You have to do some text-editing, like we had to do to make 'mods' for Civilization 2 back in the day, but they're fairly simple, easy to learn and not time-consuming at all... and being able to combine, for example, mountain cities and jungle in the same level, or put fifteen cities on a map with a river, etc., greatly increases replayability once you've played through all the standard levels on all the difficulty settings and even the random-level option seems repetitive. It isn't a game for everyone, but if you enjoy it as much as I do, it is worth the purchase price, especially if you're inclined to take advantage of the modding option.

anyone know where to download this game? it seems impossible to find it anywhere