Nikopol:
Secrets of the Immortals

Have you ever wished for something extraordinary to happen? For someone to step into your boring, everyday life and turn it on its head? Nikopol: Secrets of the Immortals, a large-file point-and-click adventure, may just make you think twice about that. Mixing stunning presentation with an off-beat story, it may not keep you wrapped up for days on end, but it offers a fascinating adventure into unfamiliar territory. 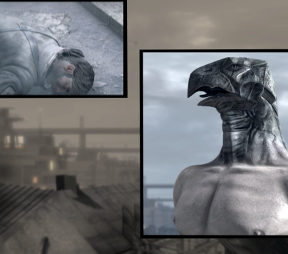 Like everyone else in this unpleasant future, Nikopol lives under the thumb of a dictator masquerading as a prophet, where everything from how a person acts to what they believe is controlled by the government. Struggling to get by as an artist, he joins a rebellious underground religious group, only to find that not all the villains in the world are so easy to spot. He soon finds himself pulled deeper into a dangerous adventure that dredges up secrets about his family he never could have imagined. As if he didn't have enough to worry about with trying to make his rent, or that monster coming up the stairs...

You spend the game looking through Nikopol's eyes, and you can look all around you freely with the mouse, nudging the cursor around the edges of your view to turn around or look up and down. Click on objects to interact, and hit the [esc] key to open your inventory, to let you use items you've picked up, or access the menu where you can save and load your game. Speaking of, you'll want to save your game frequently. In this point-and-click adventure, things can be a little more dangerous than you might expect.

But danger aside, put on your best southern belle outfit and get ready to be woo'ed. The visuals here are knock-outs, from the detailed environments to the comic book-style panel progression in cutscenes. You'll want to take full advantage of the free-moving camera in every new area to catch all the little touches. Everything is tied together by some fantastically atmospheric audio, from the ambient soundtrack to the It's a shame, then, that the subtitles feature such a rocky translation and are liberally sprinkled with typos; not enough to actually impede understanding, just enough to look sloppy. It wasn't "nocessary"? Really, game? Really? 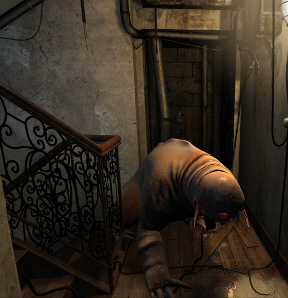 Analysis: Nikopol is based on a trilogy of graphic novels written by Enki Bilal, and it shows. Nothing says "based on a book" like tossing a player into an unfamiliar environment with little ceremony and acting like it's all second nature. Despite how grim it is, Nikopol's world is fascinating, and I wish we were given more time to explore it. Instead we're left grabbing glimpses of a much more expansive mythology through the windows as we're pulled along with him. As it is, the game is very good at hooking you in, and the gaps in your knowledge wind up being more intriguing than anything else. It's just too bad the game wasn't longer and more open, the better to allow you to soak it all in.

What is a potentially crippling blow for less patient players is the frequently overcomplicated approach to traditional point-and-click adventuring, several steps of each action usually being completely unnecessary. "Open movie projector, put in movie, pull down display screen, close projector, then flick the start switch"? Are you kidding? And while some of the puzzles are interesting, most of them wind up feeling like they're there just to pad game's length rather than add anything to the experience. When was the last time you had to play a little mini-game when you wanted to destroy a wall with a hammer while you were running for your life? A little more carrot and a little less stick would be nice, Nikopol.

Because, honestly, I could care less about where I'm supposed to use the tire iron or how to break into the corpsesicle chamber. Nikopol has a genuinely intriguing cast of characters that I wish popped up more often. Religious zealots, being who may be gods... or not. You know what? Not that soaking up the ambiance in these decrepit buildings isn't super awesome, because they're honestly very pretty... but I'd rather go talk to the bird guy some more. Or, hey! I hear there's a magic floating pyramid in the sky, let's check that out!... no?... *sigh* I never get to do nuthin'.

Despite some poor decisions and a potentially unsatisfying ending, Nikopol still manages to be a contender for your time and your imagination. It's not as long as other large file titles, but if you're looking for a cinematic experience in a new world, you'll find a lot to like here. Just don't expect everything to make sense all of the time. It's all part of the world's mystique... and, besides. If the weirdest thing that happens to you today is a guy with a bird's head showing up on your doorstep, you're doing pretty good.

Nikopol: Secrets of the Immortals Walkthrough

(Walkthrough written by Walzar of JIG)

The visuals look to be based off the movie Immortal http://www.imdb.com/title/tt0314063/ which, in turn, was based off the book. for fear of putting in any spoilers, the movie plot was definitely... interesting.

While I really like the begginings of this game, good atmosphere and very immersive,I see what the reviewer means by the feeling that puzzles are made overly complicated as padding. I've just been playing the demo, and it wasn't that long untill I came across something very frustrating

Once I'd got the easel all set up with the canvas to do the painting of his dad, I tried using the art kit (paintbrushes and paints) to paint it. He said that that would take too long and I needed to find a quicker way. This had me screaming at the computer "just to a quick sketch with your paints, ffs, you're supposed to be a bloody artist, it's not that difficult!", then traipsing round his appartment for ages trying and failing to find something else (not sure what though, maybe a biro?)

very interesting and strange, but i still liked it. will have to check out the game.

I bought this game soon after I heard about it, and there are significant problems with it:

1 & 2) The story is extremely incoherent. The game moves from location to location within 20 minutes, and the game fails to explain what exactly is going on (who is Horus, why are the gods interfering with human affairs, why should I care, etc), and with that, it is also extremely short. It's based on a graphic novel, but fails to translate the plot in any meaningful sense.

3) The voice actor for the main character is grating, and he really doesn't understand what's going on. His "advice" makes him sound completely incompetent.

Nikopol sounds awesome on paper, but it really isn't worth $20.

LOL the beginning of the story sounds like what's happening in Israel right now with the Palestinians.. game sounds interesting..definitely gonna try this, thanks for the recommendation!
xoxox

Movie is actually based on a comic book.
Also, some of the paintings from screenshots are Enki Bilal's work. I still haven't tried the game, though.

Nikopol: Secrets of the Immortals Walkthrough

(Walkthrough written by Walzar of JIG)

I was confused for a moment by mentions of a demo, but the 'demo' link takes you to the 'Game Daily' site, while the other links above take you to the 'Big Fish' site. The good news however, is that Big Fish only charge $6.99 for the game, as opposed to $19.99!

I haven't played it yet, but having seen half of the movie on TV last night, I believe I'll be buying both!

Enki Bilal is an amazing artist and a solid and complex writer. Although it uses his artwork, I don't think the game is any bit comparable. Buy his graphic novels, you'll have much more fun. The Nikopol trilogy and The Hunting Party are my favorites.

I have downloaded the demo and cannot pick up the incence and lighter, curser remains unresponsive. How frustrating!

L - You may have to re-install the demo. It seems like you've found the lighter and incense and if the cursor doesn't change over those objects, it may be a glitch. Give it another try. I found it to be a really fun, challenging and visually stunning game - worth trying again.