Ask any child of the 1980s and we'll tell you; fantasy isn't always happy. We learned that from Sarah, and even from Fantasia. Four years after a freak car accident that killed her husband and left her daughter Emily without a father, Kathleen knows better than anyone that life isn't always a fairytale. But what she doesn't know is that doesn't mean there isn't any magic left in her life. Nightmare Realm is a stunning and engrossing hidden-object dark fantasy adventure from Lesta Games and Films that's full of surprises and blows almost all competition out of the water. 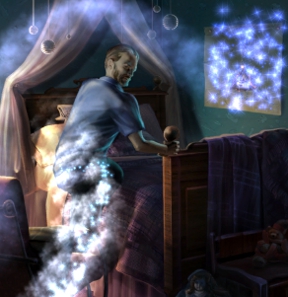 A moment before midnight the day before Emily's seventh birthday, something strange and terrifying happens. Kathleen is woken by Emily's visiting uncle Peter, who brings her downstairs just in time to witness Emily's abduction. The police aren't going to be much help with this one, however, since "big black cloud of noxious evil with eyes made of glowing hate" generally doesn't translate well to a suspect sketch. Kathleen has no choice but to pursue, and she and Peter unknowingly step into a massive conspiracy from another realm that endangers all the bright young minds of the future. What is the "bridge of seven"? Who are the "Extractors", and what do they want with Emily?

Gameplay is simple and done simply by clicking with the mouse. In casual difficulty, objects you can interact with will sparkle or cause the cursor to change as you mouse over them. Make sure you investigate everything; there are clues everywhere, and Kathleen's journal will keep track of objects or places of note that could come in handy. Most puzzles don't come with instructions, but if you're stuck, the hint button will tell you what you should be doing. It will also provide you with a nudge in the right direction if you're at a loss as to what to do or where to go during normal gameplay. Just make sure to keep your eyes peeled for origami figurines; collect all 33, and you'll unlock something special. 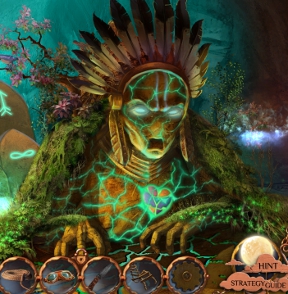 Analysis: Nightmare Realm is a fairly unusual hidden-object adventure in that it places such a large emphasis on story, and also in that the story itself is actually really good. While it starts out somewhat predictable (seen one adorable moppet kidnapped by supernatural forces, seen 'em all), Nightmare Realm has more than enough twists and turns to keep feeling fresh and original, and players who dismiss it based on the first fifteen minutes of play are going to be sorely missing out. The world design here is also top notch, creating a realm that feels strange and otherworldly without relying on typical fantasy tropes to do so. Nightmare Realm really felt like it could have been a top-notch dark fantasy film in the form of Labyrinth (only without David Bowie's painted on pants), but as a game it still delivers better than most other casual titles out there.

If there's a downside to the story, however, it's that it's a little anticlimactic, has a few plot holes, and leaves you wanting a lot more. If you buy the Collector's Edition you'll gain access to a bonus chapter that provides some more story and an entirely new set of areas to explore, clocking in at over an hour of extra playtime. The standard gameplay will probably take most players around four hours to complete, which may seem a little light to some for a Collector's Edition purchase price, but the quality of the whole package is simply outstanding and I personally would happily pay for it again. Some of the animations applied to otherwise static figures look odd, but the artwork and area designs are gorgeous and made the whole thing a joy to experience. 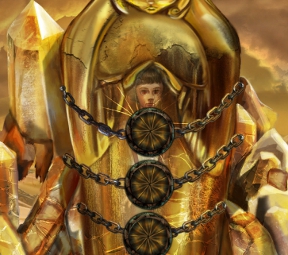 Nightmare Realm is no slouch where the gameplay is concerned either. Hidden-object scenes are full of fantastic detail and mini-puzzles, object solutions are logical but inventive, and the environments you explore are packed with great detail and while the puzzles are mostly variations on types you've seen before, they're still presented in a creative fashion. The only real downside is that the game does force you to do a fair amount of back-tracking from time to time, and there are only a handful of hidden-object scenes that repeat throughout the course of the game.

In a nutshell, Nightmare Realm is everything I want every game in the genre to be; creative, captivating, beautiful, creepy, and fun. I played it all in one sitting although I only meant to try the demo, and wished it have been even longer when I was done with it. It's sorely in need of a sequel to flesh out the backstory to the premise, but even taken on its own, Nightmare Realm is a fantastic adventure that comes highly recommended. Try the demo and then keep your eyes on the developer for future releases. Nightmare Realm is just plain good, period.

Use the Goblet with Water from your inventory on the glowing lantern.

Definitely try the demo first to see if it works on your PC. BFG has addressed some issues and released a newer version. Still doesn't work on my Win 7 Home Premium PC.

Demo doesn't work for me at all, tried un-installing and re-installing same problem, only have a quarter of the picture. Very disappointing as Big Fish games are usually fine on my computer Windows Vista...

Use the Goblet with Water from your inventory on the glowing lantern.

Hi, I am up to chapter 5 in the extractor realm, I have cut 3 ropes but the game freezes as soon as i go to cut the 4th rope. could someone help please? thanks