Nightfall Mysteries:
Curse of the Opera

Ah, the opera. The drama! The romance! The... cadavers? As the lowly stagehand of a popular opera group, you weren't expecting anything out of the ordinary when you're all summoned to a tiny, remote town to perform. At least, until the performers start coming down with an unfortunate case of dead. Is it a simple case of a madman on the loose in the sleepy little town? Or is there something much more sinister lurking behind the scenes? Nightfall Mysteries: Curse of the Opera is a refreshingly challenging hidden-object title where finding out whodunnit isn't as cut-and-dry as you might think.

If you can point and click a mouse (or a touchpad) you can play Curse of the Opera. Click on people or objects of interest to interact with them, and keep your eyes peeled for sparkling areas that mean you need to take a closer look. As you progress, you'll start picking up items you'll need to use to progress through the story. Make sure you refer to your journal often whenever you find yourself stuck. You could find clues lurking in the pages that can make a seemingly impossible puzzle merely challenging. 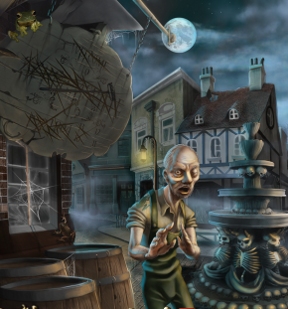 The difficulty of finding items scattered throughout the hidden object scenes ranges from simple, to cunning, to "OH COME ON". Fortunately, you have a very forgiving hint button; it takes maybe thirty seconds to recharge, and you can use it as much as you like. The puzzles are made up of a wide variety of mechanics, ranging from logic to math to an elaborate Rube Goldberg contraption. Clues to solving them are scattered throughout the large map, and you'll have to pay attention to all the details. The "skip" button takes a long time compared to your hints to become available, and trust me when I say you'll be sorely tempted to make use of it at least once. Not that I ever did. Stop looking at me like that.

Analysis: While it's currently seated in position three of one of my top five hidden object games of all time, my first impression of Curse of the Opera was that it was only mediocre. Aside from some top-notch visual presentation, the game didn't do much to endear itself to me in the first half hour or so of gameplay, mainly because it spends so much time early on explicitly telling you what to do and leading you around by the nose to make sure it gets done. It does nothing whatsoever to hint at the absolutely head-crushing puzzles that are waiting around the corner to pants you in front of your friends and steal your lunch money. See, Curse of the Opera actually has a difficulty curve; puzzles and hidden objects become bigger and more complex the farther on you go. While this makes for a challenging experience, it unfortunately means that it gives the false impression that the game is painfully easy, and I can hardly blame people who dismiss it for that mistake in design without giving it a chance to shine. 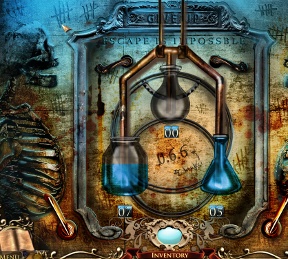 The game's other sticking point is its storytelling. The writing isn't bad. Most of the time. ("A gloom of darkness"? Really?) The story that unfolds here is actually fairly complex, and it's enlivened by a pleasantly dark sense of humour and even a shocking moment or two. The opera troupe you're stuck with is made up of big personalities and bigger egos, and everyone seems to have a motive. It's just unfortunate that the exposition is mostly left to a long cutscene at the end of the game, and that the game does so much backtracking to familiar locations. Sure, they're all gorgeous and strange, but after a certain point it starts to feel like busywork.

Nightfall Mysteries: Curse of the Opera has all the ingredients for an absolutely stellar hidden-object game despite its initial awkwardness, and while it falls shy of true superstardom, it's still a high-quality title. Your mileage may vary, but I spent somewhere between four and five hours on this one, mainly because I'm a big, bad, awesome game reviewer and I refused to skip any of the puzzles. (At least, as far as you know.) While it make take a while to really grab hold of you, Curse of the Opera is a fine, if flawed, example of the genre, and I expect even greater things in the future from the development team behind it.

Anyone else having the problem of this game requiring an update to flash player, and then not recognizing that the update has been installed?

An OK game. The good stuff - I liked the story and the puzzles were good - the final puzzle was excellent amounts of fun.

The bad stuff - the hidden object parts were not the best. The objects were hidden in the "pile-o-junk" style and not incorporated into the scene background. Also, they frequently would ask you to find "bird" and you would have to figure out which one of the 5 different birds on the screen was the right one. Some of the objects were the smallest number of pixels I have ever seen in a game like this. Finally, in one puzzle the object was mislabelled, which made it impossible to find except by using the hint.

Christina: I totally have that problem. I have no idea how to fix it.

You should contact Big Fish customer support about the Flash issue. I'm sure someone there will be able to help you.

@ LazyBum: I totally agree. I hate it when a HOG game asks you to find something in the scene that is obviously there, but not what "they" were looking for. @Jay, I agree again, BFG customer service is excellent.

How do you get out of the dungeon?

challer - dungeon
I'm not sure, where exactly you are. You talk about the dungeon in chapter 7 - Closing the Curtains?

And if so, does it already help you to know:

Please let me know, if you need help with the mini game :)

To get out of the dungeon u need 2 go right 2 the back of the room just behind the chair, the curser will change 2 the wide one then press touchpad on laptop or enter on computer.[u will come out of the drain in the street]

shepherd's crook from the cliff's edge

and I've found the

but when I use the two together, nothing happens! Is this a glitch or am I missing something? Hmmm...

I am having the same problem. Any help??

forgive me my english
but i have a probleem in chapter 6 with the key that i must take with the shepherd's crooke.
i can klick and klick but the crook disappeared again in my inventory and the key is still hanging there.
someone a suggestion or the same problem????

thank you very much

forgive me my english but have somebody troubles with chapter 6??
i can't take the key with the sheperd's crook.
the crook disappeared in my inventory and the place is still twinkling.

can someone give me a sollution?

To get the shepards crook to work make the bottom of the crook be what lines up with the sparkly section. I had this same problem drove me crazy ^_^

I am stuck in the electrical room in chapter 3. i have to click the spider in the hidden object portion of the game and then he is not there for the web at the end. did anyone else have this problem? how do i move on?

Hey if anyone is having problem with the shepherds crook then just align the bottom of the crook with the top most wire in the sparkling area.. worked for me.. lol...

i am having problems finding the heart key to get in the tower it just keeps telling me to go to the tower. I have gone back to every place and cant find the heart key it says you have to have. Please help

Does anyone have a problem with finding a notebook in chapter 6? When I get into the church there's no list of items, but they keep telling me to go there..