After her beloved Viggo is captured in spectacular fashion by a caped figure (rad) on horseback (radder) with a lasso (raddest), Christine turns to you for her assistance in tracking him down and rescuing him. Because both these two lovebirds were previously in the opera, it stands to reason everything they do must be done in the most dramatic way possible, so naturally Viggo has found a way to send Christine letters from his prison by trained pigeons. You find yourself led to the mysterious Blackhill Manor only to be swiftly separated from your companion and forced to go it alone. Will you succeed in rescuing Viggo and Christine? Or will you find yourself the next victim of the strange Black Widow of Blackhill Manor? Find out in Vast Games' hidden-object adventure Nightfall Mysteries: Black Heart, the sequel to Curse of the Opera and Asylum Conspiracy. Both of which, incidentally, you should have played before this so you know what's going on... but since they're two of my favourite casual download games of all time you've already done so, right? Right. Onward! 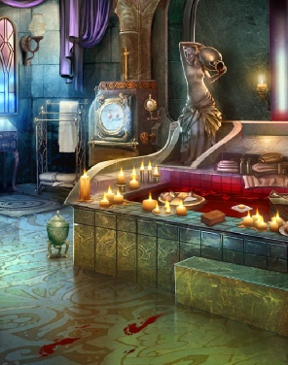 To save Viggo, you'll need to uncover the secret of Blackhill Manor (all manors are contractually obligated to have dark secrets) and his twisted family tree. Unlike most games, Black Heart offers three flavours of difficulty, including an unusual "extreme" choice that refuses to offer any help at all while you play. Hint and skip buttons make their usual appearances, but in most cases they're the only help you have as you go deeper into the twisted Blackhill Manor. Like any good villains, the bad guys here have gone to great extent to leave clues and even tape recordings around to aid you in your search for Viggo, but that doesn't mean it's going to be easy. You'll solve puzzles and hidden-object scenes, avoid attempts on your life more than once, and uncover the truth about one of the weirdest family trees you're likely to encounter.

Analysis: With its flair for high drama, soap-opera complex storylines, and ghoulish charms, Nightfall Mysteries has been a personal favourite series of mine for some time now. Black Heart, happily, continues the tradition and provides a solidly entertaining adventure that constantly throws new clues and scenes at you to keep you engaged. The whole design is beautiful and full of small touches both fantastical and macabre, like a wedding dress designed by Vera Wang, Tim Burton... and Dexter Morgan. Exploring and discovering the audio tapes is a lot of fun, especially since the voice acting this time around is actually quite good. Of course, at this point in the series, the narrative is more than a little convoluted. Despite how drastically it has deviated from its origins, this actually works in its favour by providing a campy but exciting and intriguing little thriller mystery. Plane crashes? Bloody bathtubs? Cowled and murderous gymnastic savants? Beats a stick in yer eye any day. (Who came up with that as an endorsement? What a silly thing to say. Moving on... ) 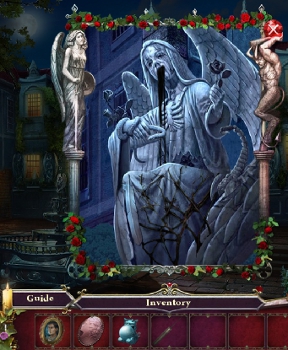 If Black Heart has any real flaws, they're mostly the same technical quibbles the whole series has possessed, such as somewhat finicky click detection or item usage, and the somewhat disappointing "fuzzy" artwork that's nowhere near as sharp as you'd expect. The actual gameplay itself, for the most part, is solid, if standard. None of the item uses are particularly obtuse, but be prepared to use an item once, have it vanish, and then encounter an identical issue that needs a different item more than once. You know, typical adventure game stuff. The puzzles are all mostly stylized versions of concepts you're most likely going to have seen before, and hidden-object scenes are mostly balanced both in terms of difficulty and how often they crop up. Which, y'know, is probably a good thing if you're getting annoyed with "random garbage pile" item assortments in these scenes like I am.

Nightfall Mysteries: Black Heart doesn't really provide any innovation, but it marries story and gameplay better than most games in the genre out there. At around five hours for a leisurely playthrough, it's also a good length. While the perplexingly grainy visuals might be a turn off for some, those that stick with it will find an engagingly cheesy and dramatic adventure that's well worth your time. Give the demo and try, and then go and brush up on your pigeon taming/training skills. After all, these are skills we should all apparently know in an emergency. Bless you, Viggo.

Place the GOLD SNAKES, GOLD STAFF, and GOLD WINGS into the carving on the door.

Place the GOLD SNAKES, GOLD STAFF, and GOLD WINGS into the carving on the door.