One of my favourite games so far this year has been Curse of the Opera; despite some awkward storytelling and minor gameplay issues, it was a stellar example of a hidden-object/point-and-click hybrid with outstanding production values. So if you were to ask me how excited I was to hear that the prequel had finally been released, the answer would be pretty darn excited, sir-or-madam. Nightfall Mysteries: Asylum Conspiracy is a fun, freaky romp that continues the high standard of design set by its predecessor, and also plays well as a standalone adventure. 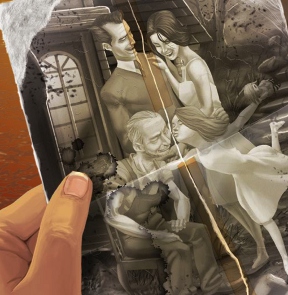 This time around, you play Christine, a young woman all alone in the world trying to track down what remains of her family. All she has left is her grandfather, whose last letter came to her from a remote asylum years ago. She arrives to find the grounds in ruins and the asylum itself apparently abandoned... so, really, it's probably totally safe. You should definitely go there alone and unarmed without any way to call for help. Really. What? Maniacal laughter? Don't be silly, it's probably just the wind.

Asylum Conspiracy is played mostly like a point-and-click title, where you'll have to track down the items Claire needs to get past obstacles by finding them in hidden-object scenes. The genre's staple sparkles mark such scenes, and the cursor changes to a magnifying glass when you can zoom into a spot for a closer look. (Click the "Back" button next to your journal to zoom back out.) If you need a hint, the speedily recharging hint-timer is your friend, and you can likewise skip most puzzles if you find yourself hung up on them for too long. Even more helpful than that is the map, which is accessed through your notebook; areas with objects you need are highlighted in orange, so if you're ever not sure where to go next, make sure you peek at the map now and then.

Analysis: Christine doesn't seem concerned with why her Grandfather was in the asylum to begin with, or why she remains so convinced he's still there even though she hasn't heard from him in years and there's no other evidence of him being there. But hey, there'd be no game if she didn't soldier onwards, and at least it gives us an excuse to explore this beautifully designed locale. This game is gorgeous, with environments rich in detail and colour. The soundtrack is also top-notch, full of subtle ambient noise that adds to the atmosphere and lovely but slightly discordant tunes that fit the unsettling areas. Voice acting, by contrast is... well, it's not bad, but I will be glad of the day when hidden-object heroines move past the fake-sounding, airy, vaguely British accent fad. 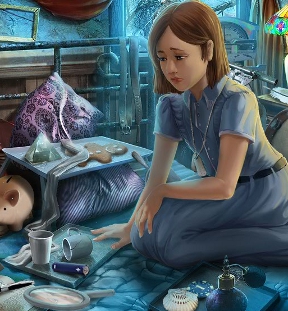 On the whole, Asylum Conspiracy feels a lot more coherent than its predecessor; while Curse of the Opera settled for a nearly impenetrable plot and dropping a bunch of exposition via cutscene in your lap at the end, Asylum Conspiracy does a great job at telling its story naturally throughout the course of the game itself. Of course, it's still not particularly scary; the whole thing has a Midnight Society vibe to it that makes it campy despite featuring some rather morbid environments. Mind you, there's nothing wrong with a good cheesy horror movie, and Asylum Conspiracy is definitely enjoyable with its cornball "Hahaha, seriously?" plot that seems to think it's more serious than it actually is.

The difficulty also seems to have been tweaked a bit. Whereas the first Nightfall Mysteries had a gradual difficulty curve I really enjoyed, nothing about this one is particularly hard. You'll still be glad the hint button exists for some objects hidden in scenes, but the puzzles themselves are in general pretty straightforward and easy despite their typically elaborate designs. You'll rarely be stymied as to what to do with your inventory, especially since the map will always point you towards where you should be. This makes the gameplay fairly smooth but for a few hiccups, such as the game occasionally being slow to register rapid-fire clicks.

Unfortunately, this latest installment in the series is also the shortest so far. You can probably expect to spend between three and four hours on it, possibly more if you take your time or are relatively new to the genre. It's definitely an enjoyable time, and it complements Curse of the Opera nicely, but you'll probably want more when you're done. It does seem as though the developers are leaving the door open for yet another prequel... which would be a pre-prequel, I guess? Despite being fairly easy, Nightfall Mysteries: Asylum Conspiracy is still an improvement over the first in the series in almost every way, and is easily worth picking up if you want to unravel the ball of crazy at the end of Curse of the Opera, or just enjoy a well-made game for an evening.

This is a great prequel to Opera. But the next BF game "Redemption Cemetery" is the real biggie to be released. Took me 8+ hours to complete.

[We've been taking a "wait and see" approach to the collector's editions that come out, opting instead to review them when the standard edition arrives since most people will prefer that. That being said, we will be featuring some of the more compelling collector's edition releases, and so look for a review of Redemption Cemetery next week. -Jay]

going to join the opera to get rid of count Vladd

, but I just started playing Curse of the Opera thinking that the characters were going to look and be the same (since it's the sequel) but am pretty disappointed that they're nothing like the first game. I'm curious to find out if they do end up turning out to be the same people as in Asylum Con. But I still think they should have continued it to be a real sequel to the first, characters looking the same the whole bit.

[Hi, Emily. I took the liberty of adding spoiler tags to your comment so it doesn't ruin the ending for anyone who hasn't played yet. As to the differences between this game and Curse of the Opera, it's important to remember that Curse of the Opera was actually made FIRST, so even though Asylum Conspiracy is a prequel in terms of the story (it was made to "fill in the blanks" from Opera), it was the second game in the series made, which is why everything looks different from Curse of the Opera. (Which was, technically speaking, the "original".) :) Hope that clears things up for you, and please remember to use spoiler tags when talking about plot elements in future comments. Thanks for reading! -Dora]