Nick Chase and the
Deadly Diamond

Nick Chase has never had it easy. Finding jobs as a private investigator is tough, and frequenting every shady hideout in the city doesn't exactly bring a cheery spring to one's step. Plus, the poor guy can't keep his office tidy to save his life. With his first big job completed in Nick Chase: A Detective Story, our hard-boiled P.I. slips into his favorite bar to get out of the rain. Only then, things get interesting. A bit too interesting. So begins our gritty pal's latest hidden object/adventure hybrid, Nick Chase and the Deadly Diamond. 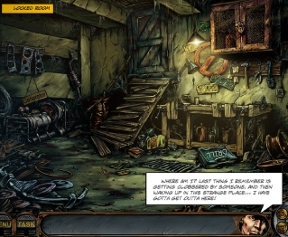 Based on classic detective stories and graphic novels in both content and visual style, Nick Chase blends hidden object scenes, inventory puzzles, and lots of quick mini-games together into a seamless experience. Each scene is broken down into a number of puzzles and sub-scenes that must be solved before the story progresses. Using the mouse, you navigate the game with a few clicks here and there, zooming in on areas when the cursor switches to a magnifying glass and breaking out a hint bullet or two when you happen to get stuck.

You start in Nick's favorite bar where you receive a clay tablet with a strange image on the face. Butterfingers that you are, the thing slips out of your hands and shatters into pieces. The bartender isn't too happy and insists you clean the mess up. To gather all the fragments, you'll need to move objects out of the way, zoom in on a few areas to solve short hidden object scenes, and have a sharp pair of eyes. Need to clean up that trash you just spilled? Look for a broom, then click on it in your inventory to get to sweeping.

Current objectives are listed under a tab marked "TASK" at the bottom of the screen, though the game is so straightforward you probably won't have to check it very often. The story is told through a series of cutscenes complete with THUDs, WHACKs, and other appropriately over-the-top comic-style sounds. The cartoonish effects also make an appearance in the main game, lightening up the atmosphere of an otherwise dark game. 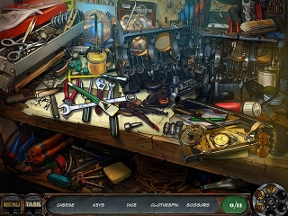 Analysis: Just like the original game, Nick Chase and the Deadly Diamond hits it out of the park with fantastic artwork and visual style. Few casual games manage to capture the feeling of a gritty detective graphic novel so well. The gameplay is no slouch, either, as the hidden object scenes are always short and easy, providing a perfect balance to the adventure-style main game. The whole thing is a remarkably enjoyable experience, a treat for your eyes and your brain.

When compared to its predecessor, Deadly Diamond seems a bit incomplete. For starters, the story doesn't feel as charged as the original, almost as if the dialogue didn't receive one last punch-up before it was inserted into the game. The humor and gritty setting are still present, but not as strongly as in the original game. Also, where's the voice acting? Nick is strangely silent in the sequel, effectively killing the noir feeling from the first game. It's rare when a game gets voice acting just right, but Nick Chase: A Detective Story hit it spot-on. I miss it.

Despite missing a few subtleties that made the first game so enjoyable, Nick Chase and the Deadly Diamond follows strong in its footsteps. More mystery solving, more detective-ing, and more object finding.

Got to agree with Alex.
I loved the previous installment and was worried that this 2nd chunk would have 'improvements' which spoiled things....but very much exceeded expectations....very playable

Every time I quit the game, when I come back it starts over at the beginning.

Fair warning: as of this date (May 29, 2010)there is still a major technical problem with the game. There's a conflict between NCATDD and geoForce video cards which makes all animated moves go....really....really....slow. As in 1-frame-every-2-seconds slow. There may be a patch coming up in the future (hope so).

The "still parts" - HOG, puzzle, you name it - are wonderful. The storyline keeps your interest, and I enjoyed seeing the old characters again. My ONLY complaint is a technical one, and I thought it was a universal problem until I contacted BFG and they ran a "Dr. Fish" scan on my system. Sure enough, both desktop and laptop have some form of geoForce card. It literally makes the game unplayable.

Have YOU ever waited 20 seconds for a broom to make an animated move from the floor into your inventory? Tends to take you out of the game a bit.

Other than that, it's a 5/5. And I'm still sad I can't skip all animations. It's a really good game.