Are you ready for a light science fiction adventure with some nautical flair? Nemo's Secret: Vulcania is an adventure/hidden-object hybrid featuring just that, with a hint of Jules Verne thrown in because it's always a good idea! With some unique puzzles and animated hidden-object scenes, Odian Games' sequel to Nemo's Secret: The Nautilus offers a refreshing hybrid game without the usual murderers and supernatural spooks. It's enough to make anyone want to hop ship and have a spin at the wheel.

Your friend, Captain Nemo, is an inventor with utopian aspirations. What he didn't count on was for his partner, Dr. Dardell, to turn on him. Dardell, an antagonist from the classic era when bad guys instinctively twisted their mustaches, is intent on using the technology they've developed for his own purposes. It's up to you, Alice, to travel to Vulcania Island in the Atlantic Ocean to save Nemo, but you're not going at it alone as his flying robot friend is there to assist. If only the evil Dardell weren't one step ahead of you at every turn. 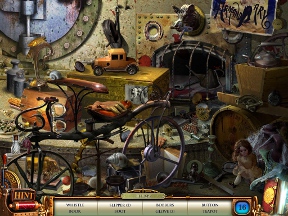 With a changing cursor at your command, explore Vulcania as you get to the bottom of what's happened to the captain. The inventory bar at the bottom conveniently hides when not highlighted but can optionally be locked in the up position. There is a large array of puzzles to solve, some are variations of what you may have encountered elsewhere, others are original to this game, and there is only one instance when a puzzle concept is used more than once, which is always a plus.

The hidden object scenes are not only interactive, but also animated, giving you the feel of searching through an actual location and not just a stale, stationary picture. You are only given eight objects to find at a time, and once you've found the objects of a particular column in the list, it will then show you the next few items. The total number is displayed to the right of the list, and if you're playing in normal mode, clicking the name of an item will display the silhouette of that object to aid you. Unlike most hidden-object games where you acquire one of the objects you have just found, in Vulcania, once you've completed the list, you are then tasked to find an additional item that requires you to interact with the scene. 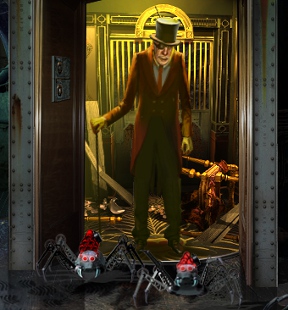 Analysis: What Nemo's Secret: Vulcania invitingly offers is a fun storyline with some Jules Verne-inspired science fiction (Captain Nemo is, after all, a Verne character). Puzzles are varied, ranging from hidden-object scenes to mini-games to gathering the correct items to fix a mechanism. Vulcania is a good-sized island, but no map is necessary as the developers have done a great job of slowly giving you access to new areas, allowing you time to become familiar with where you are before moving on. This is an important consideration since you are often traveling back and forth.

Unfortunately, for a game that has you reassembling several machines, there's only a small hotspot for each part, requiring you to know exactly where the object needs to be used. To counter this, though, the hint system works very well, showing you a miniature screenshot of the location to which you need to go, as well as where to use what object.

For a game inspired by Jules Verne, they certainly have done him justice both in the story and in the writing, which is featured in your notebook. The pages are updated every time you encounter something important, so to truly experience everything Nemo's Secret: Vulcania has to offer, you'll need to read it regularly. Even without reading it, you're in for an adventure, so take a leap and dive right in!

GOAL: Find a Way under the Hotel

GOAL: Get to the 2nd Floor

GOAL: Find a Way under the Hotel

GOAL: Get to the 2nd Floor