Raincliff is a town with a weird reputation, and when a budding reporter goes missing covering the myth of a family of invisible people, you get called in to find her. After all... you know the myth is both real, and dangerous. In Elephant Games' hidden-object adventure Mystery Trackers: Raincliff's Phantoms, you'll return to the town that nearly killed you in the second game of the Mystery Trackers series, and it's as deadly and weird as ever. The town is anything but abandoned, and its strange inhabitants don't like you sticking your nose into their business again... after all, you did nearly blow the place up last time, but it still seems like they're up to something. They all appear to be afraid of someone in particular, and with all the axes, broken glass, and baseball bats aimed at your head, maybe you should worry too. 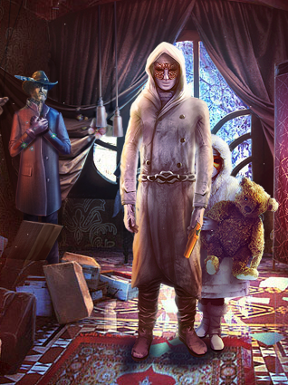 Though Raincliff's Phantoms plays like your typical hidden-object adventure as you hunt for items and solve puzzles using things you find, it does offer a few twists. The morphing collectible objects now have a use, keeping you warm if you're playing in Frost Mode for the secret bonus at the end of the game, and you'll also find videotapes to watch that will provide clues to hidden locations. Yes, you also have your intrepid little yap-yap dog to squeeze into small places and retrieve items for you, your magic hint-dealing toad, and that wonderful instant-travel map. Elephant Games has always designed user-friendly games, and with a bunch of difficulty settings on top of it all, Raincliff's Phantoms is no different. You'll find yourself doing a lot of back-tracking, yes, but the map and its helpful "DO STUFF HERE, DUMMY" icons makes it less of a chore. The gameplay itself will likely only offer any sort of challenge if you're playing on the hardest difficulty since the hints are too helpful. Adventure game logic will rear its head from time to time, but hey. You're playing a game where your sidekick is a magic frog. As a great woman once said, Captain Logic is not steering this tugboat.

In its own way, Raincliff's Phantoms is just as crazy as Mystery Trackers: Raincliff, which is a good thing, since as weird as it is, it's also creative and keeps you guessing, and at around four hours for an average play, not counting the additional bonus chapter in the Collector's Edition which has its own story, a solid length for some warped mystery solving. It's packed with cutscenes, plot twists, mild jumpscares, great atmosphere, and gorgeous art. It's more campy than serious by a long shot, so you should try the demo if that's a make-or-break situation for you, but Mystery Trackers: Raincliff's Phantoms delivers high-quality design and gameplay all around for a polished adventure that shows other games in the genre how it should be done.