Mortimer Beckett and the
Lost King

Position available: Hero. Job Requirements: Find one (1) king and eight (8) jewels. Intrepid red-heads desiring to return to their own realities should apply within. Adventure and hidden object skills a plus. Must like mini-games. 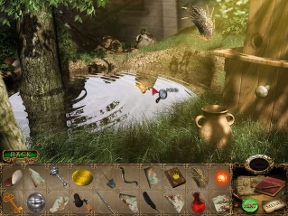 Mortimer Beckett and the Lost King throws you right into the story, so if you haven't played the previous game Mortimer Beckett and the Time Paradox, a little background might be helpful. Without spoiling Time Paradox too much, Mortimer was trying to get home from various time periods of the real world. Instead, in Lost King, he discovers himself in another world entirely, a fantasy kingdom.

Unfortunately this kingdom is now just a -dom, because the king has vanished, leaving behind his Obviously Evil Counselor to usurp the throne. If these "good kings" are so great, why do they keep these guys around in the first place? The dude has a hook nose and a scar across his eye, that's the fantasy world equivalent of wearing a sticker that says, "HELLO! MY NAME IS EVIL VAN DER DOOM". Anyway, the only one who can save them all is Mortimer Beckett, possibly through the animal magnetism of his magnificent red hair. Look, don't ask too many questions.

If, when you're playing hidden object games, your favorite part is finding an object and then using it in a scene (sometimes called "inventory puzzles"), you're going to love Lost King, because aside from mini-games, that's the entire game. This makes it more of an adventure game in theory, but somehow it still has a hidden object feel to it, perhaps because the items you're searching for are helpfully pictured in your inventory (a definite improvement over the previous game). 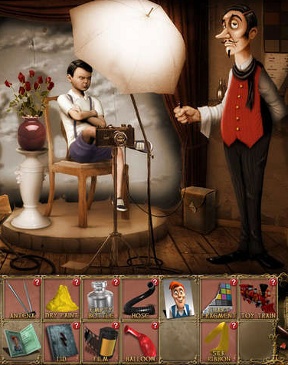 Using the mouse, you explore around looking for items and puzzles. For replay value, items are not located in the same place every time. When you find an item and think you know where it goes, you can click on it and click on the hotspot, for example, "Use pancake on bunny's head". You might be rewarded with a jewel fragment, or with a something else to help in your completion of an area. There are also mini-games.

Analysis: This game has some of the most gorgeously animated cut-scenes I've ever seen in a casual game. The inventory puzzles are fantastic. The use of an item is always logical, with no "use spork on little girl" randomness, but not so obvious as to feel tedious. Players will also enjoy the variety in the themes of the chapters, from high in the clouds (my personal favorite) to the depths of the sea. My only complaint about them is that I'd want them to be even longer.

I can't say the same about the mini-games, which felt more like padding than challenge. One in particular requires you to remember the locations of two cards out of fifty. You have to sit there and watch as the cards slowly, slowly, SLOWLY turn over, one by one. The hint system also doesn't work on the mini-games, and as far as I can tell there's no way to skip them. The game length, by the standard of games coming out now, is also very good: it took me about four hours.

For fans of adventurous hidden object adventure games, Mortimer Beckett and the Lost King will really hit your sweet spot, and every player will enjoy its beautifully rendered and voiced cut-scenes and romping if predictable plot. It's definitely not one to miss.

I love these Mortimer Beckett games, especially how everything you find is actually used for something, but I find they're just too short, if you play it until the end you would probably only get a few hours out of it, maybe if they could make it longer?

Having a problem with getting past rockberg in Mortimer beckett and the lost king. Can't enter into the "UPPER TOWN" HOUSE to complete the game, does not let me in the townhouse, there isn't any "enter here", putting cursor near the door,clicking there, nothing, can't get access. Anyone have any resolution to this? CLICKING AT DOORWAY does nothing.

Hiya, loving these Mortimer Beckett games, the only problem is I'm stuck! Can anyone advise me on how to get the underwater chest open? I've found a combination lock on a bit of wood, but having been going out of my mind trying allsorts of combinations for it :(

Any advice would be appreciated
;)