Ah, the thrill of the mall! The disdain of the barista serving you your overpriced latte, the obnoxious spraytans loitering outside the polo shirt store calling each other "bra", the sales on stuff you don't need but will buy anyway because you're weak... it can all be yours with Kairosoft's latest installment in the simulation "Story" series (Game Dev Story, anyone?) Mega Mall Story for your iOS device. You've got fifteen years to turn your struggling little strip mall into a sprawling megaplex worth five stars, and while you may not have much to begin with, with a little bit of planning and a little bit of funding to improve and grease the wheels of the local community, you'll be rolling in dough in no time. Selling out was never so addictive! 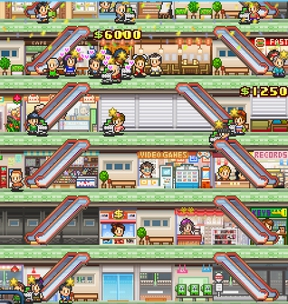 You'll start out with only a few shops available and a few floors on which to build, but don't worry... that's all going to change. While it might be slow going at first, concentrate on letting your mall build up a modest amount of cash; since you have to pay for restocking, maintenance, and any advertising at the end of each day, you don't want to spend money faster than you can make it. Initially, you won't be able to build many things, but as your reputation increases you'll be able to buy more blueprints, and, if you're lucky, loyal customers will become investors or introduce you to certain people or products that are worth your while. When you've got enough money, you'll also want to start thinking about investing in the local neighbourhood; not only does it look good for you, but it also attracts new customers to the area, and can even apply certain upgrades that will help you in the long run, such as covered walkways for rainy days and an economy that doesn't feel the sting of a recession quite as badly.

There are two types of currency in the game; cold, hard cash and "hearts". Hearts are earned whenever a customer is particularly happy with their shopping experience and can be spent not only on blueprints for new facilities, but also on improving your stores and holding sales. Cash, naturally, is important for the day-to-day running of your mall and building new shops and the like. Your shops can't earn you money if they can't meet the demand of your customers, however, so make sure you keep an eye on them; as shops level up, you can spend hearts on them to increase their inventory, or even add new, more expensive items to sell. All of this is important since you'll have to meet certain requirements in sales, shops, and loyal customers before the mall association will grant you a precious star and bring you that much closer to your goal... 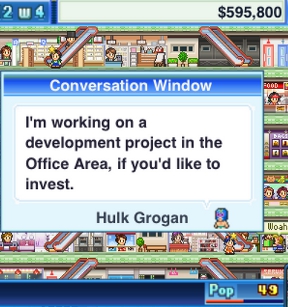 Analysis: While it might be the simplest Story title yet, Mega Mall also might just be the most easily accessible and addictive. Like most recent Story titles, this one sorely needs a fast-forward button, especially in the early stages, but by keeping its gameplay relatively simple and snappy it doesn't take long before your screen is swarming with hundreds of tiny, strange hypnotic shoppers. The ability to pay a small fee to simply swap stores around lets you easily manipulate your layout without losing your upgrades, which means those of us with obsessive compulsive tendencies can lay out everything just so and earn all the combos as they become available without dropping a lot of extra cash.

Of course, it helps that the game can be unintentionally hilarious; I promise you the first time someone storms into your pet store screaming "WHAT'S THIS?!" and drops tens of thousands of dollars on cleaning out your entire stock of puppies you'll laugh (... nervously... ) too. Like most of the Story titles, Mega Mall suffers from repetition and doesn't feel like it necessarily holds a lot of replay value once you've "won", especially since after you've plunked down a good number of shops it kind of feels like the mall is running itself and you're just standing around with a chequebook. Fortunately, there are a lot of stores and combos to find, and since many of them only unlock once you've satisfied certain conditions, completionists will be playing for a long time indeed. The game is chock full of strange characters too, so those of you who have always wanted a store where ducks, UFOs, and luchadores could shop side-by-side in harmony will find a kindred spirit here. Fast and simple but oh so fun, Mega Mall Story is a bright and colourful little game you can lose minutes or hours to without even realising it.

any idea when this will be available for android?