It's more than an action game meeting a role playing game. It's more than an amazing co-op experience. It's more than a collection of hilarious dialogue and geek culture references. It's Magicka, and it's the next game that will claim hours of your life. From Arrowhead Game Studios comes a hybrid title that emphasizes teamwork, alchemy-like spellcasting, and gaining an invincible knowledge of how elements work in relation to each other and the environment. Oh, and there are moose. Lots of moose. 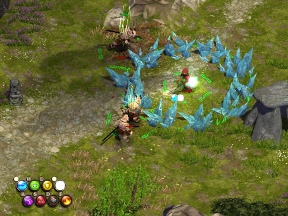 Magicka starts out innocently enough as you, a wizard in training, move through the academy and learn to combine basic elements to create powerful spells. These spells have an affect on the environment, such as lightning powering machines, water dousing fires, and ice freezing pools of water. The game even goes so far as to prevent you from using lightning spells while you're wet. How do you dry off? By casting fire on yourself! Even more importantly, though, is the fact that these elements interact with each other, allowing you to combine elements to create powerful spells with a massive variety of effects.

Spells work using a simple combination of eight elements, each tied to a single key on the keyboard. Pressing [R], for example, adds an ice element to your queue. At this point you have several options at your disposal. For starters, you can spray a blast of icy death from your staff. You can also enchant your sword to gain a temporary freezing stab. Or, why not cast ice on yourself, see what happens? And if you want a stronger, bigger blast of coldness, add up to five ice elements to your casting queue and let the freeze fly!

But why press one button when you have eight at your disposal? Mixing elements is how you play Magicka, and that's where the genius of the game rests. Mix that ice element with an arcane element and suddenly you've got a wide beam that travels across the screen. Mix it with the shield element and you'll summon an ice wall for protection. See how complex and cool this gets? Now picture this: Magicka allows you to craft spells from eight elements (water, life, shield, ice, lightning, arcane, earth, fire), adding as many as five per concoction. You could literally just stand in the forest and mix elements for hours! And enjoy doing it! 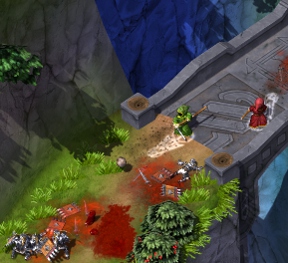 Not every elemental combination produces interesting or different results, of course, but some elements have unique interactions that make brand new elements. Combine fire and water and you've got steam. Combine steam with arcane and you've got a strong steam blast. Experimenting with spells is your key to mastering Magicka (or, more accurately, actually making it past the third chapter), and it will take some time before you hit your stride. Stick to a few spells at first, anything you can quickly remember and key in, then expand your arsenal to use more creative, effective spells as time goes by.

Magicka is focused more on action and combat than traditional RPG components, so you'll spend time fighting off waves of smart enemies instead of walking through maze-like dungeons. There are, however, some items to find, such as spellbooks that teach you new magicks to cast (thunderbolt, anyone?), and you'll also find the occasional new sword or staff that comes with its own unique set of abilities. There's no inventory system (which some characters in the game jestfully point out), so you can only carry one of each item at a time. Magicka doesn't suffer from a lack of item management, however, as it's all about the co-op combat action.

Analysis: Magicka is well-written, quick to draw you in, laugh out loud fun to play with your friends, and just plain amazing. While it's more than competent as a single player experience, the real entertainment begins when you get a friend or three to join. Spellcasting isn't an exact science, and you'll find you zap, burn, fry, blast, and destroy your teammates almost as often as you vanquish deadly foes. That's cool, though, as it's all a part of the game! Reviving a fallen buddy is just three keystrokes away, and there's never any hard feelings. It's all a part of being a wizard. 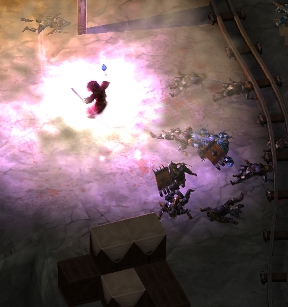 And the humor. Oh, the humor. Magicka is easily one of the most laugh-inducing games I've played in months, right up there with Psychonauts. The dialogue is brilliant, filled with in-jokes only those well-versed in geekdom will understand. Expect references to just about every major sci-fi series or video game release in the last few decades, including but most certainly not limited to Star Wars, Star Trek, 300, Final Fantasy, Back to the Future, Highlander, Harry Potter, StarCraft, and, well, yeah, you get it. You'll feel like you're playing a game that was made by you, for you. Which is yet another reason why Magicka is so utterly brilliant.

Now for the down side: glitches. Magicka's release was plagued with problems, including random game crashes, self-deleting save files, network connection errors, and so on. The team at Arrowhead Game Studios has been working diligently to squash every bug that's appeared, and they've been remarkably communicative with the Magicka community. Now, a few weeks after the initial release, the game is much more stable, but you'll still run into a problem or two from time to time. Despite this, however, Magicka is still a must-buy title. Even if you have a problem with the game, chances are one of the frequent patches will fix it right up within a few days.

Magicka is exactly the game you want to play. It's so well-crafted that it pulls you in right away, yet it will be hours before you feel like you've scratched the surface of the intricate elemental spellcasting system. The co-op action is such a riot, the humor never lets up, and the game will keep you occupied for six or so hours for just one run-through (though you'll want to do many more). The shortcomings are few and decrease in number just about every day, so don't hesitate to pick this inexpensive game up immediately. You'll thank yourself later with all the laughing, spellcasting, and co-op gaming you'll experience time and time again!

P.S. Vlad is not a vampire. Seriously!

Windows:
Download the demo (available through Steam) Get the full version

This list is by no means comprehensive, but should get you started. If you've got a good tip, post it in the comments.

Thanks to Max for the Strategy Guide

An absolute gem, well worth the money. Not-vampires? Check. Goblins mooning you? Check. Death rays? Check. Asplosions? What flavour do you want them in?

The magic system is awesome, with many possible combinations; the combat is extremely fun, especially when you accidentally kill your team-mates; the dialogs are hilarious. It's undoubtedly the best game I've played for quite some time, for me it's the game of the year.

These are required to produce some of the larger spells, and also to produce the single most unbelievably OP attack in the game, the dreaded Steam Electric Beam.

Steam-Elec-Elec-Elec-Arcane. The Steam wets its targets and the Electricity reacts to that wetness, vaporizing even most bosses in seconds, if that long. Arcane, obviously, puts it into Beam format.

(Also, if you are EVER having serious difficulty with bosses, consider that Nullify (shield-arcane) is a blisterly OP spell that will instantly destroy all shields, buffs, summoned constructs etc etc etc.

(The last boss can be easily defeated by quickly casting Nullify as soon as he does ANYTHING.)

I'm glad to see JIG's review of this title, after reading others and actually playing the game.

I absolutely loved the game (I beat the game - though still going for various achievements and such). I was initially in some doubt, but after playing the demo through a number of times I was convinced. This is by far one of the best games I've played in a while - not to mention the price is great.

Even though I only get a number of the references (no where nearly all of them - I had to use 'Magickapedia' to explain the rest), I still found this game very funny.

Finally, I really enjoyed certain levels which were really innovative and made you remap your key bindings (meaning your natural instinctive spells) for more thought based casting, such as 9 & 10 (especially 10 with the elementals).

Even though I've played through the whole game (single-player), there still feels like a lot to do - and even stuff I don't get (such as why some seem to be able to change up their characters' looks pre-chapter). And of course co-op is just hilariously fun.

I highly recommend this game.

I consider buying it. One question: Do you have to buy the game twice (Non-Steam Version), to be able to play it Coop on LAN?

This game is fantastic.

Surferjack:
I don't know about LAN, but if you've got gamepads, you can play with 2-4 people on one computer.

DO NOT BUY THIS GAME IF YOU ONLY USE A LAPTOP!

The game does not work on most laptops, a fact already confirmed by the developers. If you are uncertain or don't believe me, google this issue and save yourself the 10$ you'd waste otherwise. There are threads up on the game's Steam forum, and the devs have chimed in.

Additionally, compatibility for laptops is low-priority when compared to more content, so don't buy it in the hopes of a quick fix. If your only platform is a laptop and you REALLY still want the game, google the issue every few week to see if the devs have done anything about it.

add me if you need someone to play with.

I wish they'd patch the thing with a "single-player" difficulty setting in which it is actually possible to play past Chapter II without an squad of helpers. Not being outnumbered 20-to-one might be nice once in a while, and it doesn't seem like it would have been much trouble to implement that as a choice. Jeez.

Realy? I have gotten to level six playing alone. It's all about finding the right spells that suit you. One good way its using sheild and rock on yourself. You will be encased in a giant boulder and can cast a longer spell.

This list is by no means comprehensive, but should get you started. If you've got a good tip, post it in the comments.

Thanks to Max for the Strategy Guide