Maestro: Music from the Void

If you're ever watching YouTube videos with distressingly talented musicians and feeling inadequate, just remember that musical prodigies tend to be almost exclusively targeted by dark forces for sinister means, including but not limited to pacts with demonic entities and being in danger of having your soul sucked out through your kiester by a mummy. (It's true. Look it up.) In ERS Game Studios' hidden-object adventure Maestro: Music from the Void, an entire town is beset by terrible things that seem to stem from disappearances and strange music coming from its esteemed musical academy. Turns out someone has played a tune that has summoned some seriously dark things, and only tracking down a legendary instrument and sheet music to thwart the evil will save you. What, nobody's heard of iPods? Come on, with a high quality MP3 and a decent speaker dock I bet you could exorcise the heck out of evil spirits. No? *sigh* Peril and puzzles it is then. 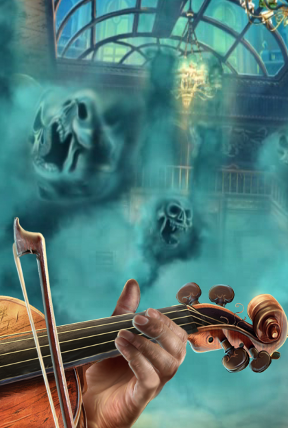 Just click around to gather items, solve puzzles, and generally make yourself a nuisance to the forces of darkness. Some of the game's hidden-object scenes are essentially shadow-hunts with point-and-click style object puzzles in isolated areas, where you track down objects one by one via their silhouette and use them within the area to eventually unlock what you're looking for. Since the entire town is now gleefully haunted by wicked souls making mischief (and, you know, sucking the life out of people), you've got your work cut out for you. Lucky for you, in short order you'll find yourself in the possession of a legendary violin whose music can drive away spirits... though you'll have to track down the sheet music yourself so you can play it whenever you find yourself stonewalled by ghosts. But just what is really going on here? Who is this mysterious "madman" who attacked the academy with devilish, devastating music, and how does the disappearance of Ludwig and Helga, two academy students, tie into all of it? More importantly... if every door in this place requires some sort of intricate puzzle lock, how does anyone ever get to the bathroom in an emergency?! 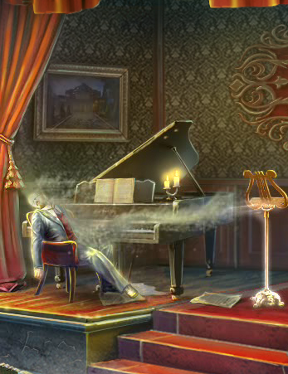 Analysis: Like its predecessor Music of Death, Music from the Void is a gorgeous, highly polished title that continues ERS's new trend of leaning more towards traditional adventure gameplay over scrounging through hidden-object scenes. Unlike the first game, however, Music of the Void focuses on delivering a much more cinematic experience, weaving in fully-voiced cutscenes with a story you'll actually pay attention to. It is not, however, a game for you if frequent repetition frustrates. Music from the Void has no qualms with making you backtrack or play the same hidden-object scene (with different items) again within minutes of having completed it. Additionally, regardless of what difficulty setting you pick at the start of the game, you'll probably find the overall challenge level of the game on the low side. Considering the game's gorgeous design and casually engaging gameplay, then, it's a perfect choice for a relaxing evening... or maybe more, since you can expect to spend over four hours on it.

But while its gameplay doesn't necessarily innovate, it definitely entertains. Maestro: Music of the Void delivers an elaborate adventure full of twists, turns, strange puzzles, and stranger characters. ERS knows how to deliver solid games every time like few others, and if you're already a fan, you'll both appreciate the workmanship on display here and how hard they continue to push themselves to refine their craft. With a sprinkling of ghoulishness on top of its supernatural premise, it's creepy without being gory or gross, and beautifully illustrated to boot. Give the demo a try if you're looking for the chance to thwart the forces of evil with the power of song. One can only hope the next game features 80s rock ballads instead of violin concertos, but I guess classical is okay too.