Once upon a time, an exceptional game designer decided to put his hands to making a 'cool' game. It worked. The result was Excitebike, a fast-paced and challenging motorbike racing game. Released this year is the strikingly similar debut game from Turborilla, the aptly titled Mad Skills Motocross. While there are obvious differences between the two games, the general idea of "move right using a motorbike while making jumps and going fast" is here, and that's what we like to see. 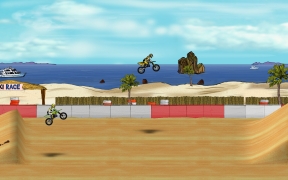 You play as a motocross stuntman whose sole driving goal is to beat the brains out of a bunch of similarly clad (but different coloured) motocross stuntmen. Doing this is not as easy as it sounds, as your opponents will use every trick he knows to jump faster, move quicker, and backflip more stylishly than you, all in a mad race to be the first to make it to the end!

Most of the action will take place using just the [arrow] keys. Accelerate using the [up] arrow, brake with [down] and rotate either direction by pressing [left] or [right]. When on the ground, the [left] arrow can be used to streamline the player and gain a slight speed increase. If in the air, rotating can cause you to flip in a complete circle, which will earn you stars.

As you progress through the increasingly crazy level designs, your good friend Doc will add things to the mix. First on the agenda: a jump pad. Next comes a turbo rocket boost for your bike. Utilizing these additional tools you can hop, skip and launch yourself higher than the top of the screen, spending the airborne time backflipping and hoping your bike doesn't fall apart when you land. You can even use tricks like this to skip entire sections of track, so you'll be spending a fair amount of time analyzing the best spots to launch yourself from.

For the most part, Mad Skills Motocross is solid as a rock. There are several divisions to qualify for and there are additional collectibles such as the ticks and stars to grab, too. The icing on the cake is, without a doubt, the comprehensive level editor. You can create devilishly difficult or angelically unimposing tracks with custom sized and shaped hills, mountains, ramps, dips, bumps, grooves, boosts and anything else needed in order to create the fully functioning level of your dreams. 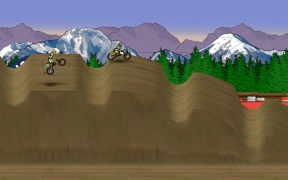 Analysis: Mad Skills Motocross is Excitebike for 2009. Whereas most games tend to ease you into play with bare controls and easy physics, this one isn't afraid to make you work for your wins. Learning to handle your bike is a big part of the experience, and it's unfortunately something that will turn many casual players away right from the start, as it takes some time to master.

Once you get used to the controls, Mad Skills Motocross is exceptionally fun. The jumping and turbo skills come in handy to gain some ground, though I wish the game let you choose which modification to equip. Also, you can only activate one skill per track, so all that time you spent mastering jumping will be useless when suddenly you can't!

More on-screen information would have been useful, such as a mini-map or a speedometer, but it isn't necessary to enjoy the game. The only other criticism I have is the infallible computer-controlled racers. Sometimes they're so adept at understanding the ins, outs, ups and downs of every track, they can fly through with graceful ease. This is frustrating, to say the least, as you have to restart many, many times before you can do half as good.

Keep an eye out for the upcoming online multiplayer mode, something that will surely eat up a lot of your afternoons and evenings with your friends. In the meantime, I will be returning to the dusty plains and impossibly-balanced mountains in order to, hopefully, shave another second off my time and beat that blue bike once and for all.

Bonus! The first 25 people to buy Mad Skills Motocross can save 30% by using this coupon code at checkout: BMMB000H7

Its a pretty good game with lots of tracks to hone your motorcross skils, and they are really put to the test. The handling and feel of the bike is pretty exclusive, and you will get a lot of cool power ups to master too.

Fun game and very cool that they made it available to us linux users.

The game played well but there was one issue. When trying to quit, it froze up. I had to restart X to get out.

Haha, check this video out: http://www.youtube.com/watch?v=uJBBCjqeTiY

Would buy it at half that price as it's good, but it's not £19.70 good without any online multiplayer

Great game but I agree that it is over priced. I would have bought this game for $10, but not chance at $25.

I should have read Adams review more thoroughly before commenting as it does state that online multiplayer is coming......... even with this, twenty quid is still quite an extortionate price to pay. Unless the dev drops the price I doubt that this will be the success they hope. It's a shame because they've nailed the motocross physics brilliantly and the game has the potential to be a classic

Wish there was a 'distance meter' that showed how far behind the opponent you were, not just how far in front!

Will watch keenly to see if anything changes with the price

I bought this game (£13.44 with the discount) and am thoroughly enjoying it. As a pro with Trials and Trials 2, the controls were very intuitive (and dare I say it, better) but that's not to say this isn't a challenging game.

Currently making my way through division 1 but have no hesitation in giving this one a 5/5.