Macabre Mysteries:
Curse of the Nightingale

Blue Tea Games, a studio that knows its hidden object adventure genre better than a chef knows how to boil water, is at it again. Following series such as Enlightenus, Dark Parables, and Forgotten Riddles is a tough job, but Macabre Mysteries: Curse of the Nightingale definitely holds its own, crafting an environment filled with intrigue, danger, mystery, and loads of shiny objects to find. It's a hidden object/casual adventure game for the most discriminating fans, and it never fails to impress from beginning to end. 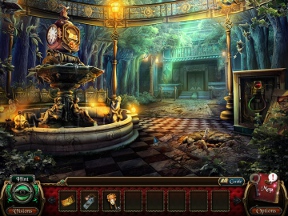 The Nightingale Theater was destroyed by a devastating fire over 40 years ago, leaving charred ruins and destroyed careers in its wake. You receive a golden ticket in the mail from your grandfather inviting you to attend what promises to be an amazing ballet performance. Unfortunately, the only ballet you see is a malefic ghost who stalks the theater grounds, following you from room to room and causing havoc. On top of that, you notice several other apparitions who stalk the area, and before you know it, you're trapped in the haunted theater, alone and frightened. Some dance performance this turned out to be!

Gameplay is a balanced mix between item hunting, puzzle solving, and hidden object scenes. Much of your time is spent moving from area to area, clicking on sparkling spots to get more information or to take a closer look at something important. There's a surprising amount of inventory items just sitting on the ground. You have to keep your eyes open for things on just about every screen, clicking on anything that seems even remotely interesting. You never know when it'll come in handy!

Hidden object scenes are a definite strong point in Macabre Mysteries, and even if you're "meh" about hidden object games in general, this game provides some honestly engaging item hunts. Instead of looking for names from a list below, you're assembling pieces of things based on pictures at the bottom of the screen. Some of objects are genuinely challenging to find, and instead of storing a series of names in your head while your scour the screen, you have to take a different approach to each area. Things like "a strappy thing with gold bits on the end", "swirly golden whatsit", or "cheese grater" will become a common shorthand while you search for items, but it's a good time and a great way to approach hidden object scenes. 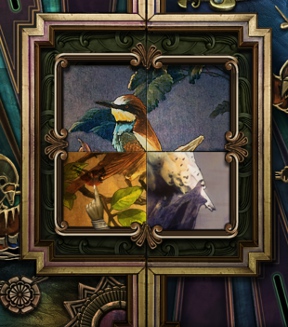 Analysis: If you're familiar with Blue Tea Games, especially the studio's Dark Parables series, you pretty much know what to expect with Macabre Mysteries: Curse of the Nightingale. As far as gameplay and general structure is concerned, of course. Storywise and puzzlewise, Macabre Mysteries is on its own, and it's an experience even hidden object veterans will love jumping into. The game even includes a few nice additions such as "morphing" objects and a bit of time travel-esque abilities!

The hint system in Macabre Mysteries is worth talking about, as it's very precise and allows for a lot of directed information to be spilled your way. Within hidden object scenes, the hint button shows you precisely where an item is stashed. Fair enough, pretty standard, there. Outside, though, you get to drag inventory items to the hint spot and a little window appears showing you where that item can be used. Pretty nice! Also, the map has less obvious hints that points you to the area you should be investigating. You can basically "cheat" your way through most of the game, but nobody's forcing you to use those hints!

Macabre Mysteries: Curse of the Nightingale gets a lot of the more technical aspects of a hidden object game spot-on perfect. It's easy to play, has a storyline that's a bit trite but workable for the genre, and features plenty of mini-games and smart puzzles you keep you engaged from beginning to end!

The scholar is on the left, the princess in the middle, and the warrior on the right.

I really enjoyed this one. Thanks for reviewing it! It's good to see that there are still CEs that tell a complete story and do not rely on the bonus chapter to explain it all. And the morphing objects were more challenging than in the Dark Parables series - or maybe I just wasn't paying enough attention... ;-)

The scholar is on the left, the princess in the middle, and the warrior on the right.