Lost in the City

Ever wanted to combine a hidden object game with a riddle-centric room escape title? Like strawberries and bananas, the two genres go together remarkably well, as Elephant Games' Lost in the City eloquently showcases. Steeped in mystery, you travel from room to room finding items, solving puzzles, deciphering riddles and completing simple mini-games as you unravel a particularly intriguing storyline filled with strange plot twists. 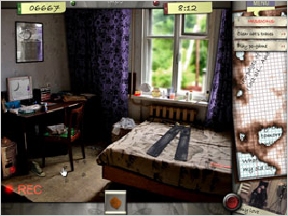 Your first date with the charming April went well, and you were quickly falling for this beautiful girl. The bliss didn't last long, however, as you began to feel strange after an innocent cup of coffee. The next thing you know, you awake in an abandoned city, lost and trapped with no knowledge of how you got there. A series of clues seem to be guiding you to something, so with no better plan of action, you set out to follow the path wherever it may lead.

Each room presents you with a handful of items to find as listed on the right side of the screen. A magnifying glass is available to get a 10x zoom on an area of the scene, so don't be afraid to use it for those tiny objects. In addition to finding objects you'll often have tasks to complete such as "play the video tape", "drink the coffee" or "use the phone". How you accomplish these tasks isn't explained, though everything is spelled out quite nicely with the items you pick up and store in your inventory.

For the mini-games, expect nothing more than a few simple "assemble the image" puzzles alongside keypad riddles where you have to figure out the code. Pretty standard stuff, the challenge level is just about right, and you won't be jolted from the game's somewhat intense atmosphere by an ill-fitting puzzle getting shoved in front of your face.

As you move from room to room the storyline is gradually unveiled piece by convoluted piece. Where are you? How did you get here? Who is playing this game with you and why? And most importantly, what role does April play in all of this? 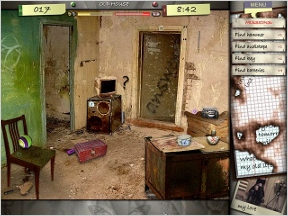 Analysis: Games like Lost in the City are my bread and butter of the casual adventure world. Its strongest feature is by far the story, and I was drawn in from the "oooh"-inducing opening paragraph. It's a bit like watching an episode of Lost, with new questions being raised at every turn. Gotta love a good mystery, and Lost in the City delivers. The game's structure is also pleasing and manages to blend the best parts of the room escape genre with a hidden object game.

There's very little to criticize about Lost in the City, as most potential flaws are smoothed over by the fact that the game doesn't overextend itself and try to be more than the sum of its parts. Yes, the object finding can be a bit tedious, yes, the visual quality of some of the scenes could have been punched up a notch. But in the grand scheme of things, these don't detract from the experience of intrigue and mystery.

One thing I would like to lodge a complaint about is the scoring system. In games of this nature, exploration is what it's all about. What can you click and what happens when you try? Here, however, you're punished for misclicks with a penalty of lost money. Money is used for buying hints and unlocking bonuses from the title screen, both nice extras for any game to have. The problem is I'm afraid to try anything for fear of losing cash, leading to an unfortunately strong sense of game paranoia. The casual mode makes things less stressful than the full-on timer mode, but I still feel the punishment for trying to play the game is far too harsh.

Lost in the City is an excellent blend of casual hidden object gameplay and classic room escape adventuring. If you're a fan of either of these genres, enjoy a good mystery, or have a hankering to solve riddles, taking a stroll through this game is a no-brainer.

Lost in the City - Walkthrough

white one, which says: AUDIO

Thanks so much to Kayleigh for writing up this walkthrough :D!

I don't think this game shares anything with "Lost" other then part of the name. It feels more like "Saw" then "Lost" judging by the first few levels.

Overall, I think this is one of the smudgier hidden object games I've seen recently.

It's a nice game and all, but the plot ends up as a bit of a let-down.

I just played this game. I enjoyed the story but thought it was way too easy, both as a room escape and as a hidden object game. It would have been nice if the mini-games were more varied - I was bored with the swapping-squares picture puzzles by chapter 7. I finished 16 chapters during the 1 hour demo but bought it anyway when I heard there were 40 chapters. All in all, it was a fairly good use of the freebie coupon I used to buy it.

Sorry but..Ugh! I'm afraid that I only found it annoying. No challenge, just repetitive. I couldn't wait for it to end.

This game is aimed at 10-15 year old children. Better have their parent's credit card handy!

Lost in the City - Walkthrough

white one, which says: AUDIO

Thanks so much to Kayleigh for writing up this walkthrough :D!

I thought it looked pretty stylish, but even with my screen as bright as I could make it the game was just too dark for me to be able to find things so I gave up.

I'm curious. What's the full story of this game?

I've hit a glitch in the game.(Lost in the City) plugging in the phone and charger. I have tried every way I can to 'plug' in the charger to no avial. I have shut down and tried again and again. I don't know where to go or how to get past this glitch (or some point of stupidity on my part)

Odd mix of nice photo-realistic atmosphere and cheesy low-res hidden objects. No need to go past the second chapter when you see where this one is headed - in the dumper. Salt in the wound is the hideously linear game play - why the straight jacket?

I'm having a problem with Chapter 6 - Training. I find everything easily, but when I use the gun my yellow meter drops alot due to 'panic' and then when I try to assemble the map my yellow meter keeps dropping because I'm 'nervous' and I end up Game Over by the time I swap 3 pieces of the map.

I only ever take one shot at the target (the dummy), and until the 'panic' makes my yellow meter drop it's at full capacity because I get 'right action' for all the steps before then.

Is this a glitch or something? I've re-done this Chapter a dozen times and the same thing happens each time so I can't move on.

Someone please help, I'm getting frustrated and as much as I would like to finish the game I will scrap it if it's impossible to get to Chapter 7.

[Edit: Did you have a look at the walkthrough for the map? There is a screen shot, that might help you, getting the map fixed faster.
But to be honest, I can't remember, that there was a bar in this level. Is it possible, that you are playing a beta-version of this game (which had this panic bar in all levels, not only a few)? If so, you might consider to download the final version by clicking one of the links, you can find on top in the review. But of course I might be mistaken ~ Kayleigh]

I really enjoyed the atmosphere of this game, but I found the ending a bit disappointing.

I thought that when the blue "Dune"-eyes were displayed people were that kind of possessed/schizophrenic/crazy, and that was going to be the answer.

I used alot of cheats/hints, does anyone know if the ending is different depending on how well you do?

I don't quite like the cash penalty for misclicks as well. It does limit the "exploration" of the game, especially when trying to figure out how some of the items interact.

But I've got to say that the atmosphere is awesome! Kinda reminded me of the Resident Evil post-apocalyptic feel. :)

I've hit got a problem going in chapter 7.
I can find everything fine but when i come to the point of shooting the blowtorch i keep dieing.
Does anyone know why????

The one thing I needed help on you didn't include. Chapter 14 - You don't say where to find the key!! Other than that, good walkthrough though. Too much time on your hands??? haha

Thanks for your nice words about the walkthrough

I like the idea behind the game, but to be quite honest, I was disappointed that it was linear. I felt like maybe there could have been another story branch and ending in there; the one ending included feels a bit too much like, to use terminology from another game, a bad+ ending, I think. But the gameplay wasn't bad at all.

Any game where I can get through to the end of chapter 17, and that with taking a 5 minute paused break because of a phone call in the middle, in my hour demo, is not going to be worth the money. I know that beating the game would take me another hour and a half at MOST.

Maybe it's Ravenhearst syndrome, but I expect pay games to offer EITHER multiple hours of gameplay, OR replay value (or both!). And I don't see either here.

Too bad because the story was pretty good and so was the art.

For chapter 8 - history
I can't find the black markings under the numbers on the access card, could someone please give me the code.

Can someone please tell me what happens at the end? I can only play the web version! Please!