Misplaced items are a common theme in physics puzzles. It seems like you're always either trying to get the candy or get the water, but how about stray noggins? The stitching on Frankenstitch's shoulders is not doing its job: the playful patchwork monster keeps losing his head. Perhaps because it's so perfectly round, the always cheerful Lost Head seems driven by an unstoppable urge star in a its own physics puzzle, so it keeps popping off and dropping into kooky obstacle courses of pulleys and levers, fans and sponges, trampolines and pistons. Now it's up to your deft timing to return head to body in this offbeat and fast-paced game from Alawar Entertainment. 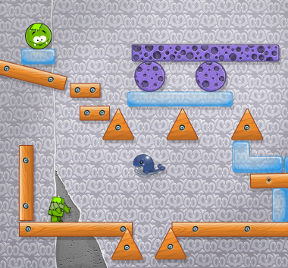 Lost Head is available to you two ways—as a mobile game or a PC download. Going mobile, you can use the multi-touch feature on your tablet to solve certain physics puzzles with greater ease. If you get the download version, you'll need to be a bit quicker and more deft with the mouse as you point and click past obstacles to help Frankenstitch's head reach his body.

The first set of levels are none too difficult but once you enter the chapters with pulleys or fans, you'll need to work out a specific sequence of actions that will spell out success. As you progress, the set-ups become more intricate and difficult to pass, so this there's no shortage of challenge to work your mental muscles. While you can take all the time in the world and overlook the collectibles on your way through, that will only get you one star for your efforts. But future chapters are only unlocked when you gather enough stars. So, if you want to move on to the later levels, you'll need to act fast and grab all the goodies you can along the way to earn three stars on each level.

Lost Head was inspired by a browser game of the same name, and it takes the concept further with more features and levels. Although its appeal doesn't quite reach the same level as Where's My Perry? or Cut the Rope, fans of those games looking for something new should especially enjoy Lost Head. Here the design isn't aiming to wow you with graphics as much as deliver some stand out puzzles for you to solve—and this Lost Head does very well.

NOTE: This game was played and reviewed on an iPad 2. Game was available in the North American market at the time of publication, but may not be available in other territories. Please see individual app market pages for purchasing info.