What do you think... will the world end with a bang or a whimper? And if after the collapse of society was over you found yourself alone... would you even care? As the days ticked by and each one started to bleed into the next... and you had to start to face the reality that you might die by yourself, alone, unmourned... how long would it take for you to start to crack a little? Jasper Byrne's eerie psychological horror adventure Lone Survivor plays like a fever dream and is some of the best surreal storytelling your money can buy.

Long story short; everyone else is dead. Or changed into something where death might be preferable. You are a man who wakes each evening alone in an apartment. He goes out at night because that's when the creatures who used to be human are out in fewer numbers, and he goes everywhere barefoot because they hear you if you wear shoes. He's almost out of supplies, but that's not the real reason he keeps going out night after night. It's because he can't bear the thought of dying alone. Or is there something else, something he isn't quite ready or able to confront, that keeps sending him out there? 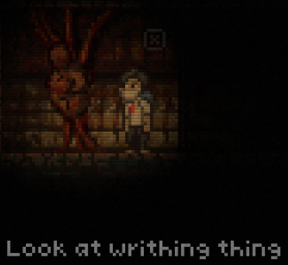 Use the [arrow] keys to move around, and the [X] key to interact with objects. The [spacebar] opens your inventory, and [F] toggles your flashlight on and off. Maps for each area you visit can usually be found nearby the main entry, and you'll want to refer to them often with [M] so you don't get lost. The map, fortunately, keeps track of everything from points of interest to your current location, so it's handier than you might think. You'll also find mirrors throughout the environments that you can use to travel back and forth between the one you last gazed into and your apartment... handy for a quick escape to regroup or take a snooze.

The main enemies you'll encounter (though not the only ones) are tall, spindly, shaky creatures that trundle slowly through the dark halls and will emit loud noises and charge after you if they see you. When you get one, your gun can be pulled out (or holstered) with [C], and you can shoot in front of you with [X], using the up and down [arrow] keys to aim. Of course, ammo is finite (and hey, maybe you don't want to resort to violence), so you'll need to be sneaky if you want to survive. You can hide in certain shadowy places by pressing [X] to hug the wall, place rotting meat to lure the ravenous beasts away, or drop flares that disorient and blind the creatures long enough for you to run past. Don't get too cocky; too many hits and it's game over, and you'll need to reload from the last time you slept. 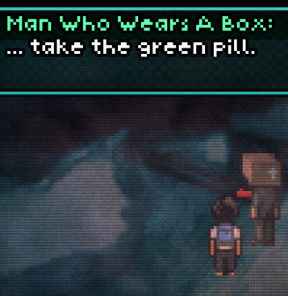 Whenever you need to sleep, it's as simple as traipsing back to your apartment and hopping into bed, but food is usually another matter. There's a limit to how much easily consumable sustenance you can find laying around, like Prawn Chips and Squid on a Stick (extra delicious when picked off of a bloody dirt floor!), and the rest will need to be prepared with the right tools. A can opener to get at fruit salad, for instance, or a kettle to brew water for coffee. Of course, you'll also come across other things you can eat, but whether you should or not is entirely up to you. After all, you might not ordinarily be the sort of person who shoves dirty unidentified pills found on the floor into your mouth, but it's the end of the world. Nobody's around to judge you. Right... ?

Analysis: Strange, dark, unsettling, and more than a little weird, Lone Survivor is a pretty intense experience. It can definitely be a little disorienting at first, and that never really goes away. You're meant to feel off-kilter, as though something isn't right (you know, aside from the whole "humanity is doomed" thing), and you'll begin to find meaning and subtext in all your interactions and the places you visit that shine some light on exactly what's going on. Although the otherwise comely pixel visuals can sometimes make it difficult to tell what you're looking at, the game is, on the whole, extremely well presented with a stellar original soundtrack to boot. While you might feel like the game is taking some stylistic cues from titles like Silent Hill, the more you play, the more Lone Survivor feels like its own beast. The surreal approach to storytelling makes it feel a lot more cerebral than your typical "RAWR AIEEEE BLOOD" horror game, and if you have the patience necessary to survive, you'll probably enjoy every second of it. 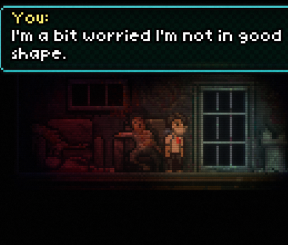 The game slyly suggests via a note you find early on that you avoid combat, and you're probably going to want to because you stink at it. It's slow, clunky, and you can't turn around when you've got your gun readied. Lone Survivor doesn't do a whole lot of handholding, and in most cases you're simply left to figure out what you should and shouldn't do through trial and error. This isn't necessarily a bad thing; the feelings of uncertainty and disorientation coupled with the fear of failure nicely mirror the protagonist's own state of mind. You might also say the combat makes sense given the protagonist's shaky physical and mental well-being and lack of training, sort of like Boy Blunder Harry Mason in the original Silent Hill. Fortunately, the game does feel like it rewards patience and stealth over the Leroy Jenkins approach anytime, and carefully picking your way through with flares and sneakery is both more rewarding and arguably more realistic.

On the whole, though, as rewarding and intriguing as exploring and finding out tidbits of story and meaning can be, there are some minor annoyances. Your flashlight apparently takes the world's worst batteries that degrade at a shocking pace, and the constant nagging for food feels likewise unreasonable unless you're a cartoon skeleton and all the food just keeps comically spilling out from your ribs the instant you eat it. Likewise, while also realistic, the fact that opening your inventory doesn't pause the game can lead to a few infuriating deaths as something chews your face off while you frantically look for a flare amidst all the cans of pickles, espresso, and stuffed kittens.

While it might take a while to get the hang of things, however, it's definitely worth the effort. Lone Survivor isn't a particularly long game compared to other adventure titles, though the multiple endings that depend on your choices and actions do give it replayability. It's not necessarily what I would call scary in the way we've come to expect from games... there's less of an attempt to make you jump (although the monsters can definitely be frightening), and more of one to get under your skin, which is easily where it succeeds. It's a challenging game, but also an emotional and even deeply unnerving one that will reward persistent, patient players with a complex and striking experience. At about the cost of a movie ticket and infinitely more engaging, Lone Survivor makes up for its missteps by providing a unique and deliciously creepy horror adventure that's well worth checking out the demo for

Windows:
Play the demo Get the full version

Mac OS X:
Play the demo Get the full version

Wow, this is cool! I haven't played for very long, but some of the background ambiance is the same as another very creepy game,

When I heard the sounds I recognized, I nearly screamed. Props for making such a scary experience.

I got it and it's fantastic. Also, why is the reviewer using the inventory to use flares, and complaining about the lack of hotkeys when flares and other items have hotkeys? (It shows you in the commands list in your bedroom. Ssshhh, secret.)

Is the demo supposed to end so abruptly when getting to your first goal? I get there, get the item that the girl wants, I talk to her, then the game stopped receiving input, and nothing else happens.

No, that is a bug I guess (didn't happen to me, though) though it does end very, very shortly thereafter.