People, there are just some things you don't let loved ones do. Drink Red Bull, watch The Real Housewives of Terrible People, and run off to snow-covered, desolate magic mountains alone while offering up the vaguest possible explanation for doing so. In 4 Friends Games' hidden-object adventure Living Legends: Ice Rose, your beloved Edward has been missing for some time after traipsing off to Rosemont, a town that was buried in a blizzard that left what townsfolk who didn't flee in a "sleep state", and now that the police have given up looking for him, it's up to you to track him down. Of course, the chances are slim that Edward has either stumbled upon Liam Neeson and is helping him defeat some wolves in hand-to-hand combat, or kicking back in a ski lodge with some hot chocolate. Guess who gets to thwart an ancient evil homewrecker and save the world? 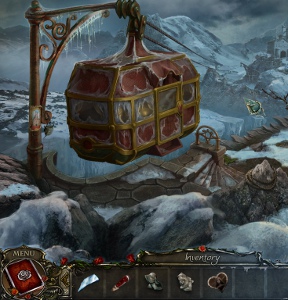 The game offers three flavours of difficulty that change how much hand-holding (hints, sparklies) you'll encounter. It turns out that the evil force who has spirited away dearest Edward at least want you to have a sporting chance of thwarting their schemes, so rather than, say, surround the entire village of Rosemont in a wall of impenetrable ice they've decided to leave a trail of easily assembled clues and puzzle mechanisms for you to solve. The few townspeople remaining in Rosemont are all frozen solid, but that doesn't necessarily mean that they can't help you if you're willing to give them help in return. But, hey, as long as you have the hint and skip functions for when you get stuck, what's a little "combat a malicious evil ice witchery" between friends?

Analysis: If you get a vague Dire Grove vibe from playing this, you're not the only one, and that's not necessarily a bad thing. It's sort of like a more Disney-esque interpretation of the concept. Ice Rose is a beautiful game, and does a great job of infusing that magical atmosphere that makes these types of titles such excellent evening kick-back fare. The environments are gorgeous, character design is pretty solid (albeit silent, which makes the mouth movements odd), and the soundtrack knows when to kick in and when to fade away. It's not the most original concept in the world, but it doesn't have to be. If you like your games magical and entertaining over scary and suspenseful, then Living Legends: Ice Rose might be right up your proverbial alley if you're willing to look past the occasionally goofy writing. 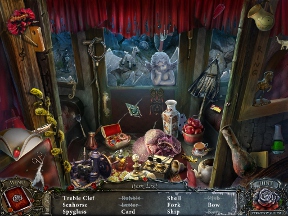 Gameplay is about what you'd expect, solving puzzles and tracking down items, though thankfully the latter doesn't really stray into the illogical. Some of the obstacles are, however, a little dumb. Do you really need to track down a key to get past a waist-high gate? Do I need to play a little matching game to get said key when it's the only key with a big ornate top on it? You need to hunt down something to tie back those shabby, frayed cloth curtains before you can pass through them? Really? It's not what I would call a deal-breaker, but it did wring a derisive snort out of me a few times. If you don't like an overabundance of hidden-object scenes, the amount in Ice Rose and how often they're repeated might put you off. They are, fortunately, clean and well designed, and the same can be said for most of the puzzles you'll encounter.

While the game starts off fairly easy, it does possess a bit of a difficulty curve the farther you go, although chances are you still won't find it much of a challenge. It's not that the game is deliberately easy, more it doesn't really offer anything you won't have seen before in other games and seems to focus on being lovely and approachable. I spent around four hours on the game, which may mean that players who value a lot of bang for their buck should try the demo first. Living Legends: Ice Rose is a familiar but comely game with enough style and intrigue to make it worth spending some time with. Fans of fairytale adventure will like the premise and stunning presentation, and if you want a genuinely casual and relaxing game, Living Legends: Ice Rose is well worth checking out.

Getting the Hammer Handle

Getting into the Hotel

Getting the Code Plate

Getting the Third Figurine

Getting the Bundled Heart

Getting the Blue Rose

Getting the Train Ticket

Getting the Gondola to Start

Getting a Flower Token

Getting One Green Eye

Getting the Gold Key

Getting the Red Feather

Getting the Wax Rose

Getting the Hammer Handle

Getting into the Hotel

Getting the Code Plate

Getting the Third Figurine

Getting the Bundled Heart

Getting the Blue Rose

Getting the Train Ticket

Getting the Gondola to Start

Getting a Flower Token

Getting One Green Eye

Getting the Gold Key

Getting the Red Feather

Getting the Wax Rose