Incredible Express smoothly blends a time management game with a track-switching arcade experience. Think of it as a cross between Youda Farmer and Mystic Mine with a few elements from Farm Frenzy thrown into the mix. A young entrepreneur named Maria has inherited a shabby steam locomotive and discovers her services are in demand. Lay sections of track and control the direction your train runs to make pick-ups and deliveries as efficiently as you can! 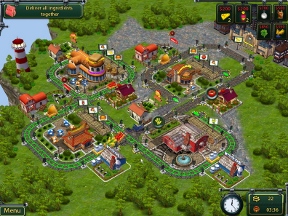 Running a train isn't easy work, and it seems like every farmer in town wants you to haul their goods. Fortunately it's fairly simple to move about the village, as rails are placed in convenient locations right outside the farmers' shops. The top of the screen shows how many of which items you need to deliver to the station. The train moves on its own and automatically attaches wagons filled with goods when it touches them. Grab the wagons, then make your way back to the station to unload. At first, you can only carry two carts at once, so you have to get creative with which paths you take and what order you nab the goods.

Controlling the train is a simple matter of hitting track switches to change paths and lighting stop signals to reverse direction. The train is constantly moving on its own, and if you don't keep a close eye on its next few destinations, you'll waste valuable delivery time. Most tracks are circular, and if the train hits a dead end, it reverses on its own, so you don't have to worry about crashing, just wasting time!

Adding a layer of strategy are goods that need to be manufactured before they can be delivered. If ketchup is ordered, for example, you'll need to bring by two carts of tomatoes to the factory. The happy ketchup workers do their thing and set out their cart when they're finished. All you have to do is take it to the station! Adding these manufacturing steps places extreme importance on which carts you take and in which order. If you don't think your path out beforehand, you'll waste most of your time pointlessly driving around the tracks. 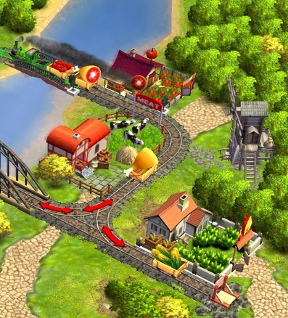 Analysis: Incredible Express is all about managing your time, more so than most "time management" games out there today. Each move you make, each switch you activate can add precious seconds to your delivery time, and once you make a few rounds to gather all the goods you need, that can practically ruin your reputation! Fortunately the game doesn't place too much pressure on you to get things right the first time around, so ease into the experience, learn the ropes, and you'll be directing train traffic like an all-star.

Incredible Express does a great job mixing casual genres into a new experience, but it falls short in one key area: presentation. The introduction to the game features some terrible voice acting with even worse dialogue. Do yourself a massive favor and skip past it as fast as you can, the story is banal, anyway. Some of the in-game visuals look a bit rough around the edges, too, taking away some of the polished look we love seeing in games nowadays.

Haven't played this; don't want to. Came in to suggest OpenTTD although that's far from "casual" game play. Well, it can be casual after you know how to play it. Works on Windows and Linux, don't know about Mac.

So you think the voice acting was terrible? LoL, i loved both the voice and the story much better than in 99% casual downloadable games i've tried (and i have tried quite a number). Though of course i can't be objective, i'm a girl and i adore trains and train engineers, this game's perfectly me-oriented. Some levels are darn hard and that's soooo right. Wish it was more popular to guarantee a sequel or level pack at least :)