Revealing a few more of the 1000 doors offered in the title of the series, House of 1000 Doors: The Palm of Zoroaster drops you back in said house to put you through another series of puzzles and adventure quests as the indomitable author/spirit soother, Kate. Offering the same quality of product as the previous installment, Alawar has brought us another great hidden object/adventure hybrid, just in a more sinister, unsettled portrayal of the house. 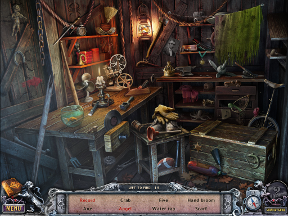 Kate finds herself dropped in the strange yet familiar place in the House of 1000 Doors, but now, something is different. It is no longer in its immaculate condition filled to the brim with rooms that one could describe as 'stuffy'. The house is now under attack by evil fire spirits which plague not only itself, but also many of the locations around the world that it is connected to. Right the destruction around you and squash the evil emanating from the Palm of Zoroaster to once again make a safe haven of the house.

Having the same game mechanics as Family Secrets, use your mouse to move through the locations and interact with the scene. Aside from the normal cursor, the mouse changes to three other forms to let you know how you can use a particular area/object. There's the regular cursor with a spinning tail, which means this is an area to use another object, the hand, which indicates the ability to pick up an object (whether to put in your inventory or to use somewhere else on screen), and the pointing arrow which will take you to a new place all together. Along with the first two cursors mentioned, hidden-object scenes also have the magnifying glass which will open a subscreen to search through. The scenes themselves are fairly interactive, having several objects that need to be revealed or put together in some way. 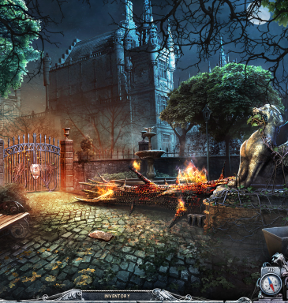 Analysis: Alawar has put together another great tale of the House of 1000 Doors. Keeping the backstory and gameplay that worked so well in Family Secrets, they expand upon it with a darker feel to this familiar setting. As before, this is a game where you can play around with the supernatural without the worry of jump scares or overly frightening scenery. It sticks to the formula that made the first game so enjoyable, but sometimes it's so close, The Palm of Zoroaster feels more like an expansion rather than a true sequel.

It's great to see this title keep up the high quality the series started in, and the addition of using the map to transport to other locations is much appreciated. Let this be a lesson to adventure game developers out there (hybrid or otherwise): lots of backtracking does not equal fun, give players some way to instantly transport to where they want to go! It's also nice to see that they've kept indicators on the map to tell you which locations you're able to perform actions in. While you still have to figure out what those actions are, coupled with the teleportation ability, this feature makes for a smooth playing experience.

In the collector's edition you'll experience about an extra hour and a half of fun, plus the added benefit of carrying the story out to a more explained ending (cliffhangers, why?). And if you can also help out a resident of the house, all the better! House of 1000 Doors: The Palm of Zoroaster provides hours of hidden object and adventuring fun in a well told and compelling story. When the ghosts of a supernatural story are in need of a savior, you can't help but want to right the wrongs that stopped them from resting in peace.

Getting the Car to Start

Getting into the Garden

Getting the First Heiroglyph

Getting the Burning Torch

Getting Past the Venus Fly Trap

Decoding the Text on the Slab

Getting the Eyedropper with Oil

Getting the Dream Powder Recipe

Getting the Dream Powder

Getting the Star of David

Getting the Madagascar Key

Sailing to the Pirate Ship

Getting the Fireball to the Organ

Getting the Car to Start

Getting into the Garden

Getting the First Heiroglyph

Getting the Burning Torch

Getting Past the Venus Fly Trap

Decoding the Text on the Slab

Getting the Eyedropper with Oil

Getting the Dream Powder Recipe

Getting the Dream Powder

Getting the Star of David

Getting the Madagascar Key

Sailing to the Pirate Ship

Getting the Fireball to the Organ