It's always seemed inefficient to trap mammals inside robots. It didn't work for Dr. Robotnik, which should have been a lesson to everyone. Nevertheless, in Horn, an epic third person RPG adventure from Phosphor Games, the robots themselves decided to start converting humans into their own kind. While its a bit unclear why that happened, its up to you, an amnesiac blacksmith's apprentice, to sort it all out. 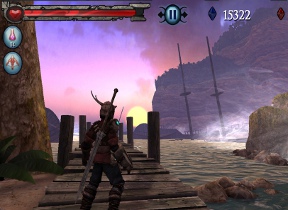 Somewhat similar to the later Legend of Zelda games in basic layout, Horn is an expansive game with plenty of exploring to do. Tapping the screen allows you to interact with nearby objects as well as move around the environment. Most items that need your attention are marked by icons, so your path is usually easy enough to follow. Additional controls are made available as you jump large gaps or navigate narrow ledges. Once a battle starts, swiping prompts Horn to slash in that direction with his sword. Roll buttons allow you to dodge enemy blows or get in position for damaging attacks against a weak point. Potions and stun bombs round out your arsenal, although these are expensive to resupply, and are best used sparingly. And before you think it, yes, the battles are a bit reminiscent of Infinity Blade 2. Which is a good thing.

Crafting is also a part of Horn, although it's little more than an upgrades shop instead of a proper crafting system. Blueprints for new weapons need to be found in the world before anything can be crafted, and crafting itself costs cores and pygite, which also must be collected. There's an in-app purchasing option for boosting your crafting currencies, but it's totally optional and really only put there for the lazy. If you have some patience you'll find plenty of cores on your own, and if you want more, there's an arena created solely for earning cores via combat. 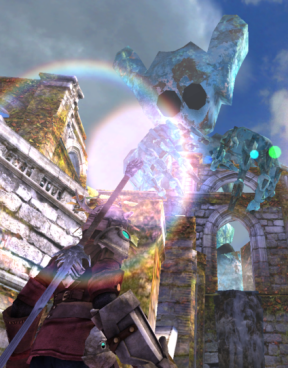 Analysis: There's a lot that Horn does very well, not to mention a lot it does well on the mobile platform. The 3D graphics alone are worth a mention, and while most locations look similar early on, once the sun comes out the drab ruins almost sparkle in the warm light. Naturally, more locations open up as you progress, and they're great things to behold when you finally have access. Exploration is a fun part of any well made RPG, and there are plenty of secrets to find in this game. A downside is that most hidden areas rarely contain anything other than a chest of pygite, but saving up for late-game upgrades is never a bad idea.

Horn can make it too obvious where the path forward is hidden. In some areas the level design is fantastic and you're led to your objective without realizing the game is gently pushing you along. Other times a trail of tool tips precedes you, and too often you just follow them to the stage end. Even the secrets are marked clearly. The advantage is that it's hard to get lost, but you never feel quite like you're exploring by yourself. That said, many players will appreciate the simplicity, especially as the camera can make navigation awkward.

Dialogue is also a downfall of this otherwise lovely game. It seems to be aiming for comedy, but conversations are drawn out rather than punchy. Even the best visual joke is deployed so early that the effect is lost. Additionally, reserved and unenthusiastic voice acting leaves the impression of of a low budget sitcom with the laugh track removed. The grand sense of progress usually distracts you from these shortcomings, as collecting blueprints, taking down huge enemies, or even just picking off the small flying enemies to earn extra cores feels like another step of the adventure. No matter how flat the story is, seeing it unfold as you play gives meaning to your journey.

For those looking for an intricate, moving plot, Horn may not be quite what you want. But everything else comes together to create a grand experience well worth the price of admission. Horn is easily one of the top 3D RPGs on mobile devices right now. Grab your sword, hero, and prepare to take back your land from the Pygon. Because, well, nobody else is around to do the dirty work!