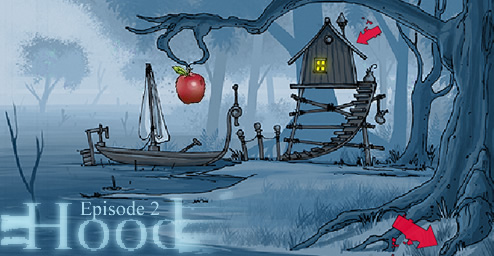 Revisit a small town in the middle of nowhere teeming with mystery and secrets to uncover in Hood: Episode 2, the second installment in the point-and-click adventure series by Alice is Dead co-creator, Hyptosis.

Hood: Episode 2 is story-driven and atmospheric, continuing where Hood: Episode 1 left off. While searching the woods for a lost girl (auburn hair, 17-ish, red cloak), you come across a peculiar metal ship. Like something the cat dragged in from a murky swamp. And that's not the only strange encounter in store for you. In this chapter of the series, your main focus is unlocking the secrets of the large tin machine—interrogate the local inhabitants and face unfriendly spirits who cast disparaging labels ("murderer!") upon you in your quest for answers.

Although answers in the case can be obtuse or riddled with implication, moving around in Episode 2 is straight-forward and easy: just click on the red arrows to navigate your way around the town. You might catch yourself hammering some distraught imp's head repeatedly only to come up with empty hands for the dozenth time, there's no need (unless you think his tortured "Arww!" amusing); requisite items are rather obvious when they're located. If you can't pick it up or it's not presented to you, it's probable that you aren't supposed to have it yet. The inventory menu is also conveniently located at the bottom of the screen making using an object a simple matter of highlighting it.

While the puzzle solving aspect of the game is certainly gratifying, the greatest appeal of Hood: Episode 2 is in discovery and narrative scaffolding. Poking a tree with a pumpkin, for no other reason than to reveal some ironic or irreverent comment, can be addicting. As you continue to explore, the tainted allegory unfolds before you. Then, at the moment of revelation, a new twist. What happens next? Look forward to Episode 3 when that answer might soon be revealed.

Opening Up The Fish

Opening Up The Fish

I feel like these games were written by two different people, one who is dedicated to maintaining the dark nature of the series by using more formal language, and one who continuously ruins the atmosphere by saying things like "super important."

Good game. But like with the Alice series the second episode seemed too short (especially compared to the first episode).

Does anyone know what the blue writing that quickly flashes across the screen every now and then says?

@sgtdroopy - it's true. You know, I think there's something about the nature of making adventure games that causes the creator to be unable to stop himself from adding funny flavor text, regardless of the game's intended tone.

Still, I continue to enjoy the unfolding story, silliness aside

What was with the Alice is Dead reference about breaking the light? Use your hammer on the lamp in the upper right corner inside the fish.

Still, the game's good despite its efforts to ruin its own atmosphere.

Huh, these games always have me split. The atmosphere is nice (if you disregard the immersion breaking smileys and lines), and the graphics are really nice.

However, the gameplay is flawed. There were 2 relatively logical puzzles in there

First, opening the panel with the book nearby. Pattern association.

Second, fixing the fuse. The knife is made of metal, and thus it's conductive and thus you can tie tem together. Problem seen, logical solution found, fun had.

. The other 3 puzzles were just utterly random to me, and I mostly found them because I fell back into the bad adventure pattern: Mash every item on every other item.

I used the apple on the imp and nothing happened. Thus, I discarded the apple as candy entirely. This left me without any visible puzzle until I randomly combined knife and apple. I just don't see any good reason to require this combination. Just give him the apple and be done with it?

Second, the thing pointing to swamp water. It points to swamp water in some location and I have to click on the swamp water on an entirely different location (3 screens away, not graphically connected, so entirely unrelated). I mostly solved this because the only other textual occurence of "swamp water" was over there. That's a pretty bad and unimmersed way of reasoning in my opinion.

Third, the hammer-spirit-interaction doesn't make much sense to me either. I assumed that the hammer is a tool that lets me communicate with this thing. Why should giving that away be the solution to the puzzle? I wouldn't be able to negotiate or enforce my reward.

@SkylerF
The creator of this worked on Alice is Dead. There's a reference in the first one too, if I'm not mistaken.

every puzzle had a set of clues in the dialogues that led you to the solutions, although some were tough and you really had to think about what you were being told.

When you click on the bell in the background in the hut (from Alice, the bell you have to carry around through each game):

"That is a great looking bell! I'd love to carry it around a whole bunch."

Also the hat there is another reference.

According to the user Funnykidsc on Kongregate, the backward blue text that flashes occasionally reads "She has no soul, do not trust her."