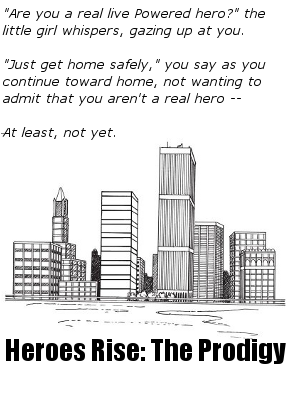 When almost everyone is a superhero, it can be hard to get a chance to shine, even if you're packing some powers yourself. As a nobody struggling to make ends meet in Millennia City, you've always dreamed of flying with the Legends, but you've never really been given the opportunity to make a name for yourself... until now. In Heroes Rise: The Prodigy, a new text-based RPG from Choice of Games and writer Zachary Sergi, control the actions and fate of an up-and-coming superhero... yourself! Claw your way to the top by harnessing your abilities and making a name for yourself, become embroiled in bitter rivalries with other heroes and villains, find romance, mentor a side-kick, and a whole lot more.

As you play, the game presents you with multiple choices for everything from combat scenarios to social interactions... just pick the one that best suits the character you're trying to play. The decisions you make alter not only the course of the narrative and how people perceive you, but your stats as well, which can be viewed at any time by hitting the "show stats" button above the text. Once you make a choice, there's no going back since you can only choose to restart the entire game rather than skip back to an earlier chapter, so give a little thought to each situation before you take the plunge. If you run out of either Health or Power, you'll die, and you might want to keep an eye on your funds as well as your friends... and enemies.

Analysis: If you love high camp plot twists, corny superhero names, and have always wished it were socially acceptable to run around the city at night in spandex that leaves little to the imagination, then Heroes Rise: The Prodigy will be right up your alley. Complete with Aunt May style maternal figurehead, it delivers a lengthy and surprisingly action-packed tale with memorable characters, dramatic moments, and some very cool scenes to play your part in. Some of the scenes can be a little eye-rollingly corny, which is kind of par for the course in, y'know, comics, but the game still manages to tell a very cool story in a unique universe. There are even a few unexpected plot twists you'll have to contend with where you might have to make some choices that sting a little if you want to uphold your personal values.

The downside is that the choices you're given often feel extremely limited, which is kind of ironic when you consider the outfit publishing the game. You're often only given two or three options for a situation, and sometimes not enough information to ever really feel like you're making an informed decision, which is great news for those of you wishing to role play as Cross Your Fingers and Hope For the Best Man. Which, by the way, The Prodigy has a very "on rails" feel to it that might feel too constrictive for some players, but also allows it to tell a more focused, interesting story that a narrative that needed to account for more variables might not have been able to deliver.

For all these minor quibbles, however, Heroes Rise: The Prodigy is still really impressive. It's a long, hefty heroe's arc with a ton of replayability that is heavy on storytelling and flashy drama. There's even some fairly big hinting for an inevitable sequel down the line where you can hopefully continue to claw your way to the top of the Powered Pack. Action-packed, engrossing, and just plain fun, The Prodigy is a great piece of choose-your-own-adventure style gaming that is well worth making a date with.

Gosh, that was tantalising! I only hope it becomes available on the iTunes Store soon, I was doing really well- got a reward for reaching the highest possible hero level.

Still, looks like it's another incredible instalment, and I look forward to playing the full version with bated breath.

It's got an infuriating amount of pointless infodumps about the world and technology, but aside from this it looks pretty interesting. Shame that it ends so quickly.

a bisexual teen superhero with a me-chip AI of a sassy, roller-blading drag queen that I named Grommett.

ohmygod I just finished playing and I LOVED it - and I completely agree with Akarroa's comment. I have played IF on my pc before, but not on my phone and already I can see that I'll be downloading more. I can't wait to play again!

I don't like this one as much as the ones that came before it. It doesn't seem to measure up to the standard of the other games. Still fun, but I'm just not that keen to find out what happens next.

* Things feel very one-dimensional, like... a comic book. I don't feel like I have any real control over the story. I don't feel that my character particularly represents me, in the same way that I did for, say, Choice of the Vampire.
* The game was really quick and blunt about asking me to define my sexual orientation. I appreciate being given the choice but the other games handled it better IMO.

So, in order to play the full game, you have to own either an Amazon Kindle or an android phone?
Darn...

You can also purchase it for your computer's desktop from the Chrome Store (will require a quick download of Google chrome).

iTunes release has been temporarily delayed, but will be available for iPhones/iPads shortly!

So I ended up buying the game for Android, and it's actually pretty good as a whole. I think the demo ended early without doing it justice. I can definitely recommend it now despite what I said earlier.

I've been trying to get 100 Legend level but can manage about 70 at most. Has anyone done it yet?

This is the first game reviewed on JIG that I bought. $2.99 price tag well worth it.

Sure, it's mostly linear (though I'm about to replay with different options to try to find different twists).

Black Magic's power source (though you could make the case that this was predictable).

Sparrow's fate. (Does this change depending on the sidekick? On who you choose to save?)