MythPeople returns with another gorgeous puzzle game that bends the rules at all the right places. Heroes of Kalevala is a match-3 puzzle game infused with a village building sim. This means you get to swap tiles in a MythPeople's traditionally dramatic manner and earn gold to build a city with. As you play, you unlock new buildings for your town and discover new power-ups, creating that "just one more level" feeling we love in our casual games! 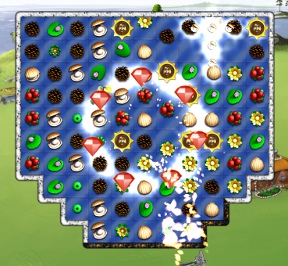 For the uninitiated, the Kalevala is an epic poem and is one of the most significant works of Finnish literature. It begins with the Finnish creation myth and follows several characters and deities through the trials of life. Pieces of the Heroes of Kalevala story were inspired by this epic poem, and as you begin, a drought is plaguing the land and you are sent out to build a new world for your people to inhabit.

The crux of Heroes of Kalavala's gameplay pivots around the match-3 board which functions just like any other tile-swapper. Click and drag pieces to move them, the goal being to make matches of three or more to remove pale-colored tiles from the grid. Once the board is blue, you move on to the next level. A crow circles the perimeter of the playing field, burning the border and snatching gems that line the tiles. If the crow completes its journey, you must repeat the level, so swap as fast as you can!

The matching element is spiced up in MythPeople's typical manner by introducing some epic power-ups. In this case, keeping with the Kalevala theme, you earn the help of mythical Finnish heroes who will unleash their powers when you match their tiles on the screen. Each ability is different, and you can only use one hero at a time, adding a bit of strategy to your choices. Locked tiles, ice blocks, and stones also stand in your way, each of which needs to be dealt with by making matches nearby. You'll also discover bombs by pairing up four or more gems in a match, creating quite a bit of dynamism on the screen.

But the puzzle game is only the beginning. You earn cash for your performance in each level, and this money goes towards a great cause: buying things for your village. New structures for housing people, items to keep everyone happy, practical upgrades to make sure the villagers survive, and a few just-for-fun pieces can all be purchased at the store and placed wherever you like on the screen. The village serves as a backdrop for each match-3 level, and you can rearrange objects at your leisure, which is much more entertaining than it should be. 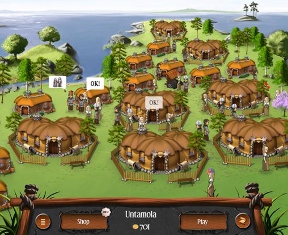 Analysis: MythPeople has impressed me many times in the past with its style of games. Each release, from Miriel the Magical Merchant to Dragon Portals and Azkend, utilizes a familiar formula to its best, then changes the rules just slightly and adds a few extras to make it more entertaining. You never have a hard time learning to play these games, as they manage to hook you right from the start, and there's always enough content and originality to keep you running from beginning to end.

It's also impossible to discuss a MythPeople game without saying a few words about how gorgeous it is. Heroes of Kalevala won't stun you with its beauty like some games, but the crisp tile pieces and detailed animations will catch your eye, and some of the hero effects are especially fun to watch.

Don't expect an easy time with Heroes of Kalevala. The difficulty becomes apparent after only a dozen levels or so, with so many obstacles blocking the falling tiles' path and that cursed crow circling at such a speed. Choosing the right hero for each level is important, as each god has a unique power that works better on some level shapes and layouts. In the end, however, it all comes down to your match-3 skills. Hope they're up to par!

Heroes of Kalevala is a great blend of puzzle game matching and simulation gaming that sticks strongly to the former while adding the latter as a side bonus. If you can handle the increased difficulty, you won't have a hard time enjoying every minute of this game.

I bought this for iPad last night and played it for hours. Am really enjoying it. There's a lot of variety in the match-3 gameplay that keeps things interesting. And the unlockables in the village sim part provide a constant stream of rewards to keep you coming back for more.

And it's gorgeous on the large iPad screen.

I have played about half an hour of the free hour, and am considering whether to get this for my iPhone. I enjoy Puzzle Quest very much, it's one of those games I keep coming back to, but the iPhone version of that game is slightly marred by the fact that it's a little too easy to tap in the wrong place; it's pretty simple to tap in the right place as long as you concentrate, but every now and again I still slip which can get rather annoying. Heroes of Kalevala seems to have some playing boards that are rather larger than those you get in Puzzle Quest - or am I wrong there? That would mean smaller boards on the iphone screen, in addition to the time limit (which you only get in some specific contexts in PQ), and that's not a good combination when the risk of misclicking is greater.

It does seem like a really fun game, which I think I'd enjoy a lot. The Kalevala connection is somewhat superficial as far as I have seen so far, but it's an excellent basis for a game. (Did you know that JRR Tolkien learnt Finnish in order to read the Kalevala? Then he based one of his Elvish languages on Finnish. I know only about a dozen Finnish words, but the Kalevala is fortunately available in translation for those of us who are not as enthusiastic as JRRT was.)

Does anyone know what the hints are at the beginning of the levels? Mine loads too fast, and all I get is "...best on levels with... or... " I miss all the good bits!

Fortunately my machine is less efficient, Lori Jo. The following is not necessarily verbatim, often with (my comments).

Ahti is good for clearing tiles at the bottom of the board. (D'uh!)

Ilmarinen is good for vertical columns of stones and/or tar. (Oh? Didn't try that yet. Will next time I get a chance.)

Wainamoinen is a good choice on levels that have a lot of locks or locked bombs, but weak against tar and boulders. (I suppose because he doesn't clear either directly, 'cause they don't match anything.)

Tapiola's Lemminkainen is surprisingly good for "some of" the hardest tar levels. (Tapiola means Realm of Tapio. Should that be "Tapio OR Lemminkainen ...."? Tapio does work well, and I like to see the roots spread. And I didn't see him mentioned otherwise. Not that I saw Wellamo, Ukko, or Tuoni recommended either.)

You don't need to clear out boulders, ice, or tar if the tiles under them are blue.

Sometimes you can block away the progress of tar by playing carefully. (Well, one would hope!)

Some heroes might appear weaker than others, but pieces for them appear more often.

No hero can do anything about locked bomb pieces. You have to explode a normal bomb next to one. (And then they usually chain-react for that side of the board or sometimes the whole board.)

Always select the best hero for each level. (Triple d'uh, with Cool Whip on top.)

(And just for completeness:) Welcome to Kalevala.

(There may be others, but that's what I had when I stopped.)