Do you have what it takes to be a real Hero Mage? This turn-based, tactical strategy game from D20 Studios brings the feel of tabletop RPG combat to your mobile device or browser. Take control of a small group of heroes on their battle-ridden path to victory over darkness in the realm of Papillion! 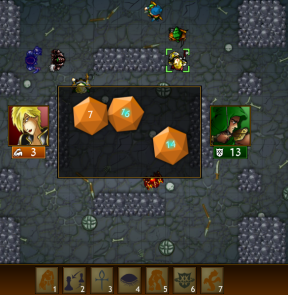 You begin each battle with three units: a Mage, and two Guardians. The Mage unit is capable of casting spells and summoning monsters to help you fight. The Guardians are less gifted warriors such as barbarians, rogues, and paladins, but each has unique abilities and benefits. You and your opponents take turns moving, casting spells, and attacking on a grid map until only one team remains.

Combat takes inspiration from the d20 system: 20-sided dice are rolled to represent attacks. If the result beats the opponent's defense rating, damage is dealt. Stronger units get to roll more dice for each attack. Mage units can also cast spells from five schools or magic to damage, buff, or debuff units, and otherwise change the playing field. Spells are represented by cards that are drawn each turn and require mana to play.

Fans of tabletop games like Dungeons & Dragons, Mage Knight, or Magic: The Gathering will find the gameplay mechanics familiar and compelling. Likewise, turn-based tactics fans won't be disappointed. The base game includes six classes of units and 50 spells, and expansion packs including six other heroes are available for purchase. Expansions are tied to a universal username, so it doesn't matter if you're at your computer or on your mobile device: the content will always be available to you. The learning curve is a little steep due to the amount of content, but the tutorial is thorough and after some practice it's not too difficult to develop more complex strategies.

The fantasy setting is well represented in both the game's content and art style. The simulation of the tabletop gaming atmosphere is so true that publisher Game Salute has signed on to create an actual board game! Hero Mages includes six story-driven tutorial levels, but gameplay really shines in multiplayer and quick matches. Battles can be either random or customized with different heroes, maps, and rules. The multiplayer is cross-platform, so it's more likely that players will be online, but the community is still growing.

Hero Mages provides a massive amount of tactical options and exciting combat situations, and D20 Studios has already started releasing new content. This one is sure to become a favorite for fantasy fans and strategists alike.

NOTE: This game was played and reviewed on a NOOK Tablet. Game was available in the North American market at the time of publication, but may not be available in other territories. Please see individual app market pages for purchasing info.