You know, while I'm all for helping people out, there are times when I can't help but think they bring trouble on themselves... like buying a hotel rumoured to be haunted by evil spirits, and then being surprised when it is totally haunted with evil spirits up the wazoo. There has to be some sort of personal culpability there. In Elephant Games' hidden-object adventure Haunted Hotel: Ancient Bane, you've been called to help out the owner of one such hotel whose guests have been going missing. I'm not sure what you expect when your hotel has demon faces on the gates, enough sinister angel statuary to make Matt Smith hesitate, and twice as many elaborate puzzle locks as bathrooms, but whatever floats your boat. When you arrive with your detective friend James, however, you discover the hotel owner, a Mr Shadowy to complete your run of Bad Omen Bingo, is acting very strangely indeed, and you'll need to solve puzzles, rummage through hidden-object scenes, and thwart an ancient curse if this place ever has a hope of getting a better rating on Yelp. Comfortable beds and complimentary breakfast, unspeakable evil used my body to construct the end of the world, three out of five stars. 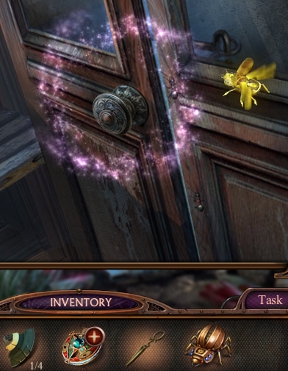 This game gives you a tiny flying robotic scarab sidekick. I would give it a million mushrooms for that alone if I could, because I grew up watching Clash of the Titans and I have always wanted my own Bubo, but alas, I need to be professional. This, however, sort of sets the tone for the gameplay in general. It's about what you'd expect from the genre, with item puzzles and adventuring, but all of it is bundled in an appealing mystical style. There's a lot of emphasis here on assembling ancient magical doo-dads to accomplish things, and the emphasis on mystical contraptions makes even simple tasks and puzzles enjoyable. Floating killer cutlery! Possessed people popping out of walls! Sucking evil mist into vacuum cleaners! Sinister stuffed bunnies! It makes the mundane entertaining, and takes the sting out of all the backtracking you'll be doing. The puzzles themselves tend to fall back too often on matching or swapping things to make matches, but there also isn't really any illogical gameplay to be found. When you find an item, its use always makes sense. There are, however, a few frustrating instances of unclear direction, such as being told you need to "unscrew" something when what you really need is a hand-crank, or being told to look for "tablets" that might more accurately be called "pills". At least your detective friend James actually helps by finding items of use to you, which makes him ten times more useful than the Dark Tales series' Detective Dupin. Then again, you might actually need to be a mannequin to be less useful than Dupin. Then again, you can use a mannequin to prop a door open or weigh down papers, soooooo... 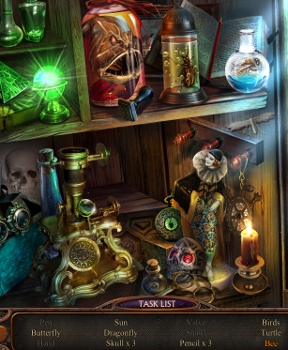 The game leans more heavily on puzzle-solving and adventuring than it does digging around in hidden-object scenes and is stronger for it, though the scenes it does make you play are usually so beautifully illustrated that you won't mind. In fact, Haunted Hotel: Ancient Bane might just be Elephant Games' most gorgeous title to date. Every area and character feels alive with detail and animation, and the voice work is some of the best you'll find in a casual game. This helps elevate the story considerably, hooking you in with cutscenes and clues that hint our foreshadow-y named hotel buyer may have bitten off more than he can chew. As you explore, it seems like he might have intended to turn the place into a campy tourist trap, but then why did he suddenly begin inviting all these specific people with very specific skills? The average player will likely spend around four hours finding out, not including the bonus chapter in the Collector's Edition, and high production values across the board make Haunted Hotel: Ancient Bane captivating every step of the way. Though it doesn't do anything innovating, Ancient Bane provides some of the most consistently entertaining and intriguing hours in a casual game in a good long while. Try the demo and see for yourself, but if you're looking for an adventure with just the right amount of creeps and heavy mysticism, Haunted Hotel: Ancient Bane is easily recommended. Just... maybe not for any bed and breakfasting... at least not until they fix that whole "unspeakable enslaving evil lurking in the walls" thing.