The play's the thing, as you might have heard. And in this case, the play's thing is a spaceship that squashes the titular character in Hamlet, a point-and-click puzzle adventure. Just before he sets out to stop his uncle, Hamlet finds himself used as an impromptu landing pad from the world's most bean-shaped time traveler. Fortunately, our (new) hero has a conscience and sets out to ensure that events in the well-known story happen the way they should, sort of, thus ensuring future generations of bored high-school students still have to write tedious book reports on it. Uh... hoo... ray? 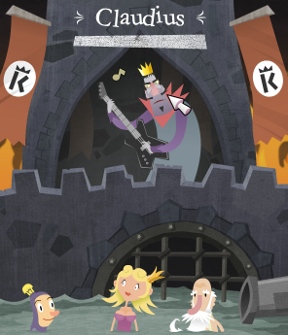 New Hamlet needs your help in order to progress through the story, which you will render by clicking on various objects on the screen and figuring out what order to do things in order to proceed. Sound familiar? Unlike Little Wheel, however, there is frequently very little indication of what you can interact with, and what that will do, so it falls to your undoubtedly massive brain to experiment to find the solutions. Some of which will actually require some small amount of quick thinking on your part; I mean, it's not as if that giant octopus is going to wait forever for you to make your move. Time to get KRAKEN!... anyone?... *sigh*

While most of the game revolves around figuring out whether you need to click the monkey or not the monkey, there are some puzzles to be solved. Most of them are fairly simple, once you figure out what the game is asking of you. A lack of dialogue makes this harder than it sounds, but once that moment of clarity strikes, it can be surprisingly satisfying. The best advice is to think like a cartoon character; if you have to start carrying around anvils and visualising people as giant talking hotdogs when you're hungry, then so be it.

Analysis: There's a lot to like about the oddball send-up of this literary classic. First and foremost is the crisp, cut-out style of the storybook visuals, and the simple, easy to access presentation that means anyone can pick it up. There's no spoken dialogue, so I might have preferred a soundtrack rather than ambient noise to liven things up a bit. (Perhaps a Looney Tunes style melody that follows the footsteps with plucks of violin strings?) The game even features boss battles won by solving oddball puzzles that deal damage to the cartoonish baddies. Much of the humour is subtle and simply taken from your environment. While older gamers may find the relatively low challenge and sweetie-pie look not to their taste, Hamlet is actually best enjoyed by the young at heart of those of you with small children who can fit on your lap while you play. Kids, it seems, are always the first to suss out the crazier solutions to any problem. I do not have a child. I have a very heavy cat who does not appreciate being held. He was somewhat... less helpful, though hairier. 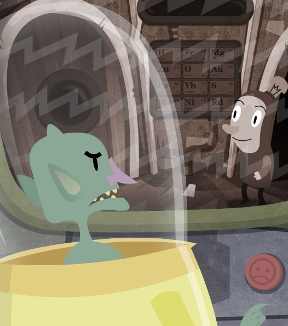 So what's the problem? Well, it's actually a bunch of small annoyances rather than any one real thing. The hint timer takes a long time to refill, so if you're stuck you might as well go catch up on your Dostoevsky while you're waiting. The cursor doesn't change when you pass it over objects, so the only way to tell sometimes what you can interact with is by everyone's favourite pastime, random clicking. To go back to the Little Wheel comparison, that game was often criticized by being too easy. Hamlet, by turn, can be more difficult simply because the logic at work can be so bizarre.

But perhaps the biggest issue people will have is that at only five acts the game feels exceptionally short. It really is the sort of thing you can sit and play through in about half an afternoon, and as such winds up feeling like it might have been better suited to a flash title. Still, while it lasts, this short and sweet title is a lot of fun, and well worth bringing any little ones you might have scurrying about the place in on. (At the very least it'll distract them long enough for you to throw out any Hannah Montana merchandise they might be holding on to.) So start firing up those neurons and warming up those clicking fingers! After all, one cannot simply walk into Mordor!... I mean, um, Elsinore. Same difference.

Well it finally happened - a Bigfish game that I completed within the free trial period.

Still, it was enjoyable while it lasted although the connection to Hamlet was minimal, bar the names.

Depressing to see so many spelling and grammar errors as well, considering there can't have been many more than 100 lines of text in the whole thing.

Yeah, I got up to the guitar challenge and even beat it and I thought, I bet I'm way over halfway through with this one. So I didn't buy it. Nice as a Samorost clone, but no sale.

I actually beat this game during the trial period as well but it just wasn't worth it.

I felt like it had nothing to really do with "Hamlet," it flew far off the original Shakespearean story line and it was just a really big turn off (even though i know "Hamlet" isn't too kid friendly). They could at least say it was INSPIRED by Shakespeare's "Hamlet" or something.


At most I'll give it a 2 out of 5 (the graphics were cute but the grammar and spelling...GOD AWFUL)

Romeo, Romeo, wherefor art thou an alien with a lightbulb attached to thy head?
Deny thy father and renounce thy name
Or if thou -

Wait, wait... that's another play. Danggit, but I thought that that was the one with the love story? Hamlet, well, Hamlet was just the one where everyone dies tragically.

The game itself, regardless of it's inconsistencies with the play, was fun, though I failed miserably at about half the puzzles. I got to meet death before it timed out.

Alas poor Kraken, I knew him, Horatio, a fellow of infinite jest,
and many, many tentacles...

Sometimes I will read lines like "Let's get KRAKEN!" and think to myself, "There is no way that this review is not written by Dora." Then I scroll up and smile.

That is one of the most frustrating games I have ever played. I was able to complete it, but not without a lot of anger. Not only is the game play a little too hard, but the story makes me want to cry. I was wary at first that it wouldn't be the original Hamlet story but Fie! Oh FIE! The English student in me was extremely pained.

Ok, I guess I'm an idiot because I can't get past the lock on Ophelia's cage....HELP!

the guitar bit is waaaay to difficult!!!! thats frustrating and i m definitly not going to buy it!