In the mood for something challenging and aesthetically pleasing? From the imagination of Pawel Mogila springs a new physics-based puzzle adventure game, Grimind. Pawel chose to give Grimind a horror twist, but forget the standard rattling chains, apparitions out of the corner of your eye, and overused scream clichés. This is a beautifully-colored adventure game with a physics engine serving up the puzzles. 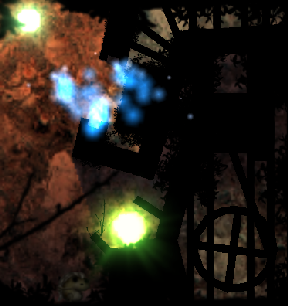 You play as a mild-mannered and rather polite lizard fellow who's being chased through the depths of abandoned caverns by a lot of tiny creatures that sport an uncanny resemblance to Domo-kun. These little guys apparently aren't cuddly and plush, and they have some kind of overwhelming need to... bite you, or attack you, or... well, something. It's never made quite clear, and when conversations with them consist only of a series of adorably savage little snarls and ROWRs it's probably best to just back away. Whatever's going on with them, they appear here and there during your adventure just long enough to hurry you along to the next part of the game.

And the game. As you explore the caverns you'll encounter abandoned parts and machinery, and much of the fun is in working out what they're for and how to restore them to functional condition in order to clear the level. Hydraulic pipes, levers, switches, ducts, elevators that need to be powered somehow... the levels have been crafted with a lot of forethought, and coming up with the solutions is a large part of the enjoyment value here. As are the hyper-intense particle colors, which are gorgeous! Not satisfied with the available options Pawel designed his own particle system for Grimind, resulting in a breathtaking subterranean wonderland that's very easy on the eyes and a joy to explore.