Pocketwatch getting slow? Household appliances grumbling at you in low tones? It may seem a little cramped to you and me, but we have it on good authority from Charlie Oscar that there actually are 'gremlins in the works': microscopic, urbane, amoral creatures infiltrating any machine or device they possibly can and then exploiting them to enact their own nefarious schemes in their tiny steampunk towns! If Terry Pratchett picked Monopoly and morally bankrupt tycoonism as his subject and made it a board and card game rather than a novel, the single and online multiplayer Gremlins, Inc. would be the result. In their miniature world of 'civilized' chicanery and subterfuge gremlins attempt to outdo each other for prestige, influence and lucre — typically spending more of their efforts pranking and sabotaging each others' agendas than accomplishing anything of their own. Bribing officials, rigging elections, attempting to build the occasional mechanical achievement for the prestige that brings with it, robbing each other blind and setting dirty traps to ensnare their competitors, the gremlin life is anything but simple and these little guys resemble political cartoon caricatures more than anything else. Despite its multiplayer aspects and its card game appearance, Gremlins, Inc. is a full, complete indie game without any in-app purchases whatsoever. Buy it the once, and it's yours for good.

The controls are mouse-based and rather than throwing dice, any of the cards in your hand can be used either to play or to move instead. There are spots on the map that will be familiar to anyone who's played Monopoly like payday spots, financial penalties and danger, but Gremlins, Inc. is a little more... competitive than that. For example you'll have the opportunity to throw other players in jail, bribe the Court to scuttle their political influence, or pick a Misfortune card for them. Sincere co-operation just doesn't seem to make much of an appearance in this game, except when one player is just breaths away from winning and then everyone can typically be relied upon to do everything they can to stop them. There are also a few very special areas on the board that you'll want to make a priority, and in addition to major cards being playable only when on a specific area they each appeal to different players' strategies. Frequenting the Bank enables you to invest cash on hand in order to raise the amount you receive whenever you pass an Income spot. Or you can spend turns working at the Office for some quick cash. There's an area where you can spend very special and overpowered dark cards to cause some major boons for yourself or major banes for other players — if you're willing to accept the heavy Malice points that accrue from your actions and will almost certainly come back to haunt you in a big way. Or you can pass up your chance to visit the Bank and, after oodles of financial penalty spots, waft around the Astral Plane where you can spend turns blissfully sloughing off your Malice points and accomplishing major quests for massive score boosts. Each game is a chance to explore dastardly new treacherous play styles we've probably all contemplated occasionally at one point or another in real life without the consequences and blowback for actually living them out. And hopefully, serve as a good reminder that every ignoble approach has some major drawbacks in one department or another. 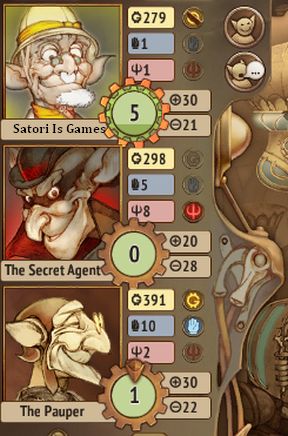 Even in its present Early Access form Gremlins, Inc. provides a very worthwhile play experience of madcap fantasy hijinks and whimsical cunning, but it also has a few, er, gremlins of its own that you should know about. While it claims elaborate strategies — and many are certainly possible — the major and unpredictable effects of random events and other players can drastically alter the situation in a single turn, which at times can make it about as strategic as a game of Chutes and Ladders. Play times can vary too, from around twenty minutes to a couple of hours regardless of whether you're playing online with others or single-player, but some game selections allow you to set time limits as win conditions — whoever's got the highest score after half an hour, for example. As of this writing there doesn't appear to be a way to save your game-in-progress under single-player mode and come back to it, and whether you're playing solo or with friends online it seems the entire game session halts and gets discarded the moment you lose your internet connection, but it seems likely these will be resolved before the game is released. Goblins, Inc. is still creative, engaging and well worth your hard-earned cash, priced at far less than physical board-and-card games even if you could find one quite like this. And it enables you to get a multiplayer session happening whenever you'd like, rather than whenever your friends happen to be available. At over two years in the making, the game's hand-painted board and card art is unparalleled and with its two hundred card deck — some of them so potent just being found with them in your hand can land you in Jail! — Gremlins, Inc. is intense and varied enough to provide plenty of replay value.