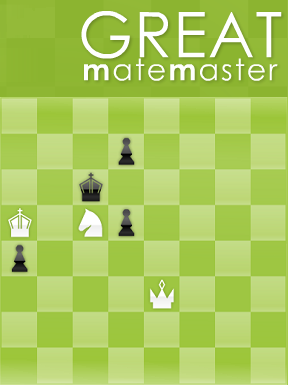 Chess: Favorite pastime of Machiavellian rulers, rogue Artificial Intelligences and cool old guys in the park. The game that Goethe proclaimed as the touchstone of intellect. The sea in which a gnat may drink and an elephant may bathe. The basis for programs as imposing as the human-crushing Deep Blue and as totally sweet as Interplay's Battle Chess. At JayIsGames, we're always on the lookout for quality casual versions of classic board games, and Alex Gagin's new release of Great MateMaster is just that. Like the previous less-great MateMaster, the focus here is on chess puzzles. Its huge wealth of content and polished presentation makes it something you should definitely check, mate.

Though regular chess play is available, endgame puzzles are Great MateMaster's raison d'etre, of the "Mate in 3" variety. You play as white, and clicking on a piece with the mouse shows all the possible moves for that piece. The goal is to checkmate the black king in the specified number of moves or less, which is to say to threaten the black king while preventing any possible means of his escape. There are some other rules, but that's the general gist... and with a good 16,000 puzzles to solve you'll have plenty of chances for practice.

Analysis: The AI in Great MateMaster is only fair, and shouldn't pose too much of a problem to stomp. This is appropriate for what the game sets out to do: one gets the feeling that its true purpose is not to pose a Kasparov-ian level challenge to the local grandmaster, nor to teach beginners the basics. If anything, this game is squarely aimed at helping the intermediate level player develop her skills. If you don't understand the basics of chess, Great MateMaster won't hold your hand. If you are an expert, the limitations of the game's engine may make it feel a trifle, even on fiendish. However, if you've been looking to boost the strategy of your endgame, Great MateMaster is the tutor for you. 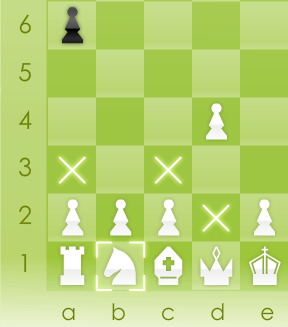 Naturally, it is easier to practice the beginning of a chess game than its conclusion: it takes 30 seconds to set up the pieces and hours to put them back in the box. This can lead to a noticeably spike in difficulty as players learn how to start a game, but not how to end it. While Great MateMaster is a fine puzzle game, it also, perhaps unintentionally,
functions surprisingly well as a trainer. With its literal thousands of likely and unlikely positions from which it challenges you to find checkmate, it can't help but educate your eye as to the nuances of the endgame.

The biggest stumbles for Great MateMaster come in trying to play a regular game. Minor stuff: not having an option to play as black against the CPU, or, for that matter, the ability to play against another person on the same computer. It's not game-breaking by any means, but there are some strange omissions. Likewise, it would have been nice to be able to view which problems are and aren't solved in a scrollable list form. Finally, while admittedly, games like this don't require sound at all, an affirming "ding" upon completion of a puzzle wouldn't have hurt.

There remains little to be said. Undoubtedly, Great MateMaster, as a work, appeals to a quite specific gaming niche. If you're not a chess fan, this game probably won't change your mind. However, if you are, it's as clear as black and white that you'll be wowed with quality and quantity. Reti or not, here it comes!

breezed through the first 85 levels (Mate in 1). Now there are another 1133 levels that I'm assuming are Mate in 2 moves, and that makes it a lot more difficult.

Doesn't seem to have an option for castling?

It does, but it's kind of weird. When in castling position, you can click the king and an "x" will appear over the rook. It's very hard to see due to the white-on-white, but clicking the rook then will castle it.

It didn't see the castle feature either, must have missed the 'X', but it is missing 'en passant'.

For an occasional chess player like me this is a very good game to stay sharp using the puzzle mode or if you just want to try and learn different strategies.

For example, in the first Mate in 2 moves: