Once in a while a game comes along that, well, you don't really know how to describe. Great Adventures: Lost in Mountains is one of those games. Designed by Fenomen Games, Great Adventures is advertised as a time management game. Actually, it's more like a casual sim. No, it's more like a point-and-click adventure with casual sim and time management elements. But really, it plays like a room escape game with RPG and hidden object elements. See? Difficult to describe. Basically, all of the above is incorporated to make one wildly fun, inventive game. 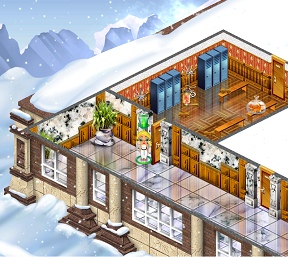 As the game begins, your characters (a male and female, chosen from several different avatars) are driving along an icy road somewhere in the mountains. The woman receives an urgent phone call from her father who begs for help before his call abruptly ends. Despite the worsening weather conditions, our intrepid heroine and her sidekick race to the scene. Perhaps too fast, as within seconds the car goes out of control and our heroes are stranded outside a nearby hotel. First order of business? Find a way inside to get out of the cold!

A faithful doggy companion soon joins you who, coincidentally, will also walk you through a quick gameplay tutorial. All you have to do is find a key to the storage shed. Then a shovel to dig the snow from the hotel door. Then a key to the front door. Then... well, you get the picture. Once inside you make your way through numerous locked doors trying to find out what happened to your father and his mysterious new invention.

Just to make things interesting, your characters also have needs. Needs like food, sleep, and fun. In fact, if those needs aren't met, they will slow down and eventually grind to a halt. Along with all the exploration, you must figure out how to feed, rest, and entertain the little folks. There's also mini-puzzles (which can be skipped after a certain amount of time has passed) to complete. Plenty to keep you busy! 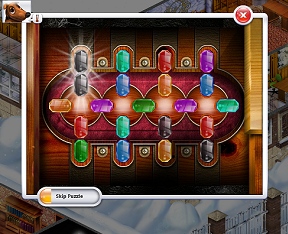 You can move through the game in several ways, including bumping the cursor against the edge of the screen or by right clicking and dragging empty ground. There's also a handy overview map you can click to quick-jump to any area. Moving your characters is just as simple, allowing you to click and direct or drag and drop people where you need them to be. Useful items will stow themselves in your inventory at the bottom of the screen, easy to keep track of and use when later needed. There's also a handy "goals" screen to help you track which tasks need to be done.

Your faithful puppy pal sticks around after the tutorial, serving up a bone-fueled hint system to sniff out items you need to complete puzzles. And there are a lot of items to be had, including items to combine, items to use, items to take care of your characters' needs, and items that serve as clues to progress the story. You'll also find trophy items such as butterflies, ladybugs, lanterns and so on, all of which can be used to spruce up your very own quiet little zen space.

Analysis: One would think that this kitchen sink approach to game design would produce an incomprehensible mess of a final product. Pick a genre, amirite? Quite the opposite, actually. Great Adventures: Lost in Mountains combines all of its varied elements into one big bundle of amazing casual gameplay, although it will appeal most to those who enjoy point-and-click adventures. Is there any type of casual game Fenomen Games missed when putting this little beauty together? Well, there's no marble popping or match-3 to be had, but otherwise, doesn't look like it. 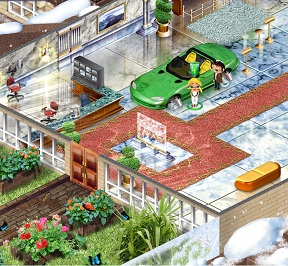 The cuteness levels reach almost toothache-inducing level with your little character avatars (and doggy companion) as they wander around and perform tasks at your direction (or run outside to take care of doggy business, as it were). Each character has strengths and weaknesses, so a task that one cannot do another may be able to accomplish, and vice versa. Marvel as they get down and funky in the disco; fret when they begin to droop if their needs aren't met; and laugh as they start to shiver if you leave them out in the cold too long. Well, for that last bit, if you're feeling sadistic, that is. Add in a lively soundtrack and background noises and you get one fantastic experience.

Are there downsides? A few minor ones. Even with the handy goals tabulator it can be difficult in the later stages of the game to keep track of areas that need to be explored and items in your inventory. In a room crowded with things to pick up or interact with it can be a little difficult to get your character to go to the correct one. A few inconsistencies occasionally appear, such as in the end scene when the characters talking are sometimes not the ones you started out with.

The minor downsides don't detract much from what is, frankly, a unique and entertaining gameplay experience. Great Adventures: Lost in Mountains is adorable, fun, and challenging, everything that you could want in a game. Get ready to explore, solve the mystery, and don't forget to throw the helpful doggy a bone every once in a while.

This is an extremely cool game. Played it through before the new year, and loved it.

Didn't take me long to complete, but the puzzles were challenging.

- Some of the puzzles are America-oriented. How is the international community supposed to know the fourth President of the USA? They could've picked something more obvious like Lincoln or Washington.
- That dog gets annoying when it decides you've taken too long solving a problem (usually in my case this was because I was looking around the screen to find out if I'd missed any bonus items). If you're in the middle of a methodical search, suddenly being snapped away and forced to follow a dog on its travels to where the game thinks you should be is NOT nice. It's also completely unnecessary when you have a voluntary hint request system.
- When you select the wrong character to do something, then select the right one using the portraits, it snaps the view to that character, so that you then have to find the target again. That's only a niggling annoyance.

- Logical gameplay, for the most part. I was able to work out most puzzles without resorting to Google or walkthroughs etc.
- Decent interface, mostly easy to use apart from the snap-to-character and here-let-me-hint-this-for-you-without-being-asked stuff I mentioned above.
- OK graphics. Could have been better, but I suppose this IS a hidden object game.
- Lack of timer! For once a HOG that DOESN'T want to make you complete it in X seconds. The hidden objects weren't too difficult to find (with my eyesight that's a blessing), and part of this was because the absence of a time limit removed a lot of pressure.

Short, but fun during the time in which it was played.

I found it interesting that you had to use a different character to do some things, but also slightly annoying at times.

I think I need a bigger and more informative map, though. I had to resort to hints for some puzzles because I forgot where they were.

I have to agree with Jim, the dog was super annoying. The hint system is also not very well balanced. Between the "objectives" which I tried to click away as soon as they showed up, but couldn't help seeing a bit of, and the dog, the whole thing was entirely too easy.

That said, it was terribly cute, and very fun to play. Thanks for linking it!

This was a cute, fun game. It only took about an hour, maybe an hour and a half, to complete, but I enjoyed it -- except for the dog, who was annoying.

This game is easy it only takes me less than a day to finish it.

1,410 Views
0 Comments
chrpa— Jayisgames needs your help to continue providing quality content. Click for details Welcome to Mobile Monday! The latest game by GBFinger Studio is out so their app has 37 games now. Apartment Bacon (Sakiko Seo) too released a new...  ...

4,815 Views
6 Comments
chrpa— Jayisgames needs your help to continue providing quality content. Click for details The latest escape game by Rinnogogo arrived! The magical land you are supposed to escape, hides many secrets and some stay unexplained...maybe you are trying to leave...  ...